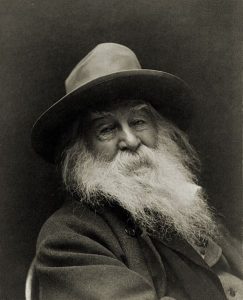 WHITMAN, WALTER or WALT (1819-1892). —Poet, was born at Huntingdon, Long Island, New York. His mother was of Dutch descent, and the farm on which he was born had been in the possession of his father’s family since the early settlement. His first education was received at Brooklyn, to which his father had removed while Whitman was a young child.

At 13 he was in a printing office, at 17 he was teaching and writing for the newspapers, and at 21 was editing one. The next dozen years were passed in desultory work as a printer with occasional literary excursions, but apparently mainly in “loafing” and observing his fellow-creatures. It was not till 1855 that his first really characteristic work, Leaves of Grass, appeared. This first ed. contained only 12 poems. Notwithstanding its startling departures from conventionality both in form and substance it was well received by the leading literary reviews and, with certain reserves to be expected, it was welcomed by Emerson. It did not, however, achieve general acceptance, and was received with strong and not unnatural protest in many quarters. When a later editor was called for Emerson unsuccessfully endeavored to persuade the author to suppress the more objectionable parts.

On the outbreak of the Civil War Whitman volunteered as a nurse for the wounded, and rendered much useful service. The results of his experiences and observations were given in verse in Drum Taps and The Wound Dresser, and in prose in Specimen Days. From these scenes he was removed by his appointment to a Government clerkship, from which, however, he was soon dismissed on the ground of having written books of an immoral tendency. This action of the authorities led to a somewhat warm controversy, and after a short interval Whitman received another Government appointment, which he held until 1873, when he had a paralytic seizure, which rendered his retirement necessary.

Other works besides those mentioned are Two Rivulets and Democratic Vistas. In his later years he retired to Camden, New Jersey, where he died. Whitman is the most unconventional of writers. Revolt against all convention was in fact his self-proclaimed mission. In his versification he discards rhyme almost entirely, and metre as generally understood. And in his treatment of certain passions and appetites, and of unadulterated human nature, he is at war with what he considered the conventions of an effeminate society, in which, however, he adopts a mode of utterance which many people consider equally objectionable, overlooking, as he does, the existence through all the processes of nature of a principle of reserve and concealment. Amid much that is prosaic and rhetorical, however, it remains true that there is real poetic insight and an intense and singularly fresh sense of nature in the best of his writings.