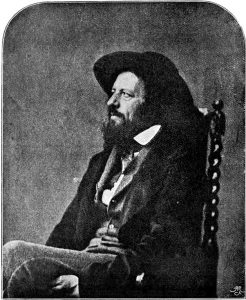 TENNYSON, ALFRED, 1ST LORD (1809-1892). —Poet, was the fourth son of George Tennyson, Rector of Somersby, Lincolnshire, where he was born. His father was himself a poet of some skill, and his two elder brothers, Frederick Tennyson and Charles T. Turner, were poets of a high order. His early education was received from his father, after which he went to the Grammar School of Louth, whence in 1828 he proceeded to Trinity Coll., Camb. In the previous year had appeared a small volume, Poems by Two Brothers, chiefly the work of his brother Charles and himself, with a few contributions from Frederick, but it attracted little attention. At the University he was one of a group of highly gifted men, including Trench, Monckton Milnes, afterwardsLord Houghton, Alford, Lushington, his future brother-in-law, and above all, Arthur Hallam, whose friendship and early death were to be the inspiration of his greatest poem. In 1829 he won the Chancellor’s medal by a poem on Timbuctoo, and in the following year he brought out his first independent work, Poems chiefly Lyrical. It was not in general very favourably received by the critics, though Wilson in Blackwood’s Magazine admitted much promise and even performance. In America it had greater popularity.

Part of 1832 was spent in travel with Hallam, and the same year saw the publication of Poems, which had not much greater success than its predecessor. In the next year Hallam died, and Tennyson began In Memoriam and wrote The Two Voices. He also became engaged to Emily Sellwood, his future wife, but owing to various circumstances their marriage did not take place until 1850. The next few years were passed with his family at various places, and, so far as the public were concerned, he remained silent until 1842, when he published Poems in two volumes, and at last achieved full recognition as a great poet. From this time the life of Tennyson is a record of tranquil triumph in his art and of the conquest of fame; and the publication of his successive works became almost the only events which mark his history. The Princess appearing in 1847 added materially to his reputation: in the lyrics with which it is interspersed, such as “The Splendour Falls” and “Tears, idle Tears” he rises to the full mastery of this branch of his art. The year 1850 was perhaps the most eventful in his life, for in it took place his marriage which, as he said, “brought the peace of God into his life,” his succession to the Laureateship on the death of Wordsworth, and the publication of his greatest poem, In Memoriam.

In 1852 appeared his noble Ode on the Death of the Duke of Wellington; and two years later The Charge of the Light Brigade. The publication of Maud in 1855 gave his rapidly growing popularity a perceptible set-back, though it has since risen in favour. But this was far more than made up for by the enthusiasm with which the first set of The Idylls of the King was received on its appearance four years later. Enoch Arden, with the Northern Farmer, came out in 1864; The Holy Grail and Gareth and Lynette, both belonging to the Idyll series, in 1869 and 1872 respectively. Three years later in 1875 Tennyson broke new ground by beginning a series of dramas with Queen Mary, followed by Harold (1876), The Falcon (1879), The Cup (1881), The Promise of May (1882), Becket (1884), and Robin Hood (1891). His later poems were The Lovers’ Tale (1879) (an early work retouched), Tiresias (1885), Locksley Hall—60 Years after (1886), Demeter and other Poems (1889), including “Crossing the Bar,” and The Death of Œnone (1892). Tennyson, who cared little for general society, though he had many intimate and devoted friends, lived at Farringford, Isle of Wight, from 1853-69, when he built a house at Aldworth, near Haslemere, which was his home until his death. In 1884 he was raised to the peerage. Until he had passed the threescore years and ten he had, with occasional illnesses, enjoyed good health on the whole. But in 1886 the younger of his two sons died, a blow which told heavily upon him; thereafter frequent attacks of illness followed, and he died on October 6, 1892, in his 84th year, and received a public funeral in Westminster Abbey.

The poetry of Tennyson is characterised by a wide outlook, by intense sympathy with the deepest feelings and aspirations of humanity, a profound realisation of the problems of life and thought, a noble patriotism finding utterance in such poems as The Revenge, the Charge of the Light Brigade, and the Ode on the Death of the Duke of Wellington, an exquisite sense of beauty, marvellous power of vivid and minute description often achieved by a single felicitous phrase, and often heightened by the perfect matching of sense and sound, and a general loftiness and purity of tone. No poet has excelled him in precision and delicacy of language and completeness of expression. As a lyrist he has, perhaps, no superiors, and only two or three equals in English poetry, and even of humour he possessed no small share, as is shown in the Northern Farmer and in other pieces. When the volume, variety, finish, and duration of his work are considered, as well as the influence which he exercised on his time, a unique place must be assigned him among the poets of his country.