Halloween, A Poem by Robert Burns 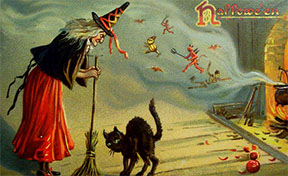 Halloween or, more correctly, Hallowe’en, celebrated on October 31st, marks the last day of the year on the ancient Celtic calendar, its night being the time when all witches and warlocks walked abroad and engaged in wicked revelry. With the coming of Christianity, the feast was transformed into the Eve of All Hallows, or All Saints. The following poem by Robert Burns is a good indication of how pre-Christian Halloween beliefs and traditions survived well into the Christian era.

Upon that night, when fairies light
On Cassilis Downans dance,
Or owre the lays, in splendid blaze,
On sprightly coursers prance;
Or for Colean the route is ta’en,
Beneath the moon’s pale beams;
There, up the cove, to stray and rove,
Among the rocks and streams
To sport that night.

Among the bonny winding banks,
Where Doon rins, wimplin’ clear,
Where Bruce ance ruled the martial ranks,
And shook his Carrick spear,
Some merry, friendly, country-folks,
Together did convene,
To burn their nits, and pou their stocks,
And haud their Halloween
Fu’ blithe that night.

Then, first and foremost, through the kail,
Their stocks maun a’ be sought ance;
They steek their een, and graip and wale,
For muckle anes and straught anes.
Poor hav’rel Will fell aff the drift,
And wander’d through the bow-kail,
And pou’t, for want o’ better shift,
A runt was like a sow-tail,
Sae bow’t that night.

Then, staught or crooked, yird or nane,
They roar and cry a’ throu’ther;
The very wee things, todlin’, rin,
Wi’ stocks out owre their shouther;
And gif the custoc’s sweet or sour.
Wi’ joctelegs they taste them;
Syne cozily, aboon the door,
Wi cannie care, they’ve placed them
To lie that night.

The lasses staw frae ‘mang them a’
To pou their stalks of corn:
But Rab slips out, and jinks about,
Behint the muckle thorn:
He grippet Nelly hard and fast;
Loud skirl’d a’ the lasses;
But her tap-pickle maist was lost,
When kitlin’ in the fause-house
Wi’ him that night.

The auld guidwife’s well-hoordit nits,
Are round and round divided,
And monie lads’ and lasses’ fates
Are there that night decided:
Some kindle coothie, side by side,
And burn thegither trimly;
Some start awa, wi’ saucy pride,
And jump out-owre the chimlie
Fu’ high that night.

Jean slips in twa wi’ tentie ee;
Wha ’twas she wadna tell;
But this is Jock, and this is me,
She says in to hersel:
He bleezed owre her, and she owre him,
As they wad never mair part;
Till, fuff! he started up the lum,
And Jean had e’en a sair heart
To see’t that night.

Poor Willie, wi’ his bow-kail runt,
Was brunt wi’ primsie Mallie;
And Mallie, nae doubt, took the drunt,
To be compared to Willie;
Mall’s nit lap out wi’ pridefu’ fling,
And her ain fit it brunt it;
While Willie lap, and swore by jing,
‘Twas just the way he wanted
To be that night.

Nell had the fause-house in her min’,
She pits hersel and Rob in;
In loving bleeze they sweetly join,
Till white in ase they’re sobbin’;
Nell’s heart was dancin’ at the view,
She whisper’d Rob to leuk for’t:
Rob, stowlins, prie’d her bonny mou’,
Fu’ cozie in the neuk for’t,
Unseen that night.

But Merran sat behint their backs,
Her thoughts on Andrew Bell;
She lea’es them gashin’ at their cracks,
And slips out by hersel:
She through the yard the nearest taks,
And to the kiln goes then,
And darklins graipit for the bauks,
And in the blue-clue throws then,
Right fear’t that night.

And aye she win’t, and aye she swat,
I wat she made nae jaukin’,
Till something held within the pat,
Guid Lord! but she was quakin’!
But whether ‘was the deil himsel,
Or whether ’twas a bauk-en’,
Or whether it was Andrew Bell,
She didna wait on talkin’
To spier that night.

Wee Jennie to her grannie says,
“Will ye go wi’ me, grannie?
I’ll eat the apple at the glass
I gat frae Uncle Johnnie:”
She fuff’t her pipe wi’ sic a lunt,
In wrath she was sae vap’rin’,
She notice’t na, an aizle brunt
Her braw new worset apron
Out through that night.

“Ye little skelpie-limmer’s face!
I daur you try sic sportin’,
As seek the foul thief ony place,
For him to spae your fortune.
Nae doubt but ye may get a sight!
Great cause ye hae to fear it;
For mony a ane has gotten a fright,
And lived and died deleeret
On sic a night.

“Ae hairst afore the Sherramoor, —
I mind’t as weel’s yestreen,
I was a gilpey then, I’m sure
I wasna past fifteen;
The simmer had been cauld and wat,
And stuff was unco green;
And aye a rantin’ kirn we gat,
And just on Halloween
It fell that night.

“Our stibble-rig was Rab M’Graen,
A clever sturdy fallow:
His son gat Eppie Sim wi’ wean,
That lived in Achmacalla:
He gat hemp-seed, I mind it weel,
And he made unco light o’t;
But mony a day was by himsel,
He was sae sairly frighted
That very night.”

Then up gat fechtin’ Jamie Fleck,
And he swore by his conscience,
That he could saw hemp-seed a peck;
For it was a’ but nonsense.
The auld guidman raught down the pock,
And out a hanfu’ gied him;
Syne bade him slip frae ‘mang the folk,
Some time when nae ane see’d him,
And try’t that night.

He marches through amang the stacks,
Though he was something sturtin;
The graip he for a harrow taks.
And haurls it at his curpin;
And every now and then he says,
“Hemp-seed, I saw thee,
And her that is to be my lass,
Come after me, and draw thee
As fast this night.”

He whistled up Lord Lennox’ march
To keep his courage cheery;
Although his hair began to arch,
He was say fley’d and eerie:
Till presently he hears a squeak,
And then a grane and gruntle;
He by his shouther gae a keek,
And tumbled wi’ a wintle
Out-owre that night.

He roar’d a horrid murder-shout,
In dreadfu’ desperation!
And young and auld came runnin’ out
To hear the sad narration;
He swore ’twas hilchin Jean M’Craw,
Or crouchie Merran Humphie,
Till, stop! she trotted through them
And wha was it but grumphie
Asteer that night!

Meg fain wad to the barn hae gaen,
To win three wechts o’ naething;
But for to meet the deil her lane,
She pat but little faith in:
She gies the herd a pickle nits,
And two red-cheekit apples,
To watch, while for the barn she sets,
In hopes to see Tam Kipples
That very nicht.

She turns the key wi cannie thraw,
And owre the threshold ventures;
But first on Sawnie gies a ca’
Syne bauldly in she enters:
A ratton rattled up the wa’,
And she cried, Lord, preserve her!
And ran through midden-hole and a’,
And pray’d wi’ zeal and fervour,
Fu’ fast that night;

They hoy’t out Will wi’ sair advice;
They hecht him some fine braw ane;
It chanced the stack he faddom’d thrice
Was timmer-propt for thrawin’;
He taks a swirlie, auld moss-oak,
For some black grousome carlin;
And loot a winze, and drew a stroke,
Till skin in blypes cam haurlin’
Aff’s nieves that night.

A wanton widow Leezie was,
As canty as a kittlin;
But, och! that night amang the shaws,
She got a fearfu’ settlin’!
She through the whins, and by the cairn,
And owre the hill gaed scrievin,
Whare three lairds’ lands met at a burn
To dip her left sark-sleeve in,
Was bent that night.

Among the brackens, on the brae,
Between her and the moon,
The deil, or else an outler quey,
Gat up and gae a croon:
Poor Leezie’s heart maist lap the hool!
Near lav’rock-height she jumpit;
but mist a fit, and in the pool
Out-owre the lugs she plumpit,
Wi’ a plunge that night.

In order, on the clean hearth-stane,
The luggies three are ranged,
And every time great care is ta’en’,
To see them duly changed:
Auld Uncle John, wha wedlock joys
Sin’ Mar’s year did desire,
Because he gat the toom dish thrice,
He heaved them on the fire
In wrath that night.

There’s now a translation of the above poem into Belorussian – how cool is that?  Go to http://webhostinggeeks.com/science/halloween-be

There is also a translation into French, which works very well for this poem – please visit https://worldliterate.com/translations/halloween.htm

Of Apples and Mirrors

It would take a great deal more space (and a far better Burns scholar than myself) to explain all the references in Burns’ poem that, to us, might seem obscure.   One observation I would like to make concerns Jennie’s desire to “eat the apple at the glass,” and her grannie’s stern rejection of the idea.  This passage relates to an ancient superstition related to mirror magic, which held that if a young woman ate an apple in front of a looking-glass on Halloween the face of the man whom she was destined to marry would appear.  Grannie obviously thought such activity to be the work of the deil – er, devil.

The origins of this belief may relate back to Celtic grail legends, where “apples” were sometimes used to describe (and later confused with) magical crystals.  The combination of a crystal and a mirror may have indeed been used for scrying.  For a more in-depth discussion of this, see Flavia Anderson’s The Ancient Secret: Fire From the Sun.  That some of these customs were carried to the New World is evidenced by this passage from Mary E Blain’s Games for Hallowe’en, first published in New York in 1912:

MIRROR AND APPLE
Stand in front of mirror in dimly lighted room and eat an apple. If your lover reciprocates your love he will appear behind you and look over your right shoulder and ask for a piece of apple.

(For the complete text of this interesting work on Halloween games, click here.)

At any event, the folks in Burns’ poem generally had a good time at Hallowe’en, as we all should. Just remember to stay away from unwrapped candy, and don’t eat any hemp-seed.

While Burns’ poem deals directly with the subject of Halloween, the poem that Americans are most likely to hear read aloud during the Halloween season is probably Edgar Allan Poe’s The Raven.

Interesting note about Halloween, that has nothing to do with Burns’ poem (or Poe’s, for that matter): folks in England and Ireland used to carve out beets, potatoes and turnips for lanterns on Halloween.