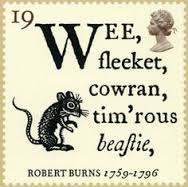 BURNS, ROBERT (1759-1796). —Poet, was born near Ayr, the son of William Burness or Burns, a small farmer, and a man of considerable force of character and self-culture. His youth was passed in poverty, hardship, and a degree of severe manual labour which left its traces in a premature stoop and weakened constitution. He had little regular schooling, and got much of what education he had from his father, who taught his children reading, writing, arithmetic, geography, and history, and also wrote for them “A Manual of Christian Belief.” With all his ability and character, however, the elder Burns was consistently unfortunate, and migrated with his large family from farm to farm without ever being able to improve his circumstances. In 1781 Robert went to Irvine to become a flax-dresser, but, as the result of a New Year carousal of the workmen, including himself, the shop took fire and was burned to the ground. This venture accordingly came to an end. In 1784 the father died, and Burns with his brother Gilbert made an ineffectual struggle to keep on the farm; failing in which they removed to Mossgiel, where they maintained an uphill fight for 4 years. Meanwhile, his love affair with Jean Armour had passed through its first stage, and the troubles in connection therewith, combined with the want of success in farming, led him to think of going to Jamaica as bookkeeper on a plantation. From this he was dissuaded by a letter from Dr. Thomas Blacklock, and at the suggestion of his brother published his poems. This first edition was brought out at Kilmarnock in June 1786, and contained much of his best work, including “The Twa Dogs,” “The Address to the Deil,” “Hallowe’en,” “The Cottar’s Saturday Night,” “The Mouse,” “The Daisy,” etc., many of which had been written at Mossgiel. Copies of this edition are now extremely scarce.

The success of the work was immediate, the poet’s name rang over all Scotland, and he was induced to go to Edin. to superintend the issue of a new ed. There he was received as an equal by the brilliant circle of men of letters which the city then boasted—Dugald Stewart, Robertson, Blair, etc., and was a guest at aristocratic tables, where he bore himself with unaffected dignity. Here also Scott, then a boy of 15, saw him and describes him as of “manners rustic, not clownish. His countenance … more massive than it looks in any of the portraits … a strong expression of shrewdness in his lineaments; the eye alone indicated the poetical character and temperament. It was large, and of a dark cast, and literally glowed when he spoke with feeling or interest.” The results of this visit outside of its immediate and practical object, included some life-long friendships, among which were those with Lord Glencairn and Mrs. Dunlop. The new edition brought him £400. About this time the episode of Highland Mary occurred. On his return to Ayrshire he renewed his relations with Jean Armour, whom he ultimately married, took the farm of Ellisland near Dumfries, having meanwhile taken lessons in the duties of an exciseman, as a line to fall back upon should farming again prove unsuccessful. At Ellisland his society was cultivated by the local gentry. And this, together with literature and his duties in the excise, to which he had been appointed in 1789, proved too much of a distraction to admit of success on the farm, which in 1791 he gave up.

Meanwhile he was writing at his best, and in 1790 had produced Tam o’ Shanter. About this time he was offered and declined an appointment in London on the staff of the Star newspaper, and refused to become a candidate for a newly-created Chair of Agriculture in the University of Edinburgh, although influential friends offered to support his claims. After giving up his farm he removed to Dumfries. It was at this time that, being requested to furnish words for The Melodies of Scotland, he responded by contributing over 100 songs, on which perhaps his claim to immortality chiefly rests, and which placed him in the front rank of lyric poets. His worldly prospects were now perhaps better than they had ever been; but he was entering upon the last and darkest period of his career. He had become soured, and moreover had alienated many of his best friends by too freely expressing sympathy with the French Revolution, and the then unpopular advocates of reform at home. His health began to give way; he became prematurely old, and fell into fits of despondency; and the habits of intemperance, to which he had always been more or less addicted, grew upon him. He died on July 21, 1797.

The genius of Burns is marked by spontaneity, directness, and sincerity, and his variety is marvellous, ranging from the tender intensity of some of his lyrics through the rollicking humour and blazing wit of Tam o’ Shanter to the blistering satire of Holy Willie’s Prayer and The Holy Fair. His life is a tragedy, and his character full of flaws. But he fought at tremendous odds, and as Carlyle in his great Essay says, “Granted the ship comes into harbour with shrouds and tackle damaged, the pilot is blameworthy … but to know how blameworthy, tell us first whether his voyage has been round the Globe or only to Ramsgate and the Isle of Dogs.”

Thanks to Margaréta Sliwka, there is now a Slovak translation of this page.

Thanks to Sandi Wolfe, there is now a Russian translation of this page.

Thanks to Elsa Jansson, there is now a Finnish translation of this page.