Does God Make Use of Evil Spirits? 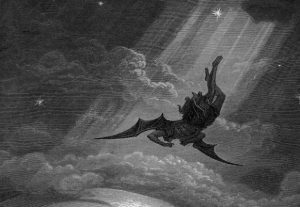 Quite some time ago, in an article on demonology, I asked this somewhat rhetorical question: Does God ever make use of demons?  I didn’t really expect an answer to the question – and, perhaps, one might not want a definitive answer – but I have had some interesting discussions concerning the idea, and thought it might be time to devote more than a brief paragraph to the issue.

What prompted the question originally was the story of Sara in the Book of Tobias, Sara being a woman widowed no less than seven times in short order, concerning which the Catholic Encyclopedia states that “God allowed the demon to slay these men because they entered marriage with unholy motives,”  and that “the permission given by God to the demon in this history seems to have as a motive to chasten man’s lust and sanctify marriage.”  Tobias – soon to be husband number eight – was, understandably, a little nervous about the the whole husbands-keep-dying thing.  It was an angel that suggested to Tobias that he should marry Sara, and we pick up the story from there:

Then Tobias answered, and said: I hear that she hath been given to seven husbands, and they all died: moreover I have heard, that a devil killed them. Now I am afraid, lest the same thing should happen to me also: and whereas I am the only child of my parents, I should bring down their old age with sorrow to hell.

Then the angel Raphael said to him: Hear me, and I will shew thee who they are, over whom the devil can prevail. For they who in such manner receive matrimony, as to shut out God from themselves, and from their mind, and to give themselves to their lust, as the horse and mule, which have not understanding, over them the devil hath power. But thou when thou shalt take her, go into the chamber, and for three days keep thyself continent from her, and give thyself to nothing else but to prayers with her.

One could argue that there is a difference between the devil having power over sinners (not a new idea), versus God giving permission to a demon to go around knocking off lust-filled suitors.  At any rate, things have obviously lightened up quite a bit since Tobias’ time, or the demon in question, Asmodeus, would be working overtime in 21st century Las Vegas.

Carrigan V., a reader of this website, recently wrote in and had this to say:

In your page on demonology you have a section about whether or not God uses demons to assist in His work. I would like to suggest maybe adding the story of Ahab to your sight. In 1 Kings 22:20-23, the Bible tells a story of God in his court. God had asked who would go and persuade Ahab to fall at Ramoth-Gilead. A lying spirit approaches His throne and suggests that he go. Though a demon is not specifically mentioned here, it is clear that God can send an evil spirit upon an evil person. That’s just a suggestion, thank you for your time.

20: And the LORD said, Who shall persuade Ahab, that he may go up and fall at Ramoth-gilead? And one said on this manner, and another said on that manner.
21: And there came forth a spirit, and stood before the LORD, and said, I will persuade him.
22: And the LORD said unto him, Wherewith? And he said, I will go forth, and I will be a lying spirit in the mouth of all his prophets. And he said, Thou shalt persuade him, and prevail also: go forth, and do so.
23: Now therefore, behold, the LORD hath put a lying spirit in the mouth of all these thy prophets, and the LORD hath spoken evil concerning thee.

It isn’t my place to draw any conclusions here, but simply to provide food for thought.  Let’s end this with some further questions: if God did, in the past, make use of evil spirits in fighting evil, does He continue to do so today?  If so, how?  And does God similarly make use of evil (or, at least, not very nice) humans?  And, if an evil human ends up doing God’s will, does that count in his favor at some point?