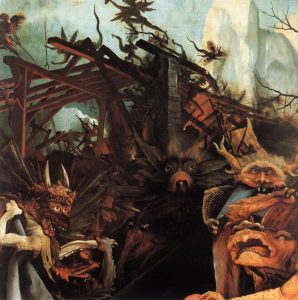 The other shape,
If shape it might be call’d, that shape had none,
Distinguishable in member, joint, or limb;
Or substance might be call’d that shadow seem’d;
For each seem’d either; black it stood as night,
Fierce as ten furies, terrible as Hell,
And shook a dreadful dart; what seem’d his head
The likeness of a kingly crown had on.
Satan was now at hand; and from his seat
The monster, moving onward, came as fast
With horrid strides; Hell trembled as he strode.”
–– John Milton

The term “demons” was not always understood to have the absolutely negative connotation that it does today.  Homer used the terms “demons” and “gods” more or less interchangeably.  Another opinion was that demons were intermediaries between men and gods, and that demons had once been men.  Plutarch speaks of “human souls as commencing, first heroes, then demons, and afterward as advancing to a more sublime degree.”   Philo of Byblus seems to draw on this same tradition when he states that, “The most ancient of the barbarians, especially the Phoenicians and Egyptians, from whom other people derived this custom, accounted those the greatest gods who had found out things most necessary and useful in life — and had been benefactors to mankind.”

Our current use of the term “demon” is to denote a malignant spirit, and comes to us primarily form New Testament writers.  However, there is still uncertainty as to whether or not demons are considered to be distinct and separate from the Devil and his fallen angels.

Demon possession – that is, a human who has become inhabited or “taken over” by a demon and who cannot, consequently, exercise his own will –  is  noted in the New Testament, specifically in Mark, Chapter 5, ver. 12.  Josephus also mentions a method of exorcism prescribed by Solomon, which had “prevailed or succeeded greatly among them down to the present time.”  Unfortunately, Josephus does not describe the method used.

There is little doubt that most of what was described in older times as “demon possession” would today be diagnosed as some sort of mental illness, and treated accordingly.  Nevertheless, a few cases of possession do seem to crop up from time to time, and the Roman Catholic Church does continue (sparingly) to perform exorcisms.

Some historians of times past believed that there were cycles during which demonic activity increased, and used this theory to explain various occurrences, much in the same way as today’s economic historians might explain historical events in terms of trade, productivity and other factors.  These older historians saw a rise in demonic activity accompanying such occurrences as the destruction of Jerusalem, the fall of Rome and the French Revolution, and would in all likelihood also have viewed the demonic theory at work in relation to the rise of Nazism and World War II.

Ancients also had a sort of faith in the prophetic words spoken by those whom they believed to be possessed by demons, and this was sometimes a component of ancient oracles.  In connection with this, it is worth pointing out that a respected modern-day professor of psychology once witnessed a friend, who was suffering from paranoid schizophrenia make a specific and surprising prophecy that turned out to be perfectly accurate.  The professor had no explanation for this event. although one is tempted to hypothesize that there is a link between altered mental states and psychic ability.  Some also associate the ouija board with demoniacal prophesy, and those who have seen Linda Blair in The Exorcist will recall that this was how her character’s problems began.

Species of Demons, as Described by Alphonse de Spina (1467)

Correspondence of Demons to the Seven Deadly Sins

And I summoned again to stand before me Beelzeboul, the prince of demons, and I sat him down on a raised seat of honour, and said to him: “Why art thou alone, prince of the demons?”  And he said to me: “Because I alone am left of the angels of heaven that came down.  For I was first angel in the first heaven, being entitled Beelzeboul.  And now I control all who are bound in Tartarus . . . “

I Solomon said unto him: “Beelzeboul, what is thy employment?”  And he answered me: “I destroy kings.  I ally myself with foreign tyrants.  And my own demons I set on to men, in order that the latter may believe in them and be lost.  And the chosen servants of God, priests and faithful men, I excite unto desires for wicked sins, and evil heresies, and lawless deeds; and they obey me, and I bear them on to destruction.  And I inspire men with envy, and murder, and for wars and sodomy, and other evil things.  And I will destroy the world . . . “

I said to him: “Tell me by what angel thou art frustrated.”  And he answered: “By the holy and precious name of the Almighty God, called by the Hebrews by a row of numbers, of which the sum is 644, and among the Greeks it is Emmanuel.   And if one of the Romans adjure me by the name of the power Eleêth, I disappear at once.”

“These beings, because of pride, did not return God’s love. God did not destroy them, but permits them a limited scope of activity. Their condition is permanent for no creature can turn away from the perfect good of the beatific vision once he has come to enjoy it, and no additional reflection could change the mind of a purely spiritual being who has turned away.”

Does God Ever Make Use of Demons?

Before answering “no,” one might wish to refer to the Book of Tobias.  In it, a virgin named Sara weds, only to have her husband slain by the demon Asmodeus on her wedding night.  Sara, still a virgin, marries again, and the same thing happens.  Actually, the same thing occurs a total of seven times.  Then Tobias marries Sara – this would make him the young woman’s eighth husband – Raphael banishes the demon Asmodeus, and Tobias and Sara presumably live happily ever after.  Some readers have hypothesized that the demon may have had a personal attraction to Sara, but the Catholic Encyclopedia makes the interesting claim that “God allowed the demon to slay these men because they entered marriage with unholy motives,”  and that “the permission given by God to the demon in this history seems to have as a motive to chasten man’s lust and sanctify marriage.”

I will not make any comment regarding the demon’s motivation, but would like to point out that the idea of God giving a demon permission to slay men in order to illustrate a lesson in morality strikes me as somewhat worrisome.  For more on this question, see Does God Make Use of Evil Spirits?

Other Web Pages Of Related Interest: