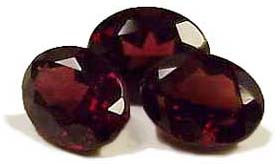 The idea that certain precious stones were associated with certain months goes back at least to the 1st century CE.  Oddly enough, the idea of wearing one’s birthstone – that is, wearing a piece of jewelry containing the gemstone associated with the month one was born in – appears to be much more recent.  George Frederick Kunz, in The Curious Lore of Precious Stones, states that the custom began in Poland during the 18th century.

The wearing of one’s birthstone is traditionally thought to be lucky.  Thus, if one was born in the month of January, and one wears a garnet (one’s “birth stone”), one should attract good fortune.  Sounds simple, doesn’t it?

Things get more complex when we try to determine exactly what the official birthstone is for each month.  There are lists, and then there are lists.

Okay, so that’s the official list of birthstones.  But what if you don’t like your birthstone?  What if you were born in August, but you’re just not a big fan of peridot?

Take heart – there are alternative birthstones for some months, and they all have some historical validity.

January – Almost all sources are consistent in stating that garnet is the birthstone for January.

February – Most sources agree on the amethyst as February’s birthstone, but a few list pearls.

March – Older sources were divided between jasper and bloodstone as the appropriate birthstone.

May – May has a lot of choices for birthstones: emeralds, agates, chalcedony or carnelian.

July – The most common birthstone for July in older sources is the onyx.  Other birthstone candidates include sardonyx, carnelian, ruby and turquoise.

August – Besides peridot, someone born in August could choose carnelian, sardonyx, moonstone, topaz or alexandrite as his or her birthstone.

September – Birthstones could be chrysolite or sardonyx as well as sapphire.

October – Although opal is the traditional birthstone for October, alternatives include tourmaline, beryl and aquamarine.

November – Most older sources agree on topaz, but at least one gives pearl as an alternative birthstone.

December – In past times, December’s birthstone was most commonly listed as ruby.  Turquoise and bloodstone were other choices.  Lapis lazuli is also cited.