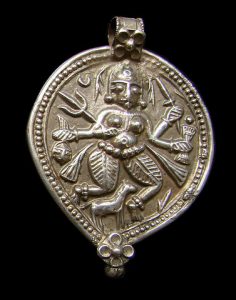 Amulets are described as “anything worn about the person as a charm or preventive against evil, mischief, disease, witchcraft,” etc. In Smith’s Dictionary of Antiquities we find it said that the word signified something suspended, and that it was used for objects such as a stone, plant, artificial production, or piece of writing, which was suspended from the neck, or tied to any part of the body–seemingly ignoring the many other uses of amulets both ancient and modern. Even in Pliny’s time amulets were not merely worn, but were used as ornaments or objects having special purposes, fixed or otherwise, as they are to this day, about the houses, carriages, and fields of widely diverse races. The word amulet is nowadays very commonly used as synonymous with talisman, whereas in meaning it is entirely distinct. The latter means a “sigil engraved in stone or metal,” and it served a double purpose, namely, “to procure love, and to avert mischief from its possessor,” while an amuletum, derived from amolior to do away with, or to baffle, had for its sole end the protection of the owner.

Pisistratus too is recorded by Hesychius to have set up, in the Acropolis at Athens, the figure of a grasshopper (cricket) or grillo, as a charm or amulet to avert the evil eye from the citizens. This insect is constantly found engraved on gems with a similar intention.  The grillo or locust is said to have been adopted as an amulet from its likeness to a skeleton, which is still the emblem of Chronos or Saturn, and a powerful charm against the evil eye.

The Maltese, who are full of beliefs about the evil eye, have set an amulet upon the base of a statue in front of the Church of Crendi near Valetta, which the writer sketched on the spot – a crescent with a serpent coiled about it. Abundant evidence will be produced later on to show that amulets were used also as household ornaments, much as we now use vases and other  knick-knacks upon our chimney-pieces and tables. It is very probable that the teraphim, translated images in our Authorised Version, which Rachel stole from Laban, were really amulets of the kind not to be worn, but used as protecting objects; these, like the Lares and Penates of subsequent times, were looked upon almost as objects of worship, though not as actual gods. Indeed we can have no reason to believe Laban idolatrous, or that Rachel carried them off with the intention of worshipping them. Still it is evident they were highly prized.

We are told that “the ear-rings” mentioned in Gen. xxxv. 4 and Hosea ii. 13 were really amulets, and were connected with idolatrous worship. Amulets, however, were mostly worn round the neck, or rather suspended from a necklace and forming its centerpiece. We find this custom coming down to us here in England, through the classic and Middle Ages to our own times, though just now out of fashion, in the various lockets containing hair, etc., with other articles of a like kind forming the central ornament of necklaces. In some countries these things are still worn, not as mere ornaments, but avowedly as protective amulets against dread fascination. By no means were all hung round the neck, for the phylacteries which were worn as the “frontlets between thine eyes” were true amulets. One kind of phylactery was bound upon the bend of the left arm, and the other on the forehead. They were little leather boxes containing strips of parchment on which were written the four following passages of Scripture, called the Tetragrammaton, namely, Exod. xiii. 2-10 and 11-16; Deut. vi. 4-9 and xi. 13-21. They were certainly worn by all Jews over thirteen years of age in the time of our Lord.

Slips from the Koran, the Scriptures, or other writings, are now worn on the person, or upon horses and camels, by Arabs, Turks, Abyssinians, Greeks, Italians, and even English. They are all avowedly worn for the purpose of averting the evil eye; and seeing that the dread of it was perhaps even greater in old days than now, it seems but reasonable to assume that the direct object of the biblical phylactery was then, as it is today, to baffle the malignant glance.

It is curious that Turks, and, indeed, all Arabs, once used animals and figures of men, representing various deities, as amulets against fascination, but since their conversion from heathenism they have discarded most of these, and now wear sentences from the Koran, avowedly to guard them against the evil eye. Little silver cases to contain them, are regular articles of sale in all Eastern bazaars.

It was said by Plutarch that when Isis brought into the world Harpocrates, the posthumous son of Osiris, she wore an amulet round her neck, in the shape of a vase, the “emblem of Ma,” the goddess of truth. The vase was also a symbol of Osiris. This vase represented water; hence the vivifying power of nature, i.e. Osiris the personification of the Nile which was thus typified by a vase.

Among the ancient Egyptians not only were protecting amulets worn by the living, but in that land where the belief in a future life seemed to absorb so much of the care and interest of the present, they placed them in profusion on their dead, in order that they might be protected from evil spirits and the blighting eye, during the dark passage from this world to the next.

Maspero says these amulets (speaking of scarabs) were “symboles de durée présente ou future,” placed, ailes déployées, upon the breast of the dead along with a written prayer, that the heart whose form the beetle was made to represent, would never bear witness against the dead in the day of judgment. The commonest of all Egyptian amulets, except the scarab, was that known to English people as the Eye of Osiris: “L’œil mystique, l’ouza lie au poignet ou au bras par une cordelette, protégeait contre le mauvais œil, contre les paroles d’envie ou de colore, contre la morsure des serpents.”  These scarabs and mystic eyes were worn equally by the living and the dead “as amulets against evil magic.”