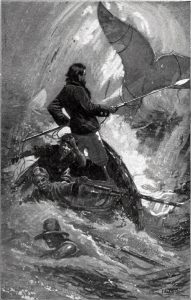 The following is a work on American Literature from an encyclopedia published in 1911.  Please bear in mind that it has not been edited for either factual or political correctness, and is presented here as a document reflective of the time in which it was written.]

The earliest books which are commonly described as the beginnings of American literature were written by men born and bred in England; they were published there; they were, in fact, an undivided part of English literature, belonging to the province of exploration and geographical description and entirely similar in matter and style to other works of voyagers and colonizers that illustrate the expansion of England.  They contain the materials of history in a form of good Elizabethan narrative, always vigorous in language, often vivid and picturesque.  John Smith (1579-1631) wrote the first of these, A True Relation of such Occurrences and Accidents of Note as hath happened in Virginia (1608), and he later added other accounts of the country to the north.  William Strachey, a Virginian official of whom little is known biographically, described (1610) the shipwreck of Sir Thomas Gates on the Bermudas, which is believed to have yielded Shakespeare suggestions for The Tempest.  Colonel Henry Norwood (d. 1689), hitherto unidentified, of Leckhampton, Gloucestershire, a person eminent for loyalty in the reign of Charles I. and distinguished in the civil wars, later governor of Tangiers and a member of parliament for Gloucester, wrote an account of his voyage to Virginia as an adventurer, in 1649.  These are characteristic works of the earliest period, and illustrate variously the literature of exploration which exists in numerous examples and is preserved for historical reasons.  The settlement of the colonies was, in general, attended by such narratives of adventure or by accounts of the state of the country or by documentary record of events.  Thus George Alsop (b. 1638) wrote the Character of the Province of Maryland (1666), and Daniel Denton a Brief Description of New York (1670), and in Virginia the progress of affairs was dealt with by William Stith (1689-1755), Robert Beverly (f. 1700), and William Byrd (1674-1744).  Each settlement in turn, as it came into prominence or provoked curiosity, found its geographer and annalist, and here and there sporadic pens essayed some practical topic.  The product, however, is now an indistinguishable mass, and titles and authors alike are found only in antiquarian lore.  The distribution of literary activity was very uneven along the sea-board; it was naturally greatest in the more thriving and important colonies, and bore some relation to their commercial prosperity and political activity and to the closeness of the connection with the home culture of England.  From the beginning New England, owing to the character of its people and its ecclesiastical rule, was the chief seat of the early literature, and held a position apart from the other colonies as a community characterized by an intellectual life.  There the first printing press was set up, the first college founded, and an abundant literature was produced.

The characteristic fact in the Puritan colonies is that literature there was in the hands of its leading citizens and was a chief concern in their minds.  There were books of exploration and description as in the other colonies, such as William Wood’s (d. 1639) New England’s Prospect (1634), and John Josselin’s New England’s Rarities (1672), and tales of adventure in the wilderness and on the sea, most commonly described as “remarkable providences,” in the vigorous Elizabethan narrative; but besides all this the magistracy and the clergy normally set themselves to the labor of history, controversy and counsel, and especially to the care of religion.  The governors, beginning with William Bradford (1590-1657) of Plymouth, and John Winthrop (1588-1649) of Massachusetts Bay, wrote the annals of their times, and the line of historians was continued by Winslow, Nathaniel Morton, Prince, Hubbard and Hutchinson.  The clergy, headed by John Cotton (1585-1652), Thomas Hooker (1586-1647), Nathaniel Ward (1579- 1652), Roger Williams (1600-1683), Richard Mather (1596-1669), John Eliot (1604-1690), produced sermons, platforms, catechisms, theological dissertations, tracts of all sorts, and their line also was continued by Shepard, Norton, Wise, the later Mathers and scores of other ministers.

The older clergy were not inferior in power or learning to the leaders of their own communion in England, and they commanded the same prose that characterizes the Puritan tracts of the mother country; nor did the kind of writing deteriorate in their successors.  This body of divines in successive generations gave to early New England literature its overwhelming ecclesiastical character; it was in the main a church literature, and its secular books also were controlled and colored by the Puritan spirit.  The pervasiveness of religion is well illustrated by the three books which formed through the entire colonial period the most popular domestic reading of the Puritan home.  These were The Bay Psalm Book (1640), which was the first book published in America; Michael Wigglesworth’s (1631-1705) Day of Doom (1662), a doggerel poem; and the New England Primer (c. 1690), called “the Little Bible.” The sole voice heard in opposition was Thomas Morton’s satirical New English Canaan (1637), whose author was sent out of the colony for the scandal of Merrymount, but satire itself remained religious in Ward’s Simple Cobbler of Agawam (1647).  Poetry was represented in Anne Bradstreet’s (1612-1672) The Tenth Muse lately sprung up in America (1650), and was continued by a succession of doggerel writers, mostly ministers or schoolmasters, Noyes, Oakes, Folger, Tompson, Byles and others.  The world of books also included a good proportion of Indian war narratives and treatises relating to the aborigines.  The close of the 17th century shows literature, however, still unchanged in its main position as the special concern of the leaders of the state.  It is Chief-Justice Samuel Sewall’s (1652-1730) Diary (which remained in manuscript until 1878) that affords the most intimate view of the culture and habits of the community; and he was known to his contemporaries by several publications, one of which, The Selling of Joseph (1700), was the first American anti-slavery tract.

Literature and the New Nation