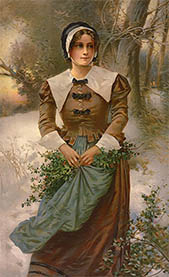 The literature of the first century, exemplified by these few titles, is considerable in bulk, and like colonial literature elsewhere is preserved for historical reasons.  In general, it records the political progress and social conditions of the Puritan state, and the contents of the Puritan mind.  The development of the original settlement took place without any violent check.  Though the colony was continually recruited by fresh immigration, the original 20,000 who arrived before 1640 had established the principles of the state, and their will and ideas remained dominant after the Restoration as before.  It was a theocratic state controlled by the clergy, and yet containing the principle of liberty.  The second and third generations born on the soil, nevertheless, showed some decadence; notwithstanding the effort to provide against intellectual isolation and mental poverty by the foundation of Harvard College, they felt the effects of their situation across the sea and on the borders of a wilderness.  The people were a hardfaring folk and engaged in a material struggle to establish the plantations and develop commerce on the sea; their other life was in religion soberly practiced and intensely felt.  They were a people of one book, in the true sense,--the Bible; it was the organ of their mental life as well as of their spiritual feelings.  For them, it was in the place of the higher literature.  But long resident there in the strip between the sea and the forest, cut off from the world and consigned to hard labor and to spiritual ardors, they developed a fanatical temper; their religious life hardened and darkened; intolerance and superstition grew.

Time, nevertheless, ripened new changes, and the colony was to be brought back from its religious seclusion into the normal paths of modern development.  The sign was contained, perhaps, most clearly in the change effected in the new charter granted by King William which made property the basis of the franchise in place of church-membership, and thus set the state upon an economic instead of a religious foundation.  It is rather by men than by books that these times are remembered, but it is by the men who were writers of books.  In general, the career of the three Mathers coincides with the history of the older Puritanism, and their personal characteristics reflect its stages as their writings contain its successive traits.  Richard Mather, the emigrant, had been joint author in the composition of The Bay Psalm Book, and served the colony among the first of its leaders.  It was in his son, Increase Mather (1639-1723), that the theocracy, properly speaking, culminated.  He was not only a divine, president of Harvard College and a prolific writer; but he was dominant in the state, the chief man of affairs.  It was he who, sent to represent the colony in England, received from King William the new charter.

His son, Cotton Mather (1663-1728), succeeded to his father’s distinction; but the changed condition is reflected in his non-participation in affairs; he was a man of the study and led there a narrower life than his father’s had been.  He was, nevertheless, the most broadly characteristic figure of the Puritan of his time.  He was able and learned, abnormally laborious, leaving over 400 titles attributed to him; and at the same time he was an ascetic and visionary.  The work by which he is best remembered, the Magnalia Christi Americana, or the Ecclesiastical History of New England from its First Planting in the Year 1620, unto the Year of our Lord 1698 (1702), is the chief historical monument of the period, and the most considerable literary work done in America up to that time.  It is encyclopedic in scope, and contains an immense accumulation of materials relating to life and events in the colony.  There the New England of the 17th century is displayed.  His numerous other works still further amplify the period, and taken all together his writings best illustrate the contents of Puritanism in New England.  The power of the clergy was waning, but even in the political sphere it was far from extinction, and it continued under its scheme of church government to guard jealously the principles of liberty.  In John Wise’s (1652-1725) Vindication of the Government of New England Churches (1717) a precursor of the Revolution is felt.  It was in another sphere, however, that Puritanism in New England was to reach its height, intellectually and spiritually alike, in the brilliant personality of Jonathan Edwards (1703-1758), its last great product.  He was free of affairs, and bred essentially the private life of a thinker.  He displayed in youth extraordinary precocity and varied intellectual curiosity, and showed at the same early time a temperament of spiritual sensitiveness and religious ideality which suggests the youth of a poet rather than of a logician.  It was not without a struggle that he embraced sincerely the Calvinistic scheme of divine rule, but he was able to reconcile the doctrine in its most fearful forms with the serenity and warmth of his own spirit; for his soul at all times seems as lucid as his mind, and his affections were singularly tender and refined.  He served as minister to the church at Northampton; and, driven from that post, he was for eight years a missionary to the Indians at Stockbridge; finally he was made president of Princeton College, where after a few weeks’ incumbency he died.

The works upon which his fame is founded are Treatise concerning the Religious Affections (1746), On the Freedom of the Will (1754), Treatise on Original Sin (1758).  They exhibit extraordinary reasoning powers and place him among the most eminent theologians.  He contributed by his preaching great inspiring force to the revival, known as “the Great Awakening,” which swept over the dry and formal Puritanism of the age and was its last great flame.  In him New England idealism had come to the birth.  He illustrates, better than all others, the power of Puritanism as a spiritual force; and in him only did that power reach intellectual expression in a memorable way for the larger world.

The ecclesiastical literature of Puritanism, abundant as it was, produced no other work of power; nor did the Puritan patronage of literature prove fruitful in other fields.  If Puritanism was thus infertile, it nevertheless prepared the soil.  It impressed upon New England the stamp of the mind; the entire community was by its means intellectually as well as morally bred; and to its training and the predisposition it established in the genius of the people may be ascribed the respect for the book which has always characterized that section, the serious temper and elevation of its later literature and the spiritual quality of the imagination which is so marked a quality of its authors.