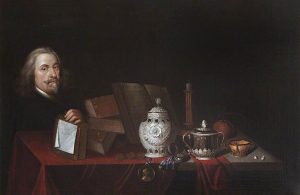 The attitude of the average decent person towards the classics of his own tongue is one of distrust—I had almost said, of fear. I will not take the case of Shakespeare, for Shakespeare is “taught” in schools; that is to say, the Board of Education and all authorities pedagogic bind themselves together in a determined effort to make every boy in the land a lifelong enemy of Shakespeare. (It is a mercy they don’t “teach” Blake.) I will take, for an example, Sir Thomas Browne, as to whom the average person has no offensive juvenile memories. He is bound to have read somewhere that the style of Sir Thomas Browne is unsurpassed by anything in English literature. One day he sees the Religio Medici in a shop-window (or, rather, outside a shop-window, for he would hesitate about entering a bookshop), and he buys it, by way of a mild experiment. He does not expect to be enchanted by it; a profound instinct tells him that Sir Thomas Browne is “not in his line”; and in the result he is even less enchanted than he expected to be. He reads the introduction, and he glances at the first page or two of the work. He sees nothing but words. The work makes no appeal to him whatever. He is surrounded by trees, and cannot perceive the forest. He puts the book away. If Sir Thomas Browne is mentioned, he will say, “Yes, very fine!” with a feeling of pride that he has at any rate bought and inspected Sir Thomas Browne. Deep in his heart is a suspicion that people who get enthusiastic about Sir Thomas Browne are vain and conceited poseurs. After a year or so, when he has recovered from the discouragement caused by Sir Thomas Browne, he may, if he is young and hopeful, repeat the experiment with Congreve or Addison. Same sequel! And so on for perhaps a decade, until his commerce with the classics finally expires! That, magazines and newish fiction apart, is the literary history of the average decent person.

And even your case, though you are genuinely preoccupied with thoughts of literature, bears certain disturbing resemblances to the drab case of the average person. You do not approach the classics with gusto—anyhow, not with the same gusto as you would approach a new novel by a modern author who had taken your fancy. You never murmured to yourself, when reading Gibbon’s Decline and Fall in bed: “Well, I really must read one more chapter before I go to sleep!” Speaking generally, the classics do not afford you a pleasure commensurate with their renown. You peruse them with a sense of duty, a sense of doing the right thing, a sense of “improving yourself,” rather than with a sense of gladness. You do not smack your lips; you say: “That is good for me.” You make little plans for reading, and then you invent excuses for breaking the plans. Something new, something which is not a classic, will surely draw you away from a classic. It is all very well for you to pretend to agree with the verdict of the elect that Clarissa Harlowe is one of the greatest novels in the world—a new Kipling, or even a new number of a magazine, will cause you to neglect Clarissa Harlowe, just as though Kipling, etc., could not be kept for a few days without turning sour! So that you have to ordain rules for yourself, as: “I will not read anything else until I have read Richardson, or Gibbon, for an hour each day.” Thus proving that you regard a classic as a pill, the swallowing of which merits jam! And the more modern a classic is, the more it resembles the stuff of the year and the less it resembles the classics of the centuries, the more easy and enticing do you find that classic. Hence you are glad that George Eliot, the Brontes, Thackeray, are considered as classics, because you really do enjoy them. Your sentiments concerning them approach your sentiments concerning a “rattling good story” in a magazine.

I may have exaggerated—or, on the other hand, I may have understated—the unsatisfactory characteristics of your particular case, but it is probable that in the mirror I hold up you recognise the rough outlines of your likeness. You do not care to admit it; but it is so. You are not content with yourself. The desire to be more truly literary persists in you. You feel that there is something wrong in you, but you cannot put your finger on the spot. Further, you feel that you are a bit of a sham. Something within you continually forces you to exhibit for the classics an enthusiasm which you do not sincerely feel. You even try to persuade yourself that you are enjoying a book, when the next moment you drop it in the middle and forget to resume it. You occasionally buy classical works, and do not read them at all; you practically decide that it is enough to possess them, and that the mere possession of them gives you a cachet. The truth is, you are a sham. And your soul is a sea of uneasy remorse.  You reflect: “According to what Matthew Arnold says, I ought to be perfectly mad about Wordsworth’s Prelude. And I am not. Why am I not? Have I got to be learned, to undertake a vast course of study, in order to be perfectly mad about Wordsworth’s Prelude? Or am I born without the faculty of pure taste in literature, despite my vague longings? I do wish I could smack my lips over Wordsworth’s Prelude as I did over that splendid story by H.G. Wells, The Country of the Blind, in the Strand Magazine!”…. Yes, I am convinced that in your dissatisfied, your diviner moments, you address yourself in these terms. I am convinced that I have diagnosed your symptoms.

Now the enterprise of forming one’s literary taste is an agreeable one; if it is not agreeable it cannot succeed. But this does not imply that it is an easy or a brief one. The enterprise of beating Colonel Bogey at golf is an agreeable one, but it means honest and regular work. A fact to be borne in mind always! You are certainly not going to realise your ambition—and so great, so influential an ambition!–by spasmodic and half-hearted effort. You must begin by making up your mind adequately. You must rise to the height of the affair. You must approach a grand undertaking in the grand manner. You ought to mark the day in the calendar as a solemnity. Human nature is weak, and has need of tricky aids, even in the pursuit of happiness.  Time will be necessary to you, and time regularly and sacredly set apart. Many people affirm that they cannot be regular, that regularity numbs them. I think this is true of a very few people, and that in the rest the objection to regularity is merely an attempt to excuse idleness. I am inclined to think that you personally are capable of regularity. And I am sure that if you firmly and constantly devote certain specific hours on certain specific days of the week to this business of forming your literary taste, you will arrive at the goal much sooner. The simple act of resolution will help you. This is the first preliminary.

The second preliminary is to surround yourself with books, to create for yourself a bookish atmosphere. The merely physical side of books is important—more important than it may seem to the inexperienced.  Theoretically (save for works of reference), a student has need for but one book at a time. Theoretically, an amateur of literature might develop his taste by expending sixpence a week, or a penny a day, in one sixpenny edition of a classic after another sixpenny edition of a classic, and he might store his library in a hat-box or a biscuit-tin.  But in practice he would have to be a monster of resolution to succeed in such conditions. The eye must be flattered; the hand must be flattered; the sense of owning must be flattered. Sacrifices must be made for the acquisition of literature. That which has cost a sacrifice is always endeared. A detailed scheme of buying books will come later, in the light of further knowledge. For the present, buy—buy whatever has received the imprimatur of critical authority.  Buy without any immediate reference to what you will read. Buy!  Surround yourself with volumes, as handsome as you can afford. And for reading, all that I will now particularly enjoin is a general and inclusive tasting, in order to attain a sort of familiarity with the look of “literature in all its branches.” A turning over of the pages of a volume of Chambers’s Cyclopaedia of English Literature, the third for preference, may be suggested as an admirable and a diverting exercise. You might mark the authors that flash an appeal to you.