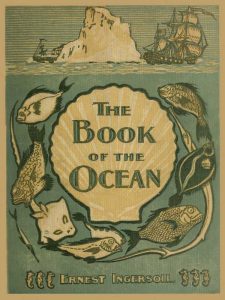 NEXT to Fire we must rank Water in its two forms, liquid and vapour, as the greatest destroyer of books.  Thousands of volumes have been actually drowned at Sea, and no more heard of them than of the Sailors to whose charge they were committed.  D’Israeli narrates that, about the year 1700, Heer Hudde, an opulent burgomaster of Middleburgh, travelled for 30 years disguised as a mandarin, throughout the length and breadth of the Celestial Empire.  Everywhere he collected books, and his extensive literary treasures were at length safely shipped for transmission to Europe, but, to the irreparable loss of his native country, they never reached their destination, the vessel having foundered in a storm.

In 1785 died the famous Maffei Pinelli, whose library was celebrated throughout the world.  It had been collected by the Pinelli family for many generations and comprised an extraordinary number of Greek, Latin, and Italian works, many of them first editions, beautifully illuminated, together with numerous MSS. dating from the 11th to the 16th century.  The whole library was sold by the Executors to Mr. Edwards, bookseller, of Pall Mall, who placed the volumes in three vessels for transport from Venice to London.  Pursued by Corsairs, one of the vessels was captured, but the pirate, disgusted at not finding any treasure, threw all the books into the sea. The other two vessels escaped and delivered their freight safely, and in 1789-90 the books which had been so near destruction were sold at the great room in Conduit Street, for more than £9,000.

These pirates were more excusable than Mohammed II who, upon the capture of Constantinople in the 15th century, after giving up the devoted city to be sacked by his licentious soldiers, ordered the books in all the churches as well as the great library of the Emperor Constantine, containing 120,000 Manuscripts, to be thrown into the sea.

In the shape of rain, water has frequently caused irreparable injury.  Positive wet is fortunately of rare occurrence in a library, but is very destructive when it does come, and, if long continued, the substance of the paper succumbs to the unhealthy influence and rots and rots until all fibre disappears, and the paper is reduced to a white decay which crumbles into powder when handled.

Few old libraries in England are now so thoroughly neglected as they were thirty years ago.  The state of many of our Collegiate and Cathedral libraries was at that time simply appalling.  I could mention many instances, one especially, where a window having been left broken for a long time, the ivy had pushed through and crept over a row of books, each of which was worth hundreds of pounds.  In rainy weather the water was conducted, as by a pipe, along the tops of the books and soaked through the whole.

In another and smaller collection, the rain came straight on to a book-case through a sky-light, saturating continually the top shelf containing Caxtons and other early English books, one of which, although rotten, was sold soon after by permission of the Charity Commissioners for £200.

Germany, too, the very birth-place of Printing, allows similar destruction to go on unchecked, if the following letter, which appeared about a Year ago (1879) in the Academy has any truth in it:–

“For some time past the condition of the library at Wolfenbuttel has been most disgraceful.  The building is in so unsafe a condition that portions of the walls and ceilings have fallen in, and the many treasures in Books and MSS. contained in it are exposed to damp and decay.  An appeal has been issued that this valuable collection may not be allowed to perish for want of funds, and that it may also be now at length removed to Brunswick, since Wolfenbuttel is entirely deserted as an intellectual centre.  No false sentimentality regarding the memory of its former custodians, Leibnitz and Lessing, should hinder this project.  Lessing himself would have been the first to urge that the library and its utility should be considered above all things.”

The collection of books at Wolfenbuttel is simply magnificent, and I cannot but hope the above report was exaggerated.  Were these books to be injured for the want of a small sum spent on the roof, it would be a lasting disgrace to the nation.  There are so many genuine book-lovers in Fatherland that the commission of such a crime would seem incredible, did not bibliographical history teem with similar desecrations.

Water in the form of vapour is a great enemy of books, the damp attacking both outside and inside.  Outside it fosters the growth of a white mould or fungus which vegetates upon the edges of the leaves, upon the sides and in the joints of the binding.  It is easily wiped off, but not without leaving a plain mark, where the mould-spots have been.  Under the microscope a mould-spot is seen to be a miniature forest of lovely trees, covered with a beautiful white foliage, upas trees whose roots are embedded in the leather and destroy its texture.

Inside the book, damp encourages the growth of those ugly brown spots which so often disfigure prints and “livres de luxe.” Especially it attacks books printed in the early part of this century, when paper-makers had just discovered that they could bleach their rags, and perfectly white paper, well pressed after printing, had become the fashion.  This paper from the inefficient means used to neutralise the bleach, carried the seeds of decay in itself, and when exposed to any damp soon became discoloured with brown stains.  Dr. Dibdin’s extravagant bibliographical works are mostly so injured; and although the Doctor’s bibliography is very incorrect, and his spun-out inanities and wearisome affectations often annoy one, yet his books are so beautifully illustrated, and he is so full of personal anecdote and chit chat, that it grieves the heart to see “foxey” stains common in his most superb works.

In a perfectly dry and warm library these spots would probably remain undeveloped, but many endowed as well as private libraries are not in daily use, and are often injured from a false idea that a hard frost and prolonged cold do no injury to a library so long as the weather is dry.  The fact is that books should never be allowed to get really cold, for when a thaw comes and the weather sets in warm, the air, laden with damp, penetrates the inmost recesses, and working its way between the volumes and even between the leaves, deposits upon their cold surface its moisture. The best preventative of this is a warm atmosphere during the frost, sudden heating when the frost has gone being useless.

Our worst enemies are sometimes our real friends, and perhaps the best way of keeping libraries entirely free from damp is to circulate our enemy in the shape of hot water through pipes laid under the floor.  The facilities now offered for heating such pipes from the outside are so great, the expense comparatively so small, and the direct gain in the expulsion of damp so decided, that where it can be accomplished without much trouble it is well worth the doing.

At the same time no system of heating should be allowed to supersede the open grate, which supplies a ventilation to the room as useful to the health of the books as to the health of the occupier.  A coal fire is objectionable on many grounds.  It is dangerous, dirty and dusty.  On the other hand an asbestos fire, where the lumps are judiciously laid, gives all the warmth and ventilation of a common fire without any of its annoyances; and to any one who loves to be independent of servants, and to know that, however deeply he may sleep over his “copy,” his fire will not fail to keep awake, an asbestos stove is invaluable.

It is a mistake also to imagine that keeping the best bound volumes in a glass-doored book-case is a preservative.  The damp air will certainly penetrate, and as the absence of ventilation will assist the formation of mould, the books will be worse off than if they had been placed in open shelves.  If security be desirable, by all means abolish the glass and place ornamental brass wire-work in its stead.  Like the writers of old Cookery Books who stamped special receipts with the testimony of personal experience, I can say “probatum est.”