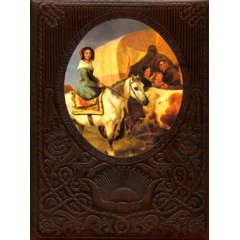 Back in the late 1980’s, I bought a used set of Time-Life Books, called “The Old West.”  There were thirteen volumes and, strange to say, I didn’t give any thought as to whether or not the set was complete.  Time-Life series books can usually stand on their own as individual volumes, which perhaps explains my lack of concern.

Recently I’ve looked at the books with renewed interest.  Having moved from the East Coast to New Mexico, I find remnants of the Old West all around me.  Consequently, the question of completeness became one worth researching.  Turns out my set was not complete –   there are actually twenty-six (!) volumes, plus a staple-bound Master Index – but, being more or less halfway there, completing the series seems a worthwhile goal.  Thus far, I’ve had decent luck finding needed copies on Amazon, buying a couple at a time.

The books themselves are quite nice.  With the exception of the Master Index, they’re bound in brown leather or leatherette (best guess – bonded leather) that’s made to look like it’s tooled, and have pictorial covers.