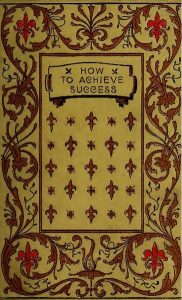 I am frequently amazed at the manner in which grown men and women today use the term “success.”  From overheard conversations, as well as conversations taken part in (at least, as an active listener), one can deduce the following about success:

For a concept so widely written about and discussed, this all seems rather vague.  In the above analysis, one could substitute “enough money” for “success” and come up with the same set of deductions.  Of course, there are those who believe the two terms to be synonymous.

Success cannot be measured in financial terms, and a moment’s thought should be enough to convince anyone of this.  Were there richer men alive in the time of Washington, of Jefferson, of Lincoln?  Of course there were.  Were these wealthier men more “successful” than the great luminaries I have mentioned?  I think not.

My own advice is this: before you start worrying about how to achieve success, spend time defining it.  The man in New York who knows that he wants to get to Sacramento can choose his mode of transportation, estimate costs, calculate how long the trip will be, and so forth.  He is not guaranteed of getting to Sacramento, but that outcome seems fairly likely.  The man who wants to travel to “some other place” usually ends up going nowhere.

Some Thoughts on Success

“The value of a man . . . should be seen in what he gives
and not in what he is able to receive.”
— Albert Einstein

“Success is counted sweetest
by those who ne’er succeed.”
— Emily Dickinson

“Character is the real foundation of all worthwhile success.”
— John Hays Hammond

“What a blessing it would be, if men’s ambition were in every case made to keep pace with their ability.”
— A. K. H. Boyd

“To laugh often and love much. To win and hold the respect of intelligent persons and the affection of little children. To earn the approval of honest critics and to endure without flinching the betrayal of false friends.

To appreciate beauty always, whether in earth’s creations or men and women’s handiwork. To have sought for and found the best in others, and to have given it oneself. To leave the world better than one found it, whether by nurturing a child or a garden patch, writing a cheery letter, or working to redeem some social condition.

To have played with enthusiasm, laughed with exuberance, and sung with exultation; to go down to dust and dreams knowing that the world is a little bit better, and that even a single life breathes easier because we have lived well, that is to have succeeded.”

“Let your soul expand, let your heart reach out to others in loving and generous warmth, and great and lasting will be your joy, and all prosperity will come to you. Those who have wandered from the highway of righteousness guard themselves against competition; those who always pursue the right need not to trouble about such defense.”

— James Allen, The Path to Prosperity

Some Useful Advice for Achieving Success

“You must overcome obstacles singly, and not look upon them en masse,
for you will be discouraged if you do.  Take one thing at a time, dispose
of it, tackle the next thing and so on.  Success comes slowly; it creeps.”
— Col. William C. Hunter

“He that would make sure of success should keep his passions cool,
and his expectations low.”
— Jeremy Collier

“The greatest results in life are usually attained by simple means and
the exercise of ordinary qualities.  These may for the most part be
summed up in these two – common sense and perseverance.”
— Feltham

“If you wish success in life, make perseverance your bosom friend,
experience your wise counselor, caution your elder brother, and
hope your guardian genius.”
— Addison

“Patience is the finest and worthiest part of fortitude, and the
rarest too . . .  Patience lies at the root of all pleasures, as
well as of all powers.”
— John Ruskin

“The surest way not to fail is to determine to succeed.”
— Sheridan

“Rich are the diligent, who can command
Time, nature’s stock! and could his hourglass fall,
Would, as for seed of stars, stoop for the sand,
And, by incessant labour, gather all.”
— D’Avenant

“The greatest results in life are usually attained by simple means,
and the exercise of ordinary qualities.  The common life of every
day, with its cares, necessities, and duties, affords ample
opportunity for acquiring experience of the best kind; and its most
beaten paths provide the true worker with abundant scope for effort
and room for self-improvement.  The road of human welfare lies
along the old highway of steadfast well-doing; and they who are the
most persistent, and work in the truest spirit, will usually be the
most successful.”
— Samuel Smiles

See also, A. K. H. Boyd on Disappointment and Success