Stamps With a History 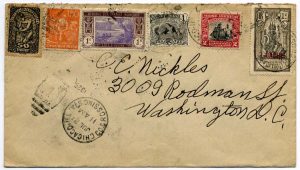 [This is taken from Edward J. Nankivell’s Stamp Collecting As a Pastime, originally published in 1902.]

There are numbers of stamps that have an interesting history of their own. They mark some official experiment, some curious blunder or accident, some little conceit, some historical event, or some crude and early efforts at stamp production.

What is known as the V.R. Penny black, English stamp, is said to have been designed as an experiment in providing a special stamp for official use, its official character being denoted by the initials V.R. in the upper corners; but the proposal was dropped, and the V.R. Penny black was never issued. For a long time it was treasured up as a rarity by collectors, but now that its real claims to be regarded as an issued stamp have been finally settled, it is no longer included in our stamp catalogues. In the days of its popularity it fetched as much as £14 at auction. It is now relegated to the rank of an interesting souvenir of the experimental stage in the introduction of Penny Postage.

Of curious blunders, the Cape of Good Hope errors of colours are amongst the most notable. In 1861 the 1d. and 4d. triangular stamps, then current, were suddenly exhausted, and before a stock could be obtained from the printers in England, a temporary supply had to be provided locally. This was done by engraving imitations of the originals. Stereos were then taken, and made up into plates for printing. By an oversight a stereo of the penny value was dropped into the fourpenny plate and a fourpenny into the penny plate. Consequently, each sheet printed in the required red ink from the penny plate yielded a fourpenny wrongly printed in red instead of blue, its proper colour; and every sheet of the fourpenny likewise yielded a penny stamp printed in blue instead of red. These errors are highly prized by collectors, and are now extremely scarce, even poor specimens fetching from £50 to £60. At the time, copies were sold by dealers for a few shillings each. Similar errors are known in the stamps of other countries.

Now and again the sheets of a particular value have, by some extraordinary oversight, been printed and issued in the wrong colour. In 1869 copies of the 1s. of Western Australia were printed in bistre instead of in green, and a few years later the twopence was discovered in lilac instead of yellow. In 1863 a supply of shilling stamps was sent out to Barbados printed in blue instead of black; but this latter error was, according to Messrs. Hardy and Bacon, so promptly discovered, that it is doubtful if any of the wrong colour were issued for postal use. In 1896 the fastidiously careful firm of De la Rue and Co. printed off and despatched to Tobago a supply of 6,000 one shilling stamps in the colour of the sixpenny, i.e. in orange-brown instead of olive-yellow. Several are said to have been issued to the public before the error had been noticed. Indeed, the firm at home is credited with having first discovered the mistake, and is said to have telegraphed to the colony in time to prevent their issue in any quantity.

Another and much more common error in the early days of stamp production was the careless placing of one stamp on a plate upside down. Stamps so placed are termed tête-bêche. They have to be collected in pairs to show the error. The early stamps of France furnish many examples of this class of error. They are also to be found on the 6d. and 1s. values of the first design of the stamps of the Transvaal, on the early issues of Roumania, on some of the stamps of the Colombian Republic, and other countries.

Stamps requiring two separate printings—i.e. stamps printed in two colours—have given rise to many curious errors in printing. A sheet passed through the press upside down after one colour has been printed results in one portion of the design being inverted. In the 1869 issue of the stamps of the United States no less than three of the values had the central portions of their designs printed upside down. The 4d., blue, of the first issue of Western Australia is known with the Swan on its head. Even the recently issued Pan-American stamps, printed in the most watchful manner by the United States official Bureau of Engraving and Printing, are known with the central portions of the design inverted, and these errors, despite the most searching examination to which each sheet is several times subjected, escaped detection, and were sold to the public. When, however, it is remembered that stamps are now printed by the million, it will be wondered that so few mistakes escape into the hands of collectors.

As a bit of conceit, the issue of what is known as the Connell stamp is probably unequalled. In loyal Canada, in 1860, Mr. Charles Connell was Postmaster-General of the little colony of New Brunswick, which in those days had its own government and its own separate issue of stamps. A change of currency from “pence” to “cents” necessitated new postage stamps. It was decided to give the new issue as much variety as possible by having a separate design for each stamp. Two of the series presented the crowned portrait of the Queen, and one that of the Prince of Wales as a lad in Scotch dress. Connell, apparently ambitious to figure in the royal gallery, gave instructions to the engravers to place his own portrait upon the 5 cents stamp. His instructions were carried out, and in due time a supply of the 5 cents bearing his portrait was delivered. But before many were issued the news spread like wildfire that Connell had outraged the issue by placing his own portrait upon one of the stamps. Political opponents are said to have taken up the hue and cry. The matter was immediately brought before the higher authorities, and the unfortunate stamp was promptly suppressed. Half a million had been printed off and delivered for sale, but very few seem to have escaped the outcry that was raised against them, and to-day copies are extremely scarce. Poor Connell took the matter very much to heart, threw up his appointment, and forthwith retired into private life. But the portrait of the bluff mechanic type of countenance will be handed down from generation to generation in stamp catalogues and costly stamp collections long after the authorities that suppressed him are forgotten.

Some folks question the appearance of the Baden-Powell portrait upon the Mafeking stamps as a similar bit of conceit; but whatever may be said in criticism of Baden-Powell’s stamp, most people will be inclined to accept it as a pleasant souvenir of an historic siege and a determined and gallant stand against great odds.

But of all the portraits that have appeared upon postal issues, none probably occasioned so much trouble and fuss as that of the notorious King Bomba of Sicily. The most eminent engraver of his day—Aloisio—was commissioned to prepare an exact likeness of His Sacred Majesty. After much ministerial tribulation the portrait was approved and engraved, and to this day it is regarded as a superb piece of work. A special cancelling stamp had to be designed and put into use which defaced only the border of the stamp and left the sacred portrait untouched. During the preliminaries necessary to the production of the sacred effigy the fate of ministers and officials hung in the balance. One official was actually marked for degradation for having submitted a disfigurement which turned out to be a carelessly printed, or rough, proof impression.

Numerous stamps have been designed, especially of late years, to represent some historical event in connection with the country of issue. The United States, in 1869, in the confined space of an unusually small stamp, endeavoured to represent the landing of Columbus, and in another stamp the Declaration of Independence. In a much more recent series, stamps of an exceptionally large size were adopted to give scope for a Columbus celebration set of historical paintings, including Columbus soliciting aid of Isabella, Columbus welcomed at Barcelona, Columbus restored to favour, Columbus presenting natives, Columbus announcing his discovery, the recall of Columbus, Isabella pledging her jewels, Columbus in chains, and Columbus describing his third voyage. Greece has given us a set of stamps illustrating the Olympian Games. But collectors look with considerable suspicion upon stamps of this showy class, for too many of them have been produced with the sole object of making a profit out of their sale to collectors, and not to meet any postal requirement.

Crude productions of peculiar interest belong more to the earlier stages of the introduction of postage stamps. Local attempts at engraving in some of our own early colonial settlements were of the crudest possible description, and yet they are, because of their very crudeness, far more interesting than the finished product supplied by firms at home, for the local effort truly represented the country of its issue in the art of stamp production. The amusingly crude attempts which the engravers of Victoria have made from time to time, during the last fifty years, to give us a passable portrait of Her late Majesty Queen Victoria, have no equal for variety. The stamps of the first South African Republic, made in Germany, are very appropriate in their roughness of design and execution. For oddity of appearance the palm must be awarded to those of Asiatic origin, such, for instance, as the stamps of Afghanistan, of Kashmir, and most of the local productions of the Native States of India, marking as they do their own independent attempts to work up to European methods of intercommunication.