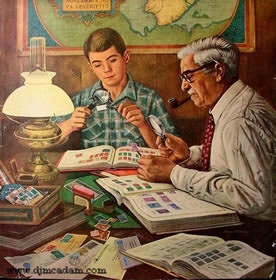 Stamp collecting is a hobby that one can begin successfully at virtually any age, and with any budget.  I personally started collecting stamps at age 5, probably because my brother Frank, four years my senior, was a stamp collector and because I was determined to do whatever he did.  This presented an interesting challenge, in that I had not yet been taught to read, but the situation did not deter me and, in fact, whetted my appetite for education.

Ah, there it is – even in the first paragraph of discussing stamp collecting for children, the dreaded word education creeps in!  Actually, stamp collecting can of course be educational, but that is not my sole (or even primary) reason for recommending it as a suitable hobby for younger persons.

Good reasons for children to collect stamps are as follows: