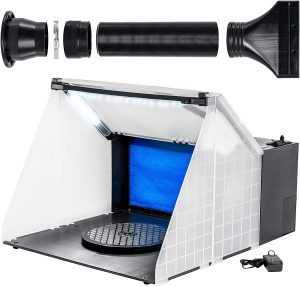 I debated for quite some time – probably longer than I should have – about purchasing a spray booth for use in airbrushing scale models indoors. My original workstation went into the garage when I moved to southern Arizona, and that is where I intended to build my models. Unfortunately, this plan never worked out, for the simple reason that my garage, like most garages, is not air-conditioned. For six months out of the year, trying to work on a scale model in my garage when I got home from work was pretty much impossible because of the high heat. In addition, my current garage door faces the street, so that if I did want to work in the garage with the door open in order to get sufficient ventilation, I was the subject of any curious passer-by and could be easily interrupted.

The solution to all this was to work upstairs in my home office, which would require a spray booth for proper (and safe) ventilation. However, this room also faces the street, and I did not want to detract from the appearance of my house or incur the wrath of my generally pleasant neighbors by running something that looked like a dryer vent out the window. Thus, my requirements:

All of my comparison shopping was done online. The first spray booth that I seriously considered was the Master Airbrush® Brand Portable Hobby Airbrush Spray Booth with LED Lighting, which usually sells on Amazon for somewhere between $90 and $100, making it the least expensive of the bunch. As you can see from the picture above (this is the same booth, but without the LED lights), it has a nice flattened vent which, in the right window, would not be all that visible. The big selling point for the Master spray booth – it’s cheap – is also its downside. The booth is made in China, and is constructed of plastic.

I considered Pace spray booths, made in the USA by Pace Enterprises. They look very sturdy, and are made of 26-gauge galvanized steel. Naturally, they are more expensive, starting at $265 and going up to $495.

I also considered Paasche, but the negative reviews of the small Paasche spray booth dissuaded me from considering that brand.

And, finally, I considered the Artograph 1530 Hobby Model Spray Booth

In the end, I purchased the Master spray booth. Having never had a spray booth, it just seemed too big a jump for me to go spend $400 or $500 on one. My thought was that, if and when I outgrow the Master spray booth, I’ll be in a much better position to make an informed decision about a more expensive one, and will buy either a Pace or an Artograph. So far, I’m happy with that decision. The Master spray booth does meet all the requirements I initially specified. It really does work, which was my main concern. The LED lights work, but did not fit properly (spec tolerances in China apparently are not all that strict), so they’re a bit more held in place than neat-looking.

The main point is this: for about $95, I can now airbrush in the house without bothering anyone, and without exposing myself to harmful particles. (If you’re wondering, I generally spray acrylics, and always wear a 3M Tekk Paint Project Respirator when I’m working.) Not bad!