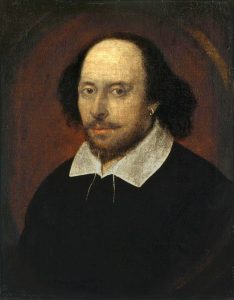 SHAKESPEARE, WILLIAM (1564-1616). —Dramatist and poet, born at Stratford-on-Avon, Warwickshire, on 22nd or 23rd, and baptized on 26th April, 1564. On his father’s side he belonged to a good yeoman stock, though his descent cannot be certainly traced beyond his grandfather, a Richard S., settled at Snitterfield, near Stratford. His father, John Shakespeare, appears to have been a man of intelligence and energy, who set up in Stratford as a dealer in all kinds of agricultural produce, to which he added the trade of a glover. He became prosperous, and gained the respect of his neighbours, as is evidenced by his election in succession to all the municipal honours of his community, including those of chief alderman and high bailiff. He married Mary, youngest daughter of Robert Arden, a wealthy farmer at Wilmcote, and a younger branch of a family of considerable distinction, and whose tenant Richard Shakespeare had been. On her father’s death Mary inherited Asbies, a house with 50 acres of land attached to it. The first children of the marriage were two dau., who d. in infancy. William was the third, and others followed, of whom three sons, Gilbert, Richard, and Edmund, and a daughter Joan, reached maturity. He was ed. with his brother Gilbert at Stratford Grammar School, where he learned Latin from Lilly’s Grammar, English, writing, and arithmetic. He probably read some of the Latin classics and may have got a little Greek, and though his learned friend Ben Jonson credits him with “little Latin and less Greek,” Aubrey says he “knew Latin pretty well.” This happy state of matters continued until he was about 13, when his father fell into misfortune, which appears to have gone on deepening until the success and prosperity of the poet in later years enabled him to reinstate the family in its former position. Meanwhile, however, he was taken from school, and appears to have been made to assist his father in his business.

The next certain fact in his history is his marriage in November, 1582, when he was 18, to Ann Hathaway, daughter of a yeoman at the neighbouring hamlet of Shottery, and 8 years his senior. Various circumstances point to the marriage having been against the wishes of his own family, and pressed on by that of his wife, and that it was so urged in defence of the reputation of the lady, and as perhaps might be expected, they indicate, though not conclusively, that it did not prove altogether happy. The birth, in May, 1583, of his eldest child Susannah (who is said to have inherited something of his wit and practical ability, and who m. a Dr. John Hall), followed in the next year by that of twins, Hamnet and Judith, and the necessity of increased means, led to his departure from Stratford, whence he travelled on foot to London, where the next 23 years of his life were mainly spent. The tradition that his departure was also caused by trouble into which he had got by killing the deer of Sir Thomas Lucy, of Charlcote, is credible. Leaving Stratford in 1585 or the beginning of 1586, he seems at once to have turned to the theatres, where he soon found work, although, as Rowe, his first biographer, says, “in a very mean rank.” It was not long, however, before he had opportunities of showing his capacities as an actor, with the result that he shortly became a member of one of the chief acting companies of the day, which was then under the patronage of the Earl of Leicester, and after being associated with the names of various other noblemen, at last on the accession of James I. became known as the King’s Company. It played originally in “The Theatre” in Shoreditch, the first playhouse to be erected in England, and afterwards in the “Rose” on the Bankside, Southwark, the scene of the earliest successes of S. as an actor and playwright.

Subsequently to 1594, he acted occasionally in a playhouse in Newington Butts, and between 1595 and 1599 in the “Curtain.” In the latter year the “Globe” was built on the Bankside, and 10 years later the “Blackfriars:” and with these two, but especially with the former, the remainder of his professional life was associated. It is not unlikely that he visited various provincial towns; but that he was ever in Scotland or on the Continent is improbable. Among the plays in which he appeared were Jonson’s Every Man in his Humour and Sejanus, and in Hamlet he played “The Ghost;” and it is said that his brother Gilbert as an old man remembered his appearing as “Adam” in As You Like It. By 1595 S. was famous and prosperous; his earlier plays had been written and acted, and his poems Venus and Adonis, and Lucrece, and probably most of the sonnets, had been pub. and received with extraordinary favour. He had also powerful friends and patrons, including the Earl of Southampton, and was known at Court. By the end of the century he is mentioned by Francis Meres as the greatest man of letters of the day, and his name had become so valuable that it was affixed by unscrupulous publishers to works, e.g. Locrine, Oldcastle, and The Yorkshire Tragedy, by other and often very inferior hands. He had also resumed a close connection with Stratford, and was making the restoration of the family position there the object of his ambition. In accordance with this he induced his father to apply for a grant of arms, which was given, and he purchased New Place, the largest house in the village.

With the income derived from his profession as an actor and dramatist, and his share of the profits of the Globe and Blackfriars theatres, and in view of the business capacity with which he managed his affairs, he may be regarded as almost a wealthy man, and he went on adding to his influence in Stratford by buying land. He had enjoyed the favour of Elizabeth, and her death in 1603 did nothing to disturb his fortunes, as he stood quite as well with her successor. His company received the title of the “King’s Servants,” and his plays were frequently performed before the Court. But notwithstanding this, the clouds had gathered over his life. The conspiracy of Essex in 1601 had involved several of his friends and patrons in disaster; he had himself been entangled in the unhappy love affair which is supposed to be referred to in some of his sonnets, and he had suffered unkindness at the hands of a friend. For a few years his dramas breathe the darkness and bitterness of a heart which has been sounding the depths of sad experience. He soon, however, emerged from this and, passing through the period of the great tragedies, reached the serene triumph and peace of his later dramas. In 1611 Shakespeare severed his long connection with the stage, and retired to Stratford, where the remaining five years of his life were spent in honor and prosperity. Early in 1616 his health began to give way, and he made his will. In the spring he received a visit from his friends, Jonson and Drayton, and the festivity with which it was celebrated seems to have brought on a fever, of which he died on April 23. He was survived by his wife and his two daughters, both of whom were married. His descendants died out with his granddaughter, Elizabeth Hall.

Immense research has been spent upon the writings of Shakespeare, with the result of substantial agreement as to the order of their production and the sources from which their subjects were drawn; for S. rarely troubled himself with the construction of a story, but adopting one already existing reared upon it as a foundation one of those marvellous superstructures which make him the greatest painter and interpreter of human character the world has ever seen. His period of literary production extends from about 1588 to 1613, and falls naturally into four divisions, which Prof. Dowden has named, “In the Workshop” ending in 1596; “In the World” 1596-1601; “Out of the Depths” 1601-1608; and “On the Heights” 1608-1613. Of the 37 plays usually attributed to him, 16 only were pub. during his lifetime, so that the exact order in which they were produced cannot always be determined with certainty. Recent authorities are agreed to the extent that while they do not invariably place the individual plays in the same order, they are almost entirely at one as to which belong to the four periods respectively. The following list shows in a condensed form the order according to Mr. Sidney Lee (Dictionary of National Biography) with the most probable dates and the original sources on which the plays are founded.

The evidence as to chronology is three-fold—(1) External, such as entries in registers of Stationers’ Company, contemporary references, or details as to the companies of actors; (2) External and internal combined, such as references in the plays to events or books, etc.; (3) Internal, content and treatment, progressive changes in versification, presence of frequency of rhyme, etc. The genius of S. was so intensely dramatic that it is impossible to say confidently when he speaks in his own character. The sonnets, written probably 1591-94 have, however, been thought to be of a more personal nature, and to contain indications as to his character and history, and much labour and ingenuity have been expended to make them yield their secrets. It is generally agreed that they fall into two sections, the first consisting of sonnets 1 to 126 addressed to a young man, probably Henry Wriothesley, Earl of Southampton, the friend and patron of S., and 9 years his junior; and the second from 127 to 154 addressed or referring to a woman in whose snares the writer had become entangled, and by whom he was betrayed. Some, however, have held that they are allegorical, or partly written on behalf of others, or that the emotion they express is dramatic and not personal.

There are contemporary references to S. which show him to have been generally held in high regard. Thus Ben Jonson says, “I loved the man, and do honour to his memory, on this side idolatry, as much as any,” and Chettle refers to “His demeanour no lesse civil than exelent in the qualities he professes.” The only exception is a reference to him in Greene’s Groat’s-worth of Wit, as “an upstart crow beautified with our feathers, that with his tyger’s heart wrapt in a player’s hide supposes he is as well able to bumbast out a blanke verse as the best of you … and is in his own conceit the only Shake-scene in a countrie.” He is said to have written rapidly and with facility, rarely requiring to alter what he had set down. In addition to his generally received works, others have been attributed to him, some of which have been already mentioned: the only two which appear to have serious claims to consideration are The Two Noble Kinsmen, partly by Fletcher, and Edward III., of which part of Act I. and the whole of Act II. have been thought to be Shakespeare’s. On the other hand a theory has been propounded that none of the plays bearing his name were really his, but that they were written by Bacon. This extraordinary view has been widely supported, chiefly in America, and has been sometimes maintained; with considerable ability and misplaced ingenuity.