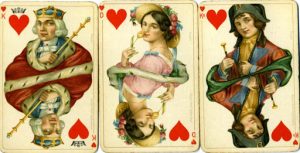 How Much Are These Playing Cards Worth?

Every once in a while – and, when I’m busy, much more frequently than that – a reader sends me an e-mail describing an old deck of playing cards, and asking how much the deck is worth.

Not wishing to embark upon a career as an appraiser of old playing cards, and doubting that anyone would actually want to pay me decent money for such an appraisal, I will instead offer some advice on how you and other would be e-mailers can save time and can determine on your own just how much that old deck is worth.

Factors affecting the value of a deck of playing cards are these: desirability, scarcity, completeness and condition.  Of these, desirability comes first.  Your deck of playing cards could be scarce, complete, and in great condition, but if no one else wants it, it isn’t worth anything.  On the other hand, a desirable deck that is scarce, complete, and in great condition could be worth a great deal.  I recently received an auction catalogue from a German firm which listed a number of such decks (very old, very desirable) with estimated values of one, two, three thousand euros and more.

Your deck probably isn’t worth that; but then, I can’t say.

What you need to do is to identify your deck, determine the desirability of it, and candidly assess the deck’s condition.

Let’s talk about condition for a moment, because you can do that right now.  Is the deck complete, or at least complete as far as you know?  If it is a standard 52-card deck, are there 52 cards?  Are there extra cards, including jokers?  (These extra cards add to a deck’s value.)  Is the deck in the original box?  Do the cards seem to be as good as new, or are they bent, worn, ripped?  Do they reek of mildew?  Do they smell the slightest bit musty?  How about the box?  Does that look new, or is it in tatters?  These issues are important, because if you’re going to try to sell the deck to someone, you need to describe it honestly.

I have bought decks of playing cards on eBay that were described as being in great condition and that were, when I received them, in terrible condition.  Don’t be someone who does that.  If you’re not sure how to describe playing cards, get an auction catalogue of playing cards from a reputable firm, and use that as a guide.

Now, what about identifying the cards themselves?  This is, of course, the part that everyone is interested in.  Resources for doing so are few, but they do exist.  Chief among these resources, if one is speaking of American playing cards, is the  Hochman Encyclopedia of American Playing Cards , edited by Tom and Judy Dawson.  It is a great work, and card collectors owe the Dawsons a tremendous debt for their fine work with this encyclopedia.  To quote from the publisher: “This 332-page volume (plus 24 in color) is based on Gene Hochman’s The Encyclopedia of American Playing Cards which was originally published in six parts between 1976 and 1981. A complete cataloging of American playing card makers as well as details, types, and brands of playing cards from the late 1700s to the early 1930s. 2,700 black and white illustrations, 324 color illustrations.” If you are a collector of playing cards you will, of course, want a copy for yourself.  If not, ask your local library to obtain a copy.

Another book I’d recommend getting your hands on is Catherine Perry Hargrave’s A History of Playing Cards: And a Bibliography of Cards and Gaming.  This is a reprint of an older work, so there’s no up-to-date information in it; but it is a very informative work, and has the added advantage of being remarkably inexpensive.

Armed with these two works, you’ll have a working knowledge of the historical development of playing cards (did you know they used to have square corners?), and a reasonable shot at identifying your deck.

You can, of course, also do internet research.  If your deck says “Dondorf Spiel,” search on Google for Dondorf Spiel.  And do use eBay to see if anything like your deck is currently listed.  (I like eBay; I just don’t like eBay sellers who don’t accurately describe their wares.)

Now for the last step; join (or at least contact) a playing card collector’s group.  There are two in the United States, and two in Great Britain, the most prestigious of all groups being the International Playing-Card Society.

I hope this information is helpful to you.  Finding a rare and truly valuable deck of playing cards doesn’t happen every day, but it does happen; and it would be great if it happened to you!