What is a plate block?

Shown below is a typical plate block of a United States stamp, with one plate number in the corner. The stamp is the 1953 3¢ Washington Territory postage stamp, issued on March 2, 1953. 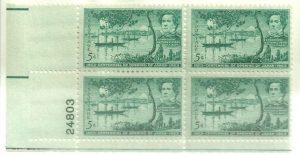 Some older issues did not have the plate number located in the corner of the sheet, as in the example below of the US 1934 16c Airmail Special Delivery postage stamp. Thus, for this issue, six stamps are required in order for the block to be considered a plate block. 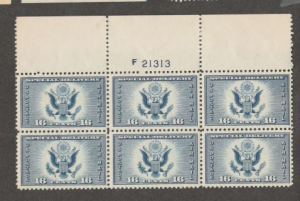 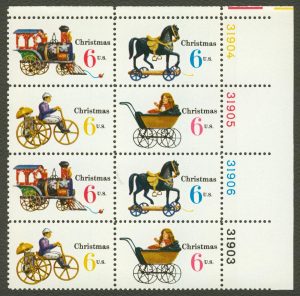 How Much Is a Plate Block Worth?

Naturally, the value of any given plate block is dependent upon its scarcity and desirability, as well as the condition of the plate block itself. Plate blocks are normally collected in mint condition, with a premium paid for mint never hinged (MNH) condition. The standard reference work and price guide for United States plate blocks is the Scott Specialized Catalogue of United States Stamps & Covers.

How Does One Store Plate Blocks?

Specialized plate block stamp albums have been issued in the past, but are rarely seen today. Most collectors opt to store their plate blocks in stockbooks.

Do Countries Other Than the United States Issue Plate Blocks?

While the vast majority of plate block collectors limit themselves to issues of the United States, there are other countries that issue plate blocks. Shown below is a Canada 1983 World Council Churches plate block. 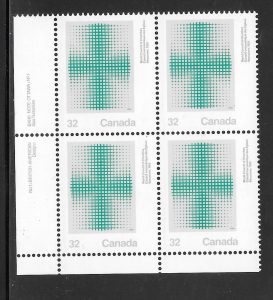 Should One Collect Plate Blocks?

The philatelic question of what to collect is an age-old one, with an age-old answer; one should collect that which appeals to him or her. Having said that, the author of this overview has seen a recent surge of interest in plate blocks, probably due to a number of factors. First, as previously noted, plate blocks are scarcer than single stamps or simple blocks of stamps. Second, by nature of their size – a plate block is always at least four times larger than the single stamp of the same issue – plate blocks hold more visual appeal. Third, in spite of their scarcity, the internet has made collecting plate blocks easier, as they are now offered for sale at a number of online sites, including Amazon. Putting the matter simply, one could certainly do a lot worse than to assemble an interesting collection of mint plate blocks. The idea is certainly worthy of consideration.