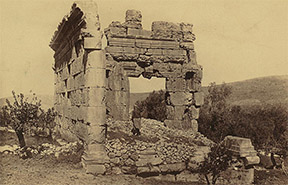 Some of the more intelligent investigators have maintained, with no little confidence, that this ancient American civilization came originally from the Phoenicians. Among those who use reason in their inquiries sufficiently to be incapable of accepting the absurdities of monkish fancy, this hypothesis has found more favor than any other. Wherever inquiry begins by assuming that the original civilizers came from some other part of the world, it seems more reasonable than any other, for more can be said to give it the appearance of probability.

The people known to us as Phoenicians were pre-eminent as the colonizing navigators of antiquity. They were an enlightened and enterprising maritime people, whose commerce traversed every known sea, and extended its operations beyond the “Pillars of Hercules” into the “great exterior ocean.” The early Greeks called them Ethiopians (not meaning either black men or Africans), and said they went every where, establishing their colonies and their commerce in all the coast regions, “from the extreme east to the extreme west.” But the great ages of this people are in the distant past, far beyond the beginning of what we call history. History has knowledge only of a few of their later communities, the Sabeans of Southern Arabia, the Phoenicians (meaning chiefly the Tyrians), and the Carthaginians. What a change there would be in the prevalent conceptions of the past if we could have a complete record of this race from the beginning of its development!

It is not difficult to believe that communities of the Phoenician or Ethiopian race were established all around the Mediterranean, and even beyond the Strait of Gibraltar, in ages quite as old as Egypt or Chaldea, and that they had communication with America before Tyre or Sidon was built. Why did the ancients say so much of a “great Saturnian continent” beyond the Atlantic if nobody in the pre-historic ages had ever seen that continent? It was there, as they said and as we know; but whence came their knowledge of it, and such knowledge as led them to describe it as “larger than Asia (meaning Asia Minor), Europe, and Libya together?” This ancient belief must have been due to Phoenician or Ethiopian communication with America in earlier times, which was imperfectly recollected, or perhaps never completely revealed to other nations; and this must have taken place at a very remote period, for imperfect recollection of the great continent across the Atlantic, including what Solon heard in Egypt of Atlantis, was more ancient than the constrained voyage of that Tyrian ship of which Diodorus Siculus gives an account; and it can be seen that the early Greeks had a better knowledge even of Western Europe than those of later times. A dark age, so far as relates to geographical knowledge, set in upon the countries around the Aegean Sea and on the coast of Asia Minor after the independence and enterprise of Tyre and the other Phoenician cities were destroyed by the Assyrians, toward the close of the ninth century before Christ, which was disturbed some four hundred and fifty or five hundred years later by the conquests of Alexander the Great.

The known enterprise of the Phoenician race, and this ancient knowledge of America, so variously expressed, strongly encourage the hypothesis that the people called Phoenicians came to this continent, established colonies in the region where ruined cities are found, and filled it with civilized life. It is argued that they made voyages on the “great exterior ocean,” and that such navigators must have crossed the Atlantic; and it is added that symbolic devices similar to those of the Phoenicians are found in the American ruins, and that an old tradition of the native Mexicans and Central Americans described the first civilizers as “bearded white men,” who “came from the East in ships.” Therefore, it is urged, the people described in the native books and traditions as “Colhuas” must have been Phoenicians.

But if it were true that the civilization found in Mexico and Central America came from people of the Phoenician race, it would be true also that they built in America as they never built any where else, that they established a language here radically unlike their own, and that they used a style of writing totally different from that which they carried into every other region occupied by their colonies. All the forms of alphabetical writing used at present in Europe and Southwestern Asia came directly or indirectly from that anciently invented by the race to which the Phoenicians belonged, and they have traces of a common relationship which can easily be detected. Now the writing of the inscriptions at Palenque, Copan, and elsewhere in the ruins has no more relatedness to the Phoenician than to the Chinese writing. It has not a single characteristic that can be called Phoenician any more than the language of the inscriptions or the style of architecture with which it is associated; therefore we can not reasonably suppose this American civilization was originated by people of the Phoenician race, whatever may be thought relative to the supposed ancient communication between the two continents and its probable influence on civilized communities already existing here.