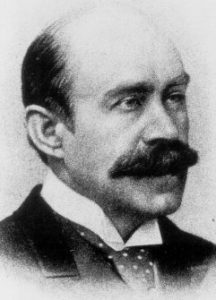 PATER, WALTER HORATIO (1839-1894). —Essayist and critic, son of Richard G. Pater, of American birth and Dutch extraction, a benevolent physician, born at Shadwell, and educated at the King’s School, Canterbury, and at Queen’s Coll., Oxford, after leaving which he made various tours in Germany and Italy where, especially in the latter, his nature, keenly sensitive to every form of beauty, received indelible impressions. In 1864 he was elected a Fellow of Brasenose, and in its ancient and austere precincts found his principal home. As a tutor, though conscientious, he was not eminently successful; nevertheless his lectures, on which he bestowed much pains, had a fit audience, and powerfully influenced a few select souls. He resigned his tutorship in 1880, partly because he found himself not entirely in his element, and partly because literature was becoming the predominant interest in his life. In 1885 he went to London, where he remained for 8 years, continuing, however, to reside at Brasenose during term. The reputation as a writer which he had gained made him welcome in whatever intellectual circles he found himself. Leaving London in 1893 he settled in a house in St. Giles, Oxf. In the spring of 1894 he went to Glasgow to receive the honorary degree of LL.D., a distinction which he valued. In the summer he had an attack of rheumatic fever, followed by pleurisy. From these he had apparently recovered, but he succumbed to an attack of heart-failure which immediately supervened. Thus ended prematurely in its 55th year a life as bare of outward events as it was rich in literary fruit and influence.

Pater is one of the greatest modern masters of style, and one of the subtlest and most penetrating of critics. Though not a philosopher in the technical sense, he deeply pondered the subjects with which philosophy sets itself to deal; but art was the dominating influence in his intellectual life, and it was said of him that “he was a philosopher who had gone to Italy by mistake instead of to Germany.” He may also be called the prophet of the modern æsthetic school. His attitude to Christianity, though deeply sceptical, was not unsympathetic. As a boy he came under the influence of Keble, and at one time thought of taking orders, but his gradual change of view led him to relinquish the idea. Among his works may be mentioned an article on Coleridge, and others on Winckelmann, Leonardo da Vinci, Michelangelo, Botticelli, etc., which were coll. and pub. as Studies in the History of the Renaissance (1873); Appreciations (1889) contained his great essays on Æsthetic Poetry and Style, various Shakespearian studies and papers on Lamb and Sir T. Browne; Imaginary Portraits, and Greek Studies (1894); Plato and Platonism (1893). His masterpiece, however, is Marius the Epicurean (1885), a philosophical romance of the time of Marcus Aurelius. The style of Pater is characterised by a subdued richness, and complicated, but perfect structure of sentences. In character he was gentle, refined, and retiring, with a remarkable suavity of manner and dislike of controversy.