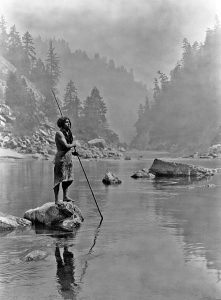 Attitudes in the Past

The attitudes of American society at large have changed drastically toward American Indians during my lifetime, but I have a feeling that most of us who are not American Indians still haven’t gotten it right.

When I was a boy, Indians were the one-dimensional bad guys in cowboy vs. Indian movies.  The plot was as predictable as it was lame: Indians would commit some atrocity on the nice white folks helpfully trying to bring civilization to an untamed land; romantically-portrayed cowboys would go settle the score, making the world safe for cattle-ranching and winning the undying love and admiration of the local schoolmarm in the process.  The few deviations from this story line (such as the Lone Ranger’s Indian sidekick) were notable for straying from the script.

Still, we all wanted to be Indians.  They were cool, knew how to survive in the woods, knew how to tread silently through a forest, dressed in loincloths, lived in tepees and carried tomahawks.  And they played tom-toms.

In the 1960’s and 1970’s attitudes changed.  Indians were the ones who’d gotten short-changed by the Establishment, lied to, used, etc.  Who couldn’t identify with that?  Of course, all these good feelings never really translated, as far as I know, into much in the way of actual benefits to American Indians, but whoever wrote that book about burying his heart at Wounded Knee sure made a bundle.  Actually, whoever made those two silly movies about Billy Jack must have made a bundle, too.

But I think the most important thing we can do as individuals in our society is to ensure that American Indians themselves are welcomed within our society – not subsumed, not incorporated, not amalgamated, but welcomed.  Poverty, hunger, joblessness and higher-than-average suicide rates are still problems that American Indians cope with regularly.  So are those offensive mascots for teams with names like “Redskins.”  If you’re truly interested in American Indian culture and values, don’t let your interest stop with a few books and posters – make it your business to understand American Indian issues and rights, and make your voice heard on these issues.

What Should “American Indians” Be Called?

Here’s some background to this question.  The webpage you’re reading has been online since the late 1990’s, with only a few minor changes, such as updating links.  And from that time until May, 2009, I used the term “Native American” on this page, and advocated the use of that term as being the most correct one.  My intentions were good – but I’ve recently learned that there’s a certain road paved with good intentions . . .

Then I received a remarkable e-mail about this issue, which I found to be eye-opening.  The author was kind enough to give his permission to reproduce his words here, as follows:

You don’t know me and you have no reason to give me any of your time, but based on what I’ve read I may have information you’ll probably want. Please read the rest of this email with an open mind. Regardless of what you claim to be (I honestly don’t know), you present yourself as a scholar who’s interested in historical accuracy. I’m impressed by everything I’ve read so far, so I thought you’d be interested in the following information.

First, I’ll address the facts. You have a page dedicated to what you call “Native Americans” where you state that white men ‘still haven’t gotten it right.’ Second, I’m one of the people you’re referring to on that page. I’m not here to lodge a grievance or file a complaint, but simply to educate someone who appears open to the truth and to confirm that you still haven’t gotten it right.

Rather than list my credentials, I’ll simply introduce myself. My legal name is Michael Lewis Taylor, but I’m also known as Kawhosta Yucwy (Strong Bear), Senior Warrior of the Bear Clan of the Seneca Nation, Keepers of the Western Door of the Iroquois League. I think it’s also important to mention that I’m also a proud veteran of the United States Air Force from the Operation Desert Storm era and hold no animosity toward the United States, so I’m not saying this as some sort of revenge or retaliation. Enough said about my lineage or reasoning, now to address my concern, which may seem minor to most, but major to those who care. With your attention to detail, you may find this extremely interesting.

While the term ‘Native American’ is technically correct, it’s also an almost insulting term. I say ‘almost insulting’ because I think the root of its use is largely unintentional and due to misinformation and a lack of education caused by the public and private school systems of many countries, including the United States. It also doesn’t help that there are so few of us that know the truth, have internet access, and are able to spread the word. Although “Native American” is technically correct, which is why the American government gets away with it, the proper term is “American Indian.” I know this term causes immediate reactions of ‘political correctness’ but please hear me through. Native Americans include not only the North American tribes, but also the indigenous people of the American Samoas, the Micronesians, the original Hawaiians, the Inuits, the Aleuts, and the erroneously termed Eskimos, who are actually Upiks and Inupiats. Calling an American Indian a Native American is the equivalent of calling someone from Russia an Asian. While it’s technically correct, it’s inaccurate, immensely misleading, and somewhat insulting.

In case you have any further reservations, you should also know that despite what most school teachers and textbooks may say and probably believe, the term ‘Indian’ is not related in any way to India and was not a result of a lost white man. Please allow me to explain. Christopher Columbus was an accomplished professional sailor and navigator and was educated and skilled enough to convince the monarchy of a nation to finance his journey. He knew that the land he reached was not India, the country he originally planned to reach, and was expecting clear ocean. He was not expecting land for some time. He did not expect an entire continent to be in the way and did not believe he was in India.

Despite popular belief, most people of Christopher Columbus’ time were well aware of the planet’s true shape. In fact, the circumference of the Earth was first calculated by the Greek mathematician, Euclid, in the fourth century BC, almost 2000 years before Columbus’ time.

The country Columbus was expecting to reach was not called India at the time. It’s true name is Bharat and was known to Europeans as Hindustan until the works of Orosius were translated by King Alfred in the 17th century, which is when India first got its modern name. That was more than 200 years after Columbus first began calling the indigenous tribes of North America “En Dio,” which means “In With God” in Spanish. Over time, this term became “Indian” in English. That was long before India got its current name.

There’s also a legal view on the issue. At an international conference of Indians from the Americas, held in Geneva, Switzerland at the United Nations in 1977, we unanimously decided we would go under the term American Indian. If you needed no other reason to change your terminology, this should convince you. This information can be confirmed by Russell Means himself, an American Indian who appears in many movies and once ran for President of the United States.

There isn’t much need for me to add anything to Mr. Taylor’s letter, except to say here what I said to him in our correspondence, which is that Russell Means is right. It isn’t for governments to tell people what they should be called. And the international conference held in 1977 really does – or should – settle the matter.

I also said to Mr. Taylor, and would like to say to all, the following:

If I were an American Indian, and a white person wanted to involve himself in issues related to American Indians, my first thought would be to say, “Thanks, but you’ve already done quite enough.” Entirely understandable, but here’s the problem from my perspective – even though the terrible things American Indians have suffered in the past and are sometimes forced to endure in the present are inexcusable, there are persons who are not American Indians who realize that this is wrong and who want to see change. The motivation for this desire for change is not necessarily guilt, or charitableness. Our losses are as nothing compared to yours. But are not all Americans cheated by the poor education we receive in “American History,” when the true history, accomplishments, and teachings of American Indians are omitted or distorted? Could we not have learned – could we not still learn – many valuable things from people of the American Indian nations, including proper stewardship of the land we share? The list could go on.

I’m certainly not advocating assimilation, and I’m not saying, “Forget about the past – now you can trust us.” What I am saying is that there can be some mutual benefit in attempting to interest and educate those who are not American Indians about issues related to American Indians.

O Great Spirit whose voice I hear in the winds, hear me. I come before you one of your many children, I am small and weak, I need your strength and wisdom. Let me walk in beauty and let my eyes ever behold the red and purple sunset. Make my hands respect the things you have made, and my ears sharp to hear your voice. Make me wise so that I may understand the things you have taught my people, the lesson you have hidden in every leaf and rock. I seek strength not to be greater than my brother but to fight my greatest enemy, myself. Make me ever ready to come to you with clean hands and straight eyes so that when life fades as a fading sunset my spirit may come to you without shame.

I am, like many people, interested in a variety of spiritual topics.  I’m often surprised that “fellow seekers” in America overlook the fascinating spiritual heritage of American Indians in their quest to find something more “exotic.”  Before planning that next trip to Tibet, consider investigating (in a polite, sensitive, respectful, and unobtrusive manner) American Indian beliefs here on the North American continent.  You may be amazed at what you find. If you’re wondering where to start, why not visit the National Museum of the American Indian?