On the Odors Which My Books Exhale 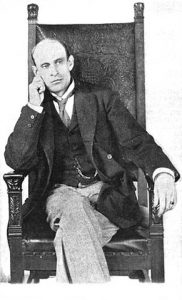 [This is taken from Eugene Field’s The Love Affairs of a Bibliomaniac.]

Have you ever come out of the thick, smoky atmosphere of the town into the fragrant, gracious atmosphere of a library?  If you have, you know how grateful the change is, and you will agree with me when I say that nothing else is so quieting to the nerves, so conducive to physical health, and so quick to restore a lively flow of the spirits.

Lafcadio Hearn once wrote a treatise upon perfumes, an ingenious and scholarly performance; he limited the edition to fifty copies and published it privately—so the book is rarely met with.  Curiously enough, however, this author had nothing to say in the book about the smells of books, which I regard as a most unpardonable error, unless, properly estimating the subject to be worthy of a separate treatise, he has postponed its consideration and treatment to a time when he can devote the requisite study and care to it.

We have it upon the authority of William Blades that books breathe; however, the testimony of experts is not needed upon this point, for if anybody be skeptical, all he has to do to convince himself is to open a door of a bookcase at any time and his olfactories will be greeted by an outrush of odors that will prove to him beyond all doubt that books do actually consume air and exhale perfumes.

Visitors to the British Museum complain not infrequently that they are overcome by the closeness of the atmosphere in that place, and what is known as the British Museum headache has come to be recognized by the medical profession in London as a specific ailment due to the absence of oxygen in the atmosphere, which condition is caused by the multitude of books, each one of which, by that breathing process peculiar to books, consumes several thousand cubic feet of air every twenty-four hours.

Professor Huxley wondered for a long time why the atmosphere of the British Museum should be poisonous while other libraries were free from the poison; a series of experiments convinced him that the presence of poison in the atmosphere was due to the number of profane books in the Museum.  He recommended that these poison-engendering volumes be treated once every six months with a bath of cedria, which, as I understand, is a solution of the juices of the cedar tree; this, he said, would purge the mischievous volumes temporarily of their evil propensities and abilities.

I do not know whether this remedy is effective, but I remember to have read in Pliny that cedria was used by the ancients to render their manuscripts imperishable.  When Cneius Terentius went digging in his estate in the Janiculum he came upon a coffer which contained not only the remains of Numa, the old Roman king, but also the manuscripts of the famous laws which Numa compiled.  The king was in some such condition as you might suppose him to be after having been buried several centuries,  but the manuscripts were as fresh as new, and their being so is said to have been due to the fact that before their burial they were rubbed with citrus leaves.

These so-called books of Numa would perhaps have been preserved unto this day but for the fanaticism of the people who exhumed and read them; they were promptly burned by Quintus Petilius, the praetor, because (as Cassius Hemina explains) they treated of philosophical subjects, or because, as Livy testifies, their doctrines were inimical to the religion then existing.

As I have had little to do with profane literature, I know nothing of the habits of such books as Professor Huxley has prescribed an antidote against.  Of such books as I have gathered about me and made my constant companions I can say truthfully that a more delectable-flavored lot it were impossible to find.  As I walk amongst them, touching first this one and then that, and regarding all with glances of affectionate approval, I fancy that I am walking in a splendid garden, full of charming vistas, wherein parterre after parterre of beautiful flowers is  unfolded to my enraptured vision; and surely there never were other odors so delightful as the odors which my books exhale!

My garden aboundeth in pleasant nooks
And fragrance is over it all;
For sweet is the smell of my old, old books
In their places against the wall.

Here is a folio that’s grim with age
And yellow and green with mould;
There’s the breath of the sea on every page
And the hint of a stanch ship’s hold.

And here is a treasure from France la belle
Exhaleth a faint perfume
Of wedded lily and asphodel
In a garden of song abloom.

And this wee little book of Puritan mien
And rude, conspicuous print
Hath the Yankee flavor of wintergreen,
Or, may be, of peppermint.

In Walton the brooks a-babbling tell
Where the cheery daisy grows,
And where in meadow or woodland dwell
The buttercup and the rose.

But best beloved of books, I ween,
Are those which one perceives
Are hallowed by ashes dropped between
The yellow, well-thumbed leaves.

For it’s here a laugh and it’s there a tear,
Till the treasured book is read;
And the ashes betwixt the pages here
Tell us of one long dead.

But the gracious presence reappears
As we read the book again,
And the fragrance of precious, distant years
Filleth the hearts of men.

Come, pluck with me in my garden nooks
The posies that bloom for all;
Oh, sweet is the smell of my old, old books
In their places against the wall!

Better than flowers are they, these books of mine!  For what are the seasons to them?  Neither can the drought of summer nor the asperity of winter wither or change them.  At all times and under all circumstances they are the same—radiant, fragrant, hopeful, helpful!  There is no charm which they do not possess, no beauty that is not theirs.

What wonder is it that from time immemorial humanity has craved the boon of carrying to the grave some book particularly beloved in life?  Even Numa Pompilius provided that his books should share his tomb with him.  Twenty-four of these precious volumes were consigned with him to the grave.  When Gabriel Rossetti’s wife died, the poet cast into her open grave the unfinished volume of his poems, that being the last and most precious tribute he could pay to her cherished memory.

History records instance after instance of the consolation dying men have received from the perusal of books, and many a one has made his end holding in his hands a particularly beloved volume.  The reverence which even unlearned men have for books appeals in these splendid libraries which are erected now and again with funds provided by the wills of the illiterate.  How dreadful must be the last moments of that person who has steadfastly refused to share the companionship and acknowledge the saving grace of books!

Such, indeed, is my regard for these friendships that it is with misery that I contemplate  the probability of separation from them by and by.  I have given my friends to understand that when I am done with earth certain of my books shall be buried with me.  The list of these books will be found in the left-hand upper drawer of the old mahogany secretary in the front spare room.

When I am done,
I’d have no son
Pounce on these treasures like a vulture;
Nay, give them half
My epitaph
And let them share in my sepulture.

Then when the crack
Of doom rolls back
The marble and the earth that hide me,
I’ll smuggle home
Each precious tome
Without a fear a wife shall chide me.

The dread of being separated by death from the objects of one’s love has pursued humanity from the beginning.  The Hindus used to have a selfish fashion of requiring their widows to be entombed alive with their corpses.  The North American Indian insists that his horse, his bow and arrows, his spear, and his other cherished trinkets shall share his grave with him.

My sister, Miss Susan, has provided that after her demise a number of her most prized curios shall be buried with her.  The list, as I recall it, includes a mahogany four-post bedstead, an Empire dresser, a brass warming-pan, a pair of brass andirons, a Louis Quinze table, a Mayflower teapot, a Tomb of Washington platter, a pewter tankard, a pair of her grandmother’s candlesticks, a Paul Revere lantern, a tall Dutch clock, a complete suit of armor purchased in Rome, and a collection of Japanese bric-a-brac presented to Miss Susan by a returned missionary.

I do not see what Miss Susan can possibly do with all this trumpery in the hereafter, but, if I survive her, I shall certainly insist upon a compliance with her wishes, even though it involve the erection of a tumulus as prodigious as the pyramid of Cheops.