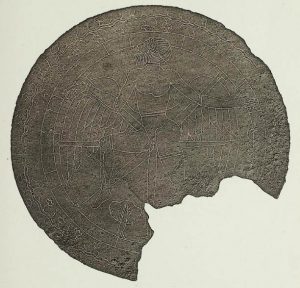 Magic Mirrors – They enabled, it was said, to see the present, the past and the future.  They are of great variety, and of great antiquity.

“Then from his secret Art the Sage Vizier,
A Magic Mirror made; a Mirror like
The bosom of All-wise Intelligence,
Reflecting in its mystic compass all
Within the sevenfold volume of the World
Invol’d; and looking in that Mirror’s face
The Shah beheld the face of his Desire.”

St. Augustine (in De Civitate Dei, Ch. VII, 35) says that they were used by the witches of Thessaly who wrote their oracles on them in human blood.

Varron claims that they are of Persian origin, the Magi having used them for a method of divination called Catoptromancy.  Spartianus says that Didius Julianus used them to know the result of the battle which Tullius Crispinius fought with Septirnus Severus, his rival for the Throne.

The persons who, in Rome, read these mirrors were called Specularii.

In the East these instruments were called Stellar Mirrors.  Pica della Mirandola had faith in them, provided they were made under a favorable constellation, and that they should only be consulted when one felt comfortably warm, for the cold harms the lucidity of their oracle. Reinaud speaks of them in his Description of the Blacas Cabinet. He adds that the operators perfume them, fast for seven days before using them, and recite sacramental prayers at the moment of consulting them. The Chinese and the Hindus made theirs of metal, concave or convex.

Muratori tells us of a Bishop of Verona who was put to death because under his pillow a magic mirror was found bearing on the reverse the word flore which means flower, and proves collaboration with the devil, since, according to St. Cyprian, Satan sometimes appeared in the shape of a flower. A mirror of this kind was also found in the house of Calas de Rienzi. Catherine de Medici had one.

The shape of these mirrors was, as we have said, very varied. Some bore the name of their inventor (Cagliostro, Swedenborg, etc.) More recently they have been used to fix the eye of clairvoyants or mediums so as to put them into a state of hypnosis.

Cahagnet, in his Magnetic Magic, quotes the principal mirrors as follows :-

Walk backward several feet out of doors in moonlight with mirror in your hand, or within doors with candle in one hand and mirror in the other, repeating following rhyme, and face of your future companion will appear in glass:

“Round and round, O stars so fair!
Ye travel and search out everywhere;
I pray you, sweet stars, now show to me
This night who my future husband (wife) shall be.”