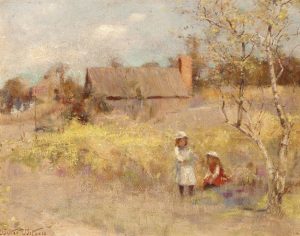 By J. A. MacCulloch

The ritual of the Midsummer festival did not materially differ from that of Beltane, and as folk-survivals show, it was practiced not only by the Celts, but by many other European peoples. It was, in fact, a primitive nature festival such as would readily be observed by all under similar psychic conditions and in like surroundings. A bonfire was again the central rite of this festival, the communal nature of which is seen in the fact that all must contribute materials to it. In local survivals, mayor and priest, representing the earlier local chief and priest, were present, while a service in church preceded the procession to the scene of the bonfire. Dancing sunwise round the fire to the accompaniment of songs which probably took the place of hymns or tunes in honor of the Sun-god, commonly occurred, and by imitating the sun’s action, may have been intended to make it more powerful. The livelier the dance the better would be the harvest. As the fire represented the sun, it possessed the purifying and invigorating powers of the sun; hence leaping through the fire preserved from disease, brought prosperity, or removed barrenness. Hence also cattle were driven through the fire. But if any one stumbled as he leaped, ill-luck was supposed to follow him.  He was devoted to the fadets or spirits, and perhaps, like the “devoted” Beltane victim, he may formerly have been sacrificed. Animal sacrifices are certainly found in many survivals, the victims being often placed in osier baskets and thrown into the fire. In other districts great human effigies of osier were carried in procession and burned.

The connection of such sacrifices with the periodical slaying of a representative of the vegetation-spirit has been maintained by Mannhardt and Dr. Frazer. As has been seen, periodic sacrifices for the fertility of the land are mentioned by Caesar, Strabo, and Diodorus, human victims and animals being enclosed in an osier image and burned. These images survive in the osier effigies just referred to, while they may also be connected with the custom of decking the human representatives of the spirit of vegetation in greenery. The holocausts may be regarded as extensions of the earlier custom of slaying one victim, the incarnation of a vegetation-spirit. This slaying was gradually regarded as sacrificial, but as the beneficial effect of the sacrifice on growth was still believed in, it would naturally be thought that still better effects would be produced if many victims were offered. The victims were burned in a fire representing the sun, and vegetation was thus doubly benefited, by the victims and by the sun-god.

The oldest conception of the vegetation-spirit was that of a tree-spirit which had power over rain, sunshine, and every species of fruitfulness.  For this reason a tree had a prominent place both in the Beltane and Midsummer feasts. It was carried in procession, imparting its benefits to each house or field. Branches of it were attached to each house for the same purpose. It was then burned, or it was set up to procure benefits to vegetation during the year and burned at the next Midsummer festival. The sacred tree was probably an oak, and, as has been seen, the mistletoe rite probably took place on Midsummer eve, as a preliminary to cutting down the sacred tree and in order to secure the life or soul of the tree, which must first be secured before the tree could be cut down. The life of the tree was in the mistletoe, still alive in winter when the tree itself seemed to be dead. Such beliefs as this concerning the detachable soul or life survive in Maerchen, and are still alive among savages.

The bonfire representing the sun, and the victims, like the tree, representing the spirit of vegetation, it is obvious why the fire had healing and fertilizing powers, and why its ashes and the ashes or the flesh of the victims possessed the same powers. Brands from the fire were carried through the fields or villages, as the tree had been, or placed on the fields or in houses, where they were carefully preserved for a year. All this aided growth and prosperity, just as the smoke of the fire, drifting over the fields, produced fertility. Ashes from the fire, and probably the calcined bones or even the flesh of the victims, were scattered on the fields or preserved and mixed with the seed corn.  Again, part of the flesh may have been eaten sacramentally, since, as has been seen, Pliny refers to the belief of the Celts in the eating of human flesh as most wholesome.

In the Stone Age, as with many savages, a circle typified the sun, and as soon as the wheel was invented its rolling motion at once suggested that of the sun. In the Edda the sun is “the beautiful, the shining wheel,” and similar expressions occur in the Vedas. Among the Celts the wheel of the sun was a favorite piece of symbolism, and this is seen in various customs at the Midsummer festival. A burning wheel was rolled down a slope or trundled through the fields, or burning brands were whirled round so as to give the impression of a fiery wheel. The intention was primarily to imitate the course of the sun through the heavens, and so, on the principle of imitative magic, to strengthen it.  But also, as the wheel was rolled through the fields, so it was hoped that the direct beneficial action of the sun upon them would follow.  Similar rites might be performed not only at Midsummer, but at other times, to procure blessing or to ward off evil, e.g. carrying fire round houses or fields or cattle or round a child deiseil or sunwise, and, by a further extension of thought, the blazing wheel, or the remains of the burning brands thrown to the winds, had also the effect of carrying off accumulated evils.

Beltane and Midsummer thus appear as twin halves of a spring or early summer festival, the intention of which was to promote fertility and health. This was done by slaying the spirit of vegetation in his representative—tree, animal, or man. His death quickened the energies of earth and man. The fire also magically assisted the course of the sun. Survival of the ancient rites are or were recently found in all Celtic regions, and have been constantly combated by the Church. But though they were continued, their true meaning was forgotten, and they were mainly performed for luck or out of sheer conservatism. Sometimes a Christian aspect was given to them, e.g. by connecting the fires with St. John, or by associating the rites with the service of the Church, or by the clergy being present at them. But their true nature was still evident as acts of pagan worship and magic which no veneer of Christianity could ever quite conceal.