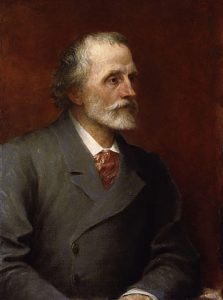 MEREDITH, GEORGE (1828-1909). —Novelist and poet, born at Portsmouth, son of Augustus Meredith, a naval outfitter, who afterwards went to Cape Town, and educated at Portsmouth and Neuwied in Germany. Owing to the neglect of a trustee, what means he had inherited were lost, and he was in his early days very poor. Articled to a lawyer in London, he had no taste for law, which he soon exchanged for journalism, and at 21 he was writing poetry for magazines, his first printed work, a poem on the Battle of Chillianwallah, appearing in Chambers’s Journal. Two years later he pub. Poems (1851), containing Love in the Valley. Meantime he had been ed. a small provincial newspaper, and in 1866 he was war correspondent in Italy for the Morning Post, and he also acted for many years as literary adviser to Chapman and Hall. By this time, however, he had produced several of his novels. The Shaving of Shagpat had appeared in 1856, Farina in 1857, The Ordeal of Richard Feverel in 1859, Evan Harrington in 1861, Emilia in England (also known as Sandra Belloni) in 1864, its sequel, Vittoria, in 1866, and Rhoda Fleming in 1865. In poetry he had produced Modern Love and Poems of the English Roadside (1862), generally regarded as his best poetical work. These were followed by The Adventures of Harry Richmond (1871), Beauchamp’s Career (1875), said to be the author’s favorite, The Egoist (1879), which marks the beginning of a change in style characterised by an even greater fastidiousness in the choice of words, phrases, and condensation of thought than its predecessors, The Tragic Comedians (1880), and Diana of the Crossways, the first of the author’s novels to attain anything approaching general popularity. The same period yielded in poetry, Poems and Lyrics of the Joy of Earth (1883), Ballads and Poems of Tragic Life (1887), and A Reading of Earth (1888). His later novels, One of our Conquerors (1891), Lord Ormont and his Aminta (1894), and The Amazing Marriage (1895), exhibit a tendency to accentuate those qualities of style which denied general popularity to all of M.’s works, and they did little to add to his reputation. The contemporary poems include The Empty Purse and Jump to Glory Jane (1892). In 1905 he received the Order of Merit, and he d. on May 19, 1909. He was twice m., his first wife, who d. 1860, being a dau. of Thomas Love Peacock. This union did not prove in all respects happy. His second wife was Miss Vulliamy, who died 1885. In his earlier life he was vigorous and athletic, and a great walker; latterly he lost all power of locomotion.

Though the writings of Meredith never were and probably never will be generally popular, his genius was, from the very first, recognized by the best judges. All through he wrote for the reader who brought something of mind, thought, and attention, not for him who read merely to be amused without trouble; and it is therefore futile to attribute failure to him because he did not achieve what he did not aim at. Nevertheless, the long delay in receiving even the kind of recognition which he sought was a disappointment to him. Few writers have striven to charge sentences and even words so heavily with meaning, or to attain so great a degree of condensation, with the result that links in the chain of thought are not seldom omitted and left for the careful reader to supply. There is also a tendency to adopt unusual words and forms of expression where plainness and simplicity would have served as well, and these features taken together give reason for the charges of obscurity and affectation so often made. Moreover, the discussion of motive and feeling is often out of proportion to the narrative of the events and circumstances to which they stand related. But to compensate us for these defects he offers humor, often, indeed, whimsical, but keen and sparkling, close observation of and exquisite feeling for nature, a marvelous power of word-painting, the most delicate and penetrating analysis of character, and an invincible optimism which, while not blind to the darker aspects of life, triumphs over the depression which they might induce in a weaker nature. In matters of faith and dogma his standpoint was distinctly negative.