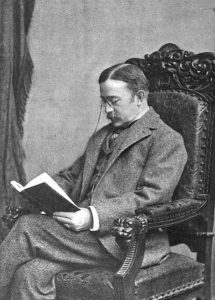 If the writer who ventures to say something more about books and their uses is wise, he will not begin with an apology; for he will know that, despite all that has been said and written on this engrossing theme, the interest of books is inexhaustible, and that there is always a new constituency to read them. So rich is the vitality of the great books of the world that men are never done with them; not only does each new generation read them, but it is compelled to form some judgment of them. In this way Homer, Dante, Shakespeare, Goethe, and their fellow-artists, are always coming into the open court of public opinion, and the estimate in which they are held is valuable chiefly as affording material for a judgment of the generation which forms it. An age which understands and honors creative artists must have a certain breadth of view and energy of spirit; an age which fails to recognize their significance fails to recognize the range and splendor of life, and has, therefore, a certain inferiority.

We cannot get away from the great books of the world, because they preserve and interpret the life of the world; they are inexhaustible, because, being vitally conceived, they need the commentary of that wide experience which we call history to bring out the full meaning of the text; they are our perpetual teachers, because they are the most complete expressions, in that concrete form which we call art, of the thoughts, acts, dispositions, and passions of humanity. There is no getting to the bottom of Shakespeare, for instance, or to the end of his possibilities of enriching and interesting us, because he deals habitually with that primary substance of human life which remains substantially unchanged through all the mutations of racial, national, and personal condition, and which is always, and for all men, the object of supreme interest. Time, which is the relentless enemy of all that is partial and provisional, is the friend of Shakespeare, because it continually brings to the student of his work illustration and confirmation of its truth. There are many things in his plays which are more intelligible and significant to us than they were to the men who heard their musical cadence on the rude Elizabethan stage, because the ripening of experience has given the prophetic thought an historical demonstration; and there are truths in these plays which will be read with clearer eyes by the men of the next century than they are now read by us.

It is this prophetic quality in the books of power which silently moves them forward with the inaudible advance of the successive files in the ranks of the generations, and which makes them contemporary with each generation. For while the medieval frame-work upon which Dante constructed the “Divine Comedy” becomes obsolete, the fundamental thought of the poet about human souls and the identity of the deed and its result not only remains true to experience but has received the most impressive confirmation from subsequent history and from psychology.

It is as impossible, therefore, to get away from the books of power as from the stars; every new generation must make acquaintance with them, because they are as much a part of that order of things which forms the background of human life as nature itself. With every intelligent man or woman the question is not, “Shall I take account of them?” but “How shall I get the most and the best out of them for my enrichment and guidance?”

It is with the hope of assisting some readers and students of books, and especially those who are at the beginning of the ardors, the delights, and the perplexities of the book-lover, that these chapters are undertaken. They assume nothing on the part of the reader but a desire to know the best that has been written; they promise nothing on the part of the writer but a frank and familiar use of experience in a pursuit which makes it possible for the individual life to learn the lessons which universal life has learned, and to piece out its limited personal experience with the experience of humanity. One who loves books, like one who loves a particular bit of a country, is always eager to make others see what he sees; that there have been other lovers of books and views before him does not put him in an apologetic mood. There cannot be too many lovers of the best things in these pessimistic days, when to have the power of loving anything is beginning to be a great and rare gift.

The word love in this connection is significant of a very definite attitude toward books,—an attitude not uncritical, since it is love of the best only, but an attitude which implies more intimacy and receptivity than the purely critical temper makes possible; an attitude, moreover, which expects and invites something more than instruction or entertainment,—both valuable, wholesome, and necessary, and yet neither descriptive of the richest function which the book fulfills to the reader. To love a book is to invite an intimacy with it which opens the way to its heart. One of the wisest of modern readers has said that the most important characteristic of the real critic—the man who penetrates the secret of a work of art—is the ability to admire greatly; and there is but a short step between admiration and love. And as if to emphasize the value of a quality so rare among critics, the same wise reader, who was also the greatest writer of modern times, says also that “where keen perception unites with good will and love, it gets at the heart of man and the world; nay, it may hope to reach the highest goal of all.” To get at the heart of that knowledge, life, and beauty which are stored in books is surely one way of reaching the highest goal.

That goal, in Goethe’s thought, was the complete development of the individual life through thought, feeling, and action,—an aim often misunderstood, but which, seen on all sides, is certainly the very highest disclosed to the human spirit. And the method of attaining this result was the process, also often and widely misunderstood, of culture. This word carries with it the implication of natural, vital growth, but it has been confused with an artificial, mechanical process, supposed to be practiced as a kind of esoteric cult by a small group of people who hold themselves apart from common human experiences and fellowships. Mr. Symonds, concerning whose representative character as a man of culture there is no difference of opinion, said that he had read with some care the newspaper accounts of his “culture,” and that, so far as he could gather, his newspaper critics held the opinion that culture is a kind of knapsack which a man straps on his back, and in which he places a vast amount of information, gathered, more or less at random, in all parts of the world. There was, of course, a touch of humor in Mr. Symonds’s description of the newspaper conception of culture; but it is certainly true that culture has been regarded by a great many people either as a kind of intellectual refinement, so highly specialized as to verge on fastidiousness, or as a large accumulation of miscellaneous information.

Now, the process of culture is an unfolding and enrichment of the human spirit by conforming to the laws of its own growth; and the result is a broad, rich, free human life. Culture is never quantity, it is always quality of knowledge; it is never an extension of ourselves by additions from without, it is always enlargement of ourselves by development from within; it is never something acquired, it is always something possessed; it is never a result of accumulation, it is always a result of growth. That which characterizes the man of culture is not the extent of his information, but the quality of his mind; it is not the mass of things he knows, but the sanity, the ripeness, the soundness of his nature. A man may have great knowledge and remain uncultivated; a man may have comparatively limited knowledge and be genuinely cultivated. There have been famous scholars who have remained crude, unripe, inharmonious in their intellectual life, and there have been men of small scholarship who have found all the fruits of culture. The man of culture is he who has so absorbed what he knows that it is part of himself. His knowledge has not only enriched specific faculties, it has enriched him; his entire nature has come to ripe and sound maturity.

This personal enrichment is the very highest and finest result of intimacy with books; compared with it the instruction, information, refreshment, and entertainment which books afford are of secondary importance. The great service they render us,—the greatest service that can be rendered us—is the enlargement, enrichment, and unfolding of ourselves; they nourish and develop that mysterious personality which lies behind all thought, feeling, and action; that central force within us which feeds the specific activities through which we give out ourselves to the world, and, in giving, find and recover ourselves.