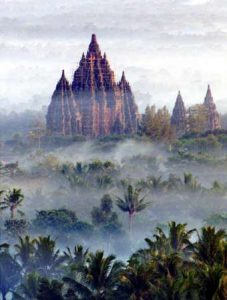 Another hypothesis, much less improbable, though not satisfactory, is that civilization was brought to America in ancient times by the Malays. There was a great island empire of the Malays, whose history extended far back into pre-historic times, how far back can not now be known. It was still in existence when the Portuguese first went to India around the Cape of Good Hope; and we have several accounts of this empire written by travelers who saw and described it six hundred years before this first Indian voyage of the Portuguese was undertaken. El Mas’údí, who was one of these travelers, used very strong terms to describe its extent, intelligence, and power. Speaking of its sovereign, he said, “The islands under his sceptre are so numerous that the fastest sailing vessel is not able to go round them in two years,” implying that his sway was acknowledged by the island world over a large portion of the Pacific. This Malayan empire was maritime and commercial; it had fleets of great ships; and there is evidence that its influence reached most of the Pacific islands. This is shown by the fact that dialects of the Malay language have been found in most of these islands as far in this direction as Easter Island. The language of the Sandwich Islanders, for instance, is Malayan, and has a close relationship to that now spoken in the Malay islands.

The metropolis of this great empire was in the island of Java, where old ruins still bear witness to the former “civilization, wealth, and splendor” celebrated by El Mas’údí. Mr. A. R. Wallace, in his work on the Malay Archipelago, says, “Few Englishmen are aware of the number and beauty of the architectural remains in Java. They have never been popularly illustrated or described, and it will therefore take most persons by surprise to learn that they far surpass those of Central America, perhaps even those of India.” The purpose of his visit to the island did not allow him to explore ruins, but he describes some of them. He saw what still remains of an ancient city called “Modjo-pahit,” and says, “There were two lofty brick masses, apparently the sides of a gateway. The extreme perfection and beauty of the brick-work astonished me. The bricks are exceedingly fine and hard, with sharp angles and true surfaces. They were laid with great exactness, without visible mortar or cement, yet somehow fastened together so that the joints are hardly perceptible, and sometimes the two surfaces coalesce in a most incomprehensible manner. Such admirable brick-work I have never seen before or since. There was no sculpture here, but abundance of bold projections and finely-worked mouldings. Traces of buildings exist for many miles in every direction, and almost every road and pathway shows a foundation of brick-work beneath it, the paved roads of the old city.” In other places he saw sculptures and beautifully carved figures in high relief.

The Malays still read and write, have some literature, and retain many of the arts and usages of civilization, but they are now very far below the condition indicated by these ruins, and described by El Mas’údí, who traveled among them a thousand years ago. It is by no means improbable that their ships visited the western coast of America, and traded with the ancient Mexicans and Peruvians in the days of their greatest power and activity. It is not easy to believe they could fail to do so after taking such control of Easter Island as to leave their language there; and, according to the old traditions of both Mexico and Peru, the Pacific coast in both countries was anciently visited by a foreign people who came in ships. But they did not come to America as civilizers; there is nothing Malayan in either the antiquities or the ancient speech of these countries.

What is known of the former great condition and power of the Malays furnishes important suggestions relative to the ancient history of the islands of Eastern Asia and the Pacific Ocean, as well as those of the Indian Ocean.

The people who inhabit the eastern side of Formosa, it is said, use a Malay dialect, and have no resemblance whatever to the Mongols. Who can fully explain the little known Ainos, who formerly occupied the whole, or nearly the whole of Japan? The unmistakable traces of Malay influence every where in the islands of the Pacific can have but one meaning. The Malays formerly sailed on that ocean, occupied its islands, and doubtless visited America.

That there was communication between Eastern Asia and America in very ancient times, through the Malays or otherwise, is in a high degree probable. This continent was known to the Japanese and Chinese long before the time of Columbus. Accounts of it were recorded in their books previous to his time. They called it “Fusang,” and evidently, at some period, had been accustomed to make voyages to some part of the American coast. But neither the Malays, the Chinese, nor the Japanese came here as civilizers, for there is no trace of either of these peoples in the old ruins, in the ancient language of the country, or in any thing we know of the people whom these American ruins represent.