Magic of the Egyptians and Chaldeans 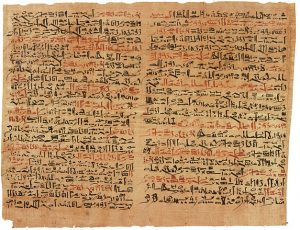 [This is taken from Augustine Calmet’s Phantom World, originally published in 1850.]

All pagan antiquity speaks of magic and magicians, of magical operations, and of superstitious, curious, and diabolical books. Historians, poets, and orators are full of things which relate to this matter: some believe in it, others deny it; some laugh at it, others remain in uncertainty and doubt. Are they bad spirits, or deceitful men, impostors and charlatans, who, by the subtleties of their art, make the ignorant believe that certain natural effects are produced by supernatural causes? That is the point on which men differ. But in general the name of magic and magician is now taken in these days in an odious sense, for an art which produces marvelous effects, that appear above the common course of nature, and that by the operation of the bad spirit.

The author of the celebrated book of Enoch, which had so great a vogue, and has been cited by some ancient writers as inspired Scripture, says that the eleventh of the watchers, or of those angels who were in love with women, was called Pharmacius, or Pharmachus; that he taught men, before the flood, enchantments, spells, magic arts, and remedies against enchantments. St. Clement, of Alexandria, in his recognitions, says that Ham, the son of Noah, received that art from heaven, and taught it to Misraim, his son, the father of the Egyptians.

In the Scripture, the name of Mage or Magus is never used in a good sense as signifying philosophers who studied astronomy, and were versed in divine and supernatural things, except in speaking of the Magi who came to adore Jesus Christ at Bethlehem. Everywhere else the Scriptures condemn and abhor magic and magicians. They severely forbid the Hebrews to consult such persons and things. They speak with abhorrence of Simon and of Elymas, well-known magicians, in the Acts of the Apostles; and of the magicians of Pharaoh, who counterfeited by their illusions the true miracles of Moses. It seems likely that the Israelites had taken the habit in Egypt, where they then were, of consulting such persons, since Moses forbids them in so many different places, and so severely, either to listen to them or to place confidence in their predictions.

The Chevalier Marsham shows very clearly that the school for magic among the Egyptians is the most ancient ever known in the world; that from thence it spread amongst the Chaldeans, the Babylonians, the Greeks and Persians. St. Paul informs us that Jannès and Jambrès, famous magicians of the time of Pharaoh, resisted Moses. Pliny remarks, that anciently, there was no science more renowned, or more in honor, than that of magic: Summam litterarum claritatem gloriamque ex ea scientia antiquitùs et penè semper petitam.

Porphyry says that King Darius, son of Hystaspes, had so high an idea of the art of magic that he caused to be engraved on the mausoleum of his father Hystaspes, “That he had been the chief and the master of the Magi of Persia.“

The embassy that Balak, King of the Moabites, sent to Balaam the son of Beor, who dwelt in the mountains of the East, towards Persia and Chaldea, to entreat him to come and curse and devote to death the Israelites who threatened to invade his country, shows the antiquity of magic, and of the magical superstitions of that country. For will it be said that these maledictions and inflictions were the effect of the inspiration of the good Spirit, or the work of good angels? I acknowledge that Balaam was inspired by God in the blessings which he gave to the people of the Lord, and in the prediction which he made of the coming of the Messiah; but we must acknowledge, also, the extreme corruption of his heart, his avarice, and all that he would have been capable of doing, if God had permitted him to follow his bad inclination and the inspiration of the evil spirit.

Diodorus of Sicily, on the tradition of the Egyptians, says that the Chaldeans who dwelt at Babylon and in Babylonia were a kind of colony of the Egyptians, and that it was from these last that the sages, or Magi of Babylon, learned the astronomy which gave such celebrity.

We see, in Ezekiel, the King of Babylon, marching against his enemies at the head of his army, stop short where two roads meet, and mingle the darts, to know by magic art, and the flight of these arrows, which road he must take. In the ancients, this manner of consulting the demon by divining wands is known—the Greeks call it Rhabdomanteia.

The prophet Daniel speaks more than once of the magicians of Babylon. King Nebuchadnezzar, having been frightened in a dream, sent for the Magi, or magicians, diviners, aruspices, and Chaldeans, to interpret the dream he had had.

King Belshazzar in the same manner convoked the magicians, Chaldeans, and aruspices of the country, to explain to him the meaning of these words which he saw written on the wall: Mene, Tekel, Perez. All this indicates the habit of the Babylonians to exercise magic art, and consult magicians, and that this pernicious art was held in high repute among them. We read in the same prophet of the trickery made use of by the priests to deceive the people, and make them believe that their gods lived, ate, drank, spoke, and revealed to them hidden things.

I have already mentioned the Magi who came to adore Jesus Christ; there is no doubt that they came from Chaldea or the neighboring country, but differing from those of whom we have just spoken, by their piety, and having studied the true religion.

We read in books of travels that superstition, magic, and fascinations are still very common in the East, both among the fire-worshipers descended from the ancient Chaldeans, and among the Persians, sectaries of Mohammed. St. Chrysostom had sent into Persia a holy bishop, named Maruthas, to have the care of the Christians who were in that country; the King Isdegerde having discovered him, treated him with much consideration. The Magi, who adore and keep up the perpetual fire, which is regarded by the Persians as their principal divinity, were jealous at this, and concealed underground an apostate, who, knowing that the king was to come and pay his adoration to the (sacred) fire, was to cry out from the depth of his cavern that the king must be deprived of his throne because he esteemed the Christian priest as a friend of the gods. The king was alarmed at this, and wished to send Maruthas away; but the latter discovered to him the imposture of the priests; he caused the ground to be turned up where the man’s voice had been heard, and there they found him from whom it proceeded.

This example, and those of the Babylonian priests spoken of by Daniel, and that of some others, who, to satisfy their irregular passions, pretended that their God required the company of certain women, proved that what is usually taken for the effect of the black art is only produced by the knavishness of priests, magicians, diviners, and all kinds of persons who impose on the simplicity and credulity of the people; I do not deny that the devil sometimes takes part in it, but more rarely than is imagined.