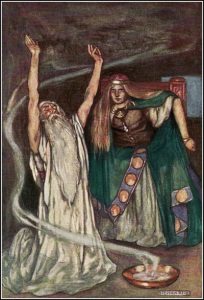 By J. A. MacCulloch.

The 1st of August, coming midway between Beltane and Samhain, was an important festival among the Celts. In Christian times the day became Lammas, but its name still survives in Irish as Lugnasad, in Gaelic as Lunasdal or Lunasduinn, and in Manx as Laa Luanys, and it is still observed as a fair or feast in many districts. Formerly assemblies at convenient centers were held on this day, not only for religious purposes, but for commerce and pleasure, both of these being of course saturated with religion. “All Ireland” met at Taillti, just as “all Gaul” met at Lugudunum, “Lug’s town,” or Lyons, in honor of Augustus, though the feast there had formerly been in honor of the god Lugus. The festival was here Romanized, as it was also in Britain, where its name appears as Goel-aoust, Gul-austus, and Gwyl Awst, now the “August feast,” but formerly the “feast of Augustus,” the name having replaced one corresponding to Lugnasad.

Cormac explains the name Lugnasad as a festival of Lugh mac Ethlenn, celebrated by him in the beginning of autumn, and the Rennes Dindsenchas accounts for its origin by saying that Lug’s foster-mother, Tailtiu, having died on the Calends of August, he directed an assembly for lamentation to be held annually on that day at her tomb. Lug is thus the founder of his own festival, for that it was his, and not Tailtiu’s, is clear from the fact that his name is attached to it. As Lammas was a Christian harvest thanksgiving, so also was Lugnasad a pagan harvest feast, part of the ritual of which passed over to Samhain.  The people made glad before the sun-god—Lug perhaps having that character—who had assisted them in the growth of the things on which their lives depended. Marriages were also arranged at this feast, probably because men had now more leisure and more means for entering upon matrimony. Possibly promiscuous love-making also occurred as a result of the festival gladness, agricultural districts being still notoriously immoral. Some evidence points to the connection of the feast with Lug’s marriage, though this has been allegorized into his wedding the “sovereignty of Erin.” Perhaps we have here a hint of the rite of the sacred marriage, for the purpose of magically fertilizing the fields against next year’s sowing.

Due observance of the feast produced abundance of corn, fruit, milk, and fish. Probably the ritual observed included the preservation of the last sheaf as representing the corn-spirit, giving some of it to the cattle to strengthen them, and mingling it with next year’s corn to impart to it the power of the corn-spirit. It may also have included the slaying of an animal or human incarnation of the corn-spirit, whose flesh and blood quickened the soil and so produced abundance next year, or, when partaken of by the worshippers, brought blessings to them. To neglect such rites, abundant instances of which exist in folk-custom, would be held to result in scarcity. This would also explain, as already suggested, why the festival was associated with the death of Tailtiu or of Carman. The euphemerized queen-goddess Tailtiu and the woman Carman had once been corn-goddesses, evolved from more primitive corn-spirits, and slain at the feast in their female representatives. The story of their death and burial at the festival was a dim memory of this ancient rite, and since the festival was also connected with the sun-god Lug, it was easy to bring him into relationship with the earlier goddess.  Elsewhere the festival, in its memorial aspect, was associated with a king, probably because male victims had come to be representatives of a corn-god who had taken the place of the goddess.