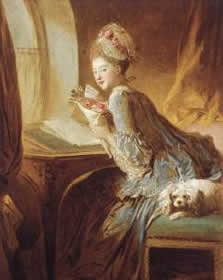 Of all letters, the love-letter should be the most carefully prepared.  Among the written missives, they are the most thoroughly read and re-read, the longest preserved, and the most likely to be regretted in after life.

They should be written with the utmost regard for perfection.  An ungrammatical expression, or word improperly spelled, may seriously interfere with the writer’s prospects, by being turned to ridicule.  For any person, however, to make sport of a respectful, confidential letter, because of some error in the writing, is in the highest degree unladylike and ungentlemanly.

As a rule, the love-letter should be very guardedly written.  Ladies, especially, should be very careful to maintain their dignity when writing them.  When, possibly, in after time the feelings entirely change, you will regret that you wrote the letter at all.  If the love remains unchanged, no harm will certainly be done, if you wrote with judgement and care.

At What Age To Write Love-Letters

The love-letter is the prelude to marriage – a state that, if the husband and wife be fitted for each other, is the most natural and serenely happy; a state, however, that none should enter upon, until, in judgement and physical development, both parties have completely matured.  Many a life has been wrecked by a blind, impulsive marriage, simply resulting from a youthful passion.  As a physiological law, man should be twenty-five, and woman twenty-three, before marrying.

While there may be exceptional cases, as a rule, correspondence should be conducted only with the assent and approval of the parents.  If it is not so, parents are themselves generally to blame.  If children are properly trained, they will implicitly confide in the father and mother, who will retain their love until they are sufficiently matured to choose a companion for life.  If parents neglect to retain this love and confidence, the child, in the yearning for affection, will place the love elsewhere, frequently much too early in life.

Ladies should not allow courtship to be conducted at unreasonable hours.  The evening entertainment, the walk, the ride, are all favorable for the study of each other’s tastes and feelings.  For the gentleman to protract his visit at the lady’s residence until a late hour, is almost sure to give offence to the lady’s parents, and is extremely ungentlemanly.

The love-letter should be honest.  It should say what the writer means, and no more.  For the lady or gentleman to play the part of a coquette, studying to see how many lovers he or she may secure, is very disreputable, and bears in its train a long list of sorrows, frequently wrecking the domestic happiness for a lifetime.  The parties should be honest, also, in the statement of their actual prospects and means of support.  Neither should hold out to the other wealth, or other inducements that will not be realized, as disappointment and disgust will be the only result.

Marrying For a Home

Let nobody commence and continue a correspondence with a view to marriage, for fear that they may never have another opportunity.  It is the mark of judgement and rare good sense to go through life without wedlock, if she cannot marry from love.  Somewhere in eternity, the poet tells us, our true mate will be found.  Do not be afraid of being an “old maid.”  The disgrace attached to that term has long since passed away.  Unmarried ladies of mature years are proverbially among the most intelligent, accomplished and independent to be found in society.  The sphere of woman’s action and work is so widening that she can today, if she desires, handsomely and independently support herself.  She need not, therefore, marry for a home.

Above all, no lady should allow herself to correspond with an intemperate man, with a view to matrimony.  She may reform him, but the chances are that her life’s happiness will be completely destroyed by such a union.  Better, a thousand times, the single, free and independent maidenhood, than for a woman to trail her life in the dust, and bring poverty, shame and disgrace on her children, by marrying a man addicted to dissipated habits.

Let no man make it an ultimate object in life to marry a rich wife.  It is not the possession, but the acquisition, of wealth, that gives happiness.  It is a generally conceded fact that the inheritance of great wealth is a positive mental and moral injury to young men, completely destroying the stimulus to advancement.  So, as a rule, no man is permanently made happier by a marriage of wealth; while he is quite likely to be given to understand, by his wife and others, from time to time, that, whatever consequence he may attain, it is all the result of his wife’s money.  Most independent men prefer to start, as all our wealthiest and greatest men have done, at the foot of the ladder, and earn their independence.  Where, however, a man can bring extraordinary talent or distinguished reputation, as a balance for his wife’s wealth, the conditions are more nearly equalized.  Observation shows that those marriages prove most serenely happy where husband and wife, at the time of marriage, stand, socially, intellectually and pecuniarily, very nearly equal.  For the chances of successful advancement and happiness in after life, let a man wed a woman poorer than himself rather than one that is richer.

Let no couple hesitate to marry because they are poor.  It will cost them less to live after marriage than before – one light, one fire, etc., answering the purpose for both.  Having an object to live for, also, they will commence their accumulations after marriage as never before.  The young woman that demands a certain amount of costly style, beyond the income of her betrothed, no young man should ever wed.  As a general thing, however, women have common sense, and, if husbands will perfectly confide in their wives, telling them exactly their pecuniary condition, the wife will live within the husband’s income.  In the majority of cases where men fail in business, the failure being attributed to the wife’s extravagance, the wife has been kept in entire ignorance of her husband’s pecuniary resources.  The man who would be successful in business, should not only marry a woman who is worthy of his confidence, but he should at all times advise with her.  She is more interested in his prosperity than anybody else, and will be found his best counselor and friend.

The love correspondence of another should be held sacred, the rule of conduct being, to do to others as you wish them to do to you.  No woman, who is a lady, will be guilty of making light of the sentiments that are expressed to her in a letter.  No man, who is a gentleman, will boast of his love conquests, among boon companions, or reveal to others the correspondence between himself and a lady.  If an engagement is mutually broken off, all the love letters should be returned.  To retain them is dishonorable.  They were written under circumstances that no longer exist.  It is better for both parties to wash out every recollection of the past, by returning to the giver every memento of the dead love.

The above advice originally appeared in Hill’s Manual of Social and Business Forms: A Guide to Correct Writing, by Thomas E. Hill, published by the Hill Standard Book Co., Chicago, 1882. Hill’s Manual, an amazingly comprehensive book, was very popular in it’s time.