Abraham Lincoln has appeared on a great number of postage stamps, primarily (but not exclusively) those issued by the United States.  Indeed, when we first started collecting stamps, the 4-cent purple Lincoln stamp was the postage stamp one encountered most frequently.  Nor was this the only 4-cent Lincoln postage stamp issued by the US Post Office. 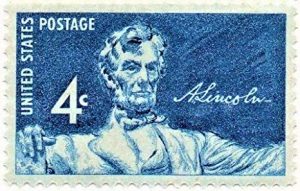 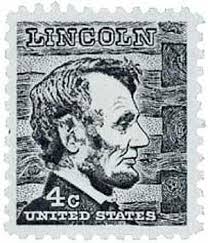 The information below is taken directly from a USPS press release, as are the stamp images:

The stamp art was created by Mark Summers, who is noted for his scratchboard technique, a style distinguished by a dense network of lines etched with exquisite precision. Each stamp features a different aspect of Lincoln’s life. Summers worked under the art direction of Richard Sheaff of Scottsdale, AZ.

The stamp showing Lincoln as a rail-splitter includes the earliest-known photograph of Lincoln, dated 1846, by N. H. Shepherd, and depicts Lincoln as a youth splitting a log for a rail fence on what was then the American frontier. When he was a candidate for president in 1860, the Republican Party used the image of Lincoln as a  “rail-splitter” to enhance his appeal to the workingman.

The stamp featuring Lincoln as a lawyer includes a photograph of Lincoln, dated May 7, 1858, by Abraham Byers, and shows Lincoln in a courtroom in Illinois, the state where he was a practicing attorney for nearly 25 years.

The stamp of Lincoln as a politician includes a Feb. 27, 1860, photograph of Lincoln by Mathew Brady, and shows Lincoln debating Stephen A. Douglas during their 1858 campaign for a U.S. Senate seat from Illinois.

The stamp featuring Lincoln as president, includes a Nov. 8, 1863, photograph of Lincoln by Alexander Gardner, and depicts Lincoln conferring with generals Ulysses S. Grant and William T. Sherman toward the end of the Civil War. The depiction is based on “The Peacemakers” (1868), a painting by George P. A. Healy.