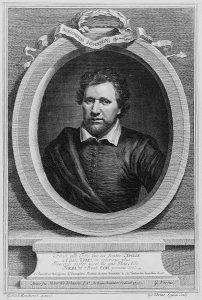 JONSON, BEN or BENJAMIN (1573-1637). —Poet and dramatist, was probably born in Westminster. His father, who died before Ben was four, seems to have come from Carlisle, and the family to have originally belonged to Annandale. He was sent to Westminster School, for which he seems to have been indebted to the kindness of W. Camden, who was one of the masters. His mother, meanwhile, had married a bricklayer, and he was for a time put to that trade, but disliking it, he ran away and joined the army, fighting against the Spaniards in the Low Countries. Returning to England about 1592 he took to the stage, both as an actor and as a playwright. In the former capacity he was unsuccessful. In 1598, having killed a fellow-actor in a duel, he was tried for murder, but escaped by benefit of clergy. About the same time he joined the Roman Catholic Church, in which he remained for 12 years. It was in 1598 also that his first successful play, Every Man in his Humour, was produced, with Shakespeare as one of the players. Every Man out of his Humour (1599), Cynthia’s Revels (1600), and The Poetaster (1601), satirizing the citizens, the courtiers, and the poets respectively, followed. The last called forth several replies, the most notable of which was the Satiromastix (Whip for the Satirist) of Dekker (q.v.), a severe, though not altogether unfriendly, retort, which Jonson took in good part, announcing his intention of leaving off satire and trying tragedy. His first work in this kind was Sejanus (1603), which was not very favourably received. It was followed by Eastward Ho, in which he collaborated with Marston and Chapman. Certain reflections on Scotland gave offence to James I, and the authors were imprisoned, but soon released.

From the beginning of the new reign Jonson devoted himself largely to the writing of Court masques, in which he excelled all his contemporaries, and about the same time entered upon the production of the three great plays in which his full strength is shown. The first of these, Volpone, or the Fox, appeared in 1605; Epicæne, or the Silent Woman in 1609, and The Alchemist in 1610. His second and last tragedy, Catiline, was produced in 1611. Two years later he was in France as companion to the son of Sir W. Raleigh, and on his return he held up hypocritical Puritanism to scorn in Bartholomew Fair, which was followed in 1616 by a comedy, The Devil is an Ass. In the same year he collected his writings—plays, poems, and epigrams—in a folio entitled his Works. In 1618 he journeyed on foot to Scotland, where he was received with much honor, and paid his famous visit to Drummond at Hawthornden. His last successful play, The Staple of Newes, was produced in 1625, and in the same year he had his first stroke of palsy, from which he never entirely recovered. His next play, The New Inn, was driven from the stage, for which in its rapid degeneracy he had become too learned and too moral. A quarrel with Inigo Jones, the architect, who furnished the machinery for the Court masques, lost him Court favor, and he was obliged, with failing powers, to turn again to the stage, for which his last plays, The Magnetic Lady and The Tale of a Tub, were written in 1632 and 1633. Town and Court favor, however, turned again, and he received a pension of £100; that of the best poets and lovers of literature he had always kept. The older poets were his friends, the younger were proud to call themselves, and be called by him, his sons. In 1637, after some years of gradually failing health, he died, and was buried in Westminster Abbey. An admirer caused a mason to cut on the slab over his grave the well-known inscription, “O Rare Ben Jonson.” He left a fragment, The Sad Shepherd. His works include a number of epigrams and translations, collections of poems (Underwoods and The Forest); in prose a book of short essays and notes on various subjects, Discoveries.

Jonson was the founder of a new style of English comedy, original, powerful, and interesting, but lacking in spontaneity and nature. His characters tend to become mere impersonations of some one quality or “humour,” as he called it. Thus he is the herald, though a magnificent one, of decadence. He painted in general with a powerful, but heavy hand; in his masques, however, he often shows a singular gracefulness, especially in the lyrics which he introduces. His character, as given by Drummond, is not a particularly attractive one, “a great lover and praiser of himself, a contemner and scorner of others, given rather to lose a friend than a jest, jealous of every word and action of those about him, especially after drink … a dissembler of ill parts which reign in him, a bragger of some good that he wanteth … passionately kind and angry … oppressed with fantasy which hath ever mastered his reason.” There must, however, have been far other qualities in a man who could command, as Jonson undoubtedly did, the goodwill and admiration of so many of the finest minds of his time. In person he was tall, swarthy, marked with smallpox, and in later years burly.