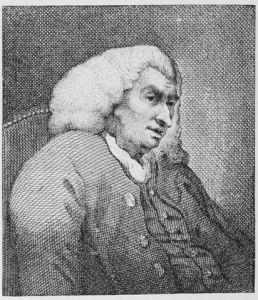 JOHNSON, SAMUEL (1709-1784). —Moralist, essayist, and lexicographer, son of a bookseller at Lichfield, received his early education at his native town, and went in 1728 to Oxford., but had, owing to poverty, to leave without taking a degree. For a short time he was usher in a school at Market Bosworth, but found the position so irksome that he threw it up, and gained a meagre livelihood by working for a publisher in Birmingham. In 1735, being then 26, he m. Mrs. Porter, a widow of over 40, who brought him £800, and to whom he was sincerely attached. He started an academy at Ediol, near Lichfield, which, however, had no success, only three boys, one of whom was David Garrick (q.v.), attending it. Accordingly, this venture was given up, and J. in 1737 went to London accompanied by Garrick. Here he had a hard struggle with poverty, humiliation, and every kind of evil, always, however, quitting himself like the true man he was. He contributed to the Gentleman’s Magazine, furnishing the parliamentary debates in very free and generally much improved form, under the title of “Debates of the Senate of Lilliput.” In 1738 appeared London, a satire imitated from Juvenal which, pub. anonymously, attracted immediate attention, and the notice of Pope. His next work was the life of his unfortunate friend Savage (q.v.) (1744); and in 1747 he began his great English Dictionary. Another satire, The Vanity of Human Wishes, appeared in 1749, and in the same year Irene, a tragedy. His next venture was the starting of the Rambler, a paper somewhat on the lines of the Spectator; but, sententious and grave, it had none of the lightness and grace of its model, and likewise lacked its popularity. It was almost solely the work of J. himself, and was carried on twice a week for two years.

In 1752 his wife, “his dear Tetty” d., and was sincerely mourned; and in 1755 his Dictionary appeared. The patronage of Lord Chesterfield, which he had vainly sought, was then offered, but proudly rejected in a letter which has become a classic. The work made him famous, and Oxford conferred upon him the degree of M.A. He had become the friend of Reynolds and Goldsmith; Burke and others were soon added. The Idler, a somewhat less ponderous successor of the Rambler, appeared in 1758-60, and Rasselas, his most popular work, was written in 1759 to meet the funeral expenses of his mother, who then d. at the age of 90. At last the tide of his fortunes turned. A pension of £300 was conferred upon him in 1762, and the rest of his days were spent in honour, and such comfort as the melancholy to which he was subject permitted. In 1763 he made the acquaintance, so important for posterity, of James Boswell; and it was probably in the same year that he founded his famous “literary club.” In 1764 he was introduced to Mr. Thrale, a wealthy brewer, and for many years spent much of his time, an honoured guest, in his family. The kindness and attentions of Mrs. T., described by Carlyle as “a bright papilionaceous creature, whom the elephant loved to play with, and wave to and fro upon his trunk,” were a refreshment and solace to him. In 1765 his ed. of Shakespeare came out, and his last great work was the Lives of the Poets, in 10 vols. (1779-81). He had in 1775 pub. his Journey to the Western Isles of Scotland, an account of a tour made in the company of Boswell. His last years were darkened by the loss of friends such as Goldsmith and Thrale, and by an estrangement from Mrs. T., on her marriage with Piozzi, an Italian musician. Notwithstanding a lifelong and morbid fear of death, his last illness was borne with fortitude and calmness, soothed by the pious attentions of Reynolds and Burke, and he d. peacefully on December 13, 1784. He was buried in Westminster Abbey, and a monument in St. Paul’s was erected by the “club.” Statues of him were also erected in Lichfield and Uttoxeter. He had received from Oxford and Dublin the degree of LL.D.

Though of rough and domineering manners, J. had the tenderest of hearts, and his house was for years the home of several persons, such as Mrs. Williams and Levett, the surgeon, who had no claim upon him but their helplessness and friendlessness. As Goldsmith aptly said, he “had nothing of the bear but his skin.” His outstanding qualities were honesty and courage, and these characterise all his works. Though disfigured by prejudice and, as regards matters of fact, in many parts superseded, they remain, as has been said, “some excellent, all worthy and genuine works;” and he will ever stand one of the greatest and most honourable figures in the history of English literature. Boswell’s marvellous Life has made J.’s bodily appearance, dress, and manners more familiar to posterity than those of any other man—the large, unwieldy form, the face seamed with scrofula, the purblind eyes, the spasmodic movements, the sonorous voice, even the brown suit, metal buttons, black worsted stockings, and bushy wig, the conversation so full of matter, strength, sense, wit, and prejudice, superior in force and sparkle to the sounding, but often wearisome periods of his written style. Of his works the two most important are the Dictionary, which, long superseded from a philological point of view, made an epoch in the history of the language, and the Lives of the Poets, many of them deformed by prejudice and singularly inadequate criticism, others, almost perfect in their kind, and the whole written in a style less pompous and more natural and lively than his earlier works.

See also: “Lives of the Poets,” by Lytton Strachey