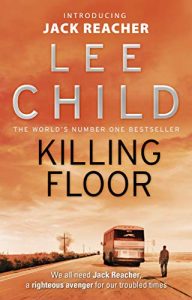 I generally read thrillers when I travel, and if I have a choice, I read Lee Child’s novels featuring hero Jack Reacher.  Reacher is a compelling character, the plots are somewhat realistic, but what is best about the books is that, simply put, Lee Child is an excellent writer.  Read someone else’s thriller after you finish a Jack Reacher book and you’ll see what I mean: suddenly, you’ve gone from taut prose to lots of, “He looked at his cell phone, and realized the call was coming from Mimi, a brilliant biophysicist he’d met at Harvard and hadn’t heard from in years.  His mind raced back to her long blonde hair, her love of Nietzsche, and that Chihuahua she had named Rover.  Ah, those were the days, he thought . . .”  Please!

Anyway, if you want to read the Reacher books in order, which is a nice way to do it, here you go:

Candidly, I stopped reading the books at some point. The books are well-written, but even for someone like myself who is willing to grant a reasonable amount of poetic license, the unrealistic things in the books done by federal law enforcement officers finally got to me.