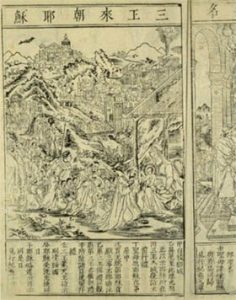 The I Ching is known primarily as a Chinese divinatory or oracular system in the United States. According to tradition, the I Ching, or Book of Changes, was written by the Chinese Emperor Fu Hsi, who lived between 2953 and 2838 B.C.

Most Westerners became aware of the I Ching through the translation into English by James Legge, published in 1899, and reprints of his work were popular through the 1960’s, a time of resurgent interest in all forms of divination, including tarot cards and astrology. Today, numerous good translations exist.

The I Ching is simple to use, though not necessarily simple to decipher, which for many makes the system all the more interesting. Most commonly, one casts three coins or sticks to identify two hexagrams (a series of six lines, any of which may be solid or broken). One then interprets the meaning of the two hexagrams. Below we see an illustration of some of the hexagrams – there are 64 in all – taken from Legge’s work.

You can buy “I Ching Coins” on the internet; these are either old Chinese coins or newly-manufactured items made to look like old Chinese coins. In addition to coins and books, there are other I Ching related products as well, including cards such as the I-Ching Holitzka Deck. (As one might expect, there are 64 cards.) There’s also I Ching software.

If you’d like to see how the I Ching works for free, why not pay a visit to the Matrix Software site? They have a great I Ching oracle that you can use at no charge. You ask a question (optional) and two hexagrams are generated. the second of which marks the development of the situation. As an example, I just asked a question and received Hexagram 56 – Wanderer as the first hexagram, and Hexagram 18 – Decay as the second. Matrix provides a brief explanation as to what is meant. Once you know the hexagrams, you can also research them online for further clarification.