A Brief History of Tarot Cards 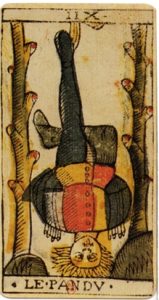 There are few subjects known to Man about which more misleading or false information has been published than the history of tarot cards. Why?

The answers are simple:

The purpose of this article is to offer a historically accurate history of tarot cards, to explain how some misinformation about tarot card history came to exist, and to suggest some further avenues for study and research.

Tarot cards are an early form of today’s playing cards, entering Europe in the 14th century in Italy and France.  A nice facsimile of one of these early decks, the 15th century  Visconti-Sforza Tarocchi Deck, is still available today.  They were described by Feliciano Busi as being “from Saracinia,” i.e., the land of the Saracens, or Arabia.  It’s important to recall that one of Europe’s greatest civilizations – Moorish Spain – was flourishing at this time, and that there was a great deal of intellectual exchange going on between Europe and the Middle East.

Tarot cards (or taroc cards, or tarocchi cards) were originally used for playing a card game called tarocchi, and had no more (or less) to do with foretelling the future than did other types of playing cards.  The major arcana cards did hold secret symbolic meanings for Sufis, who influenced the kabala – this is why correlations are sometimes drawn between the kabala and tarot cards.   In card games, the 22 major arcana cards were trump cards, and the 56 minor arcana cards in four suits are similar to today’s standard deck of 52 cards in four suits, with the obvious difference being that the tarot deck has fourteen cards in each suit.

The origin of the word “tarot”

Numerous theories exist, some linking the word with geographic place names, others much more fanciful.  Idries Shah, in The Sufis, hypothesizes that tarot is a derivation of the Arab word turuq, which means “four ways.”

Nowadays, most modern tarot cards are used for divination or as a symbol-system for personal growth and development.  Tarot cards are often used as vehicles for artistic expression as well, and numerous artists (including Salvador Dali) have used the symbolism of the tarot as a means of creative expression.

How did tarot cards get associated with fortune-telling?  Actually, all playing cards have been used for divinatory purposes.  Tarot cards, with more intricate designs and an older pedigree than modern decks, tend to look the part more.  And, of course, tarot decks were not all that well-known in England – the English having derived their playing card designs from the French – so that when the Order of the Golden Dawn and other British occultists were searching around for things that looked mysterious, tarot cards filled the bill nicely.