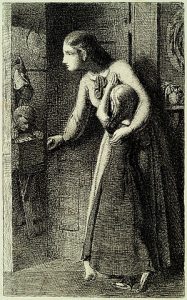 Father Pierre Thyree, a Jesuit, relates an infinite number of anecdotes of houses haunted by ghosts, spirits, and demons; for instance, that of a tribune, named Hesperius, whose house was infested by a demon who tormented the domestics and animals, and who was driven away, says St. Augustine, by a good priest of Hippo, who offered therein the divine sacrifice of the body of our Lord.

St. Germain, Bishop of Capua, taking a bath in one particular quarter of the town, found there Paschaus, a deacon of the Roman Church, who had been dead some time, and who began to wait upon him, telling him that he underwent his purgatory in that place for having favored the party of Laurentius the anti-pope, against Pope Symachus.

St. Gregory of Nicea, in the life of St. Gregory of Neocæsarea, says that a deacon of this holy bishop, having gone into a bath where no one dared go after a certain hour in the evening, because all those who had entered there had been put to death, beheld specters of all kinds, which threatened him in a thousand ways, but he got rid of them by crossing himself and invoking the name of Jesus.

Alexander ab Alexandro, a learned Neapolitan lawyer of the fifteenth century, says that all the world knows that there are a number of houses at Rome so much out of repute on account of the ghosts which appear in them every night that nobody dares to inhabit them. Nicholas Tuba, his friend, a man well known for his probity and veracity, who came once with some of his comrades to try if all that was said of those houses was true, would pass the night in one of them with Alexander. As they were together, wide awake, and with plenty of light, they beheld a horrible specter, which frightened them so much by its terrific voice and the great noise which it made, that they hardly knew what they did, nor what they said; “and by degrees, as we approached,” says he, “with the light, the phantom retreated; at last, after having thrown all the house into confusion, it disappeared entirely.”

I might also relate here the specter noticed by Father Sinson the Jesuit, which he saw, and to which he spoke at Pont-à-Mousson, in the cloister belonging to those fathers; but I shall content myself with the instance which is reported in the Causes Célèbres, and which may serve to undeceive those who too lightly give credit to stories of this kind.

At the Château d’ Arsillier, in Picardy, on certain days of the year, towards November, they saw flames and a horrible smoke proceeding thence. Cries and frightful howlings were heard. The bailiff, or farmer of the château, had got accustomed to this uproar, because he himself caused it. All the village talked of it, and everybody told his own story thereupon. The gentleman to whom the château belonged, mistrusting some contrivance, came there near All-saints’ day with two gentlemen his friends, resolved to pursue the spirit, and fire upon it with a brace of good pistols. A few days after they arrived, they heard a great noise above the room where the owner of the château slept; his two friends went up thither, holding a pistol in one hand and a candle in the other; and a sort of black phantom with horns and a tail presented itself, and began to gambol about before them.

One of them fired off his pistol; the specter, instead of falling, turns and skips before him: the gentleman tries to seize it, but the spirit escapes by the back staircase; the gentleman follows it, but loses sight of it, and after several turnings, the specter throws itself into a granary, and disappears at the moment its pursuer reckoned on seizing and stopping it. A light was brought, and it was remarked that where the specter had disappeared there was a trapdoor, which had been bolted after it entered; they forced open the trap, and found the pretended spirit. He owned all his artifices, and that what had rendered him proof against the pistol shot was buffalo’s hide tightly fitted to his body.

Cardinal de Retz, in his Memoirs, relates very agreeably the alarm which seized himself and those with him on meeting a company of black Augustine friars, who came to bathe in the river by night, and whom they took for a troop of quite another description.

A physician, in a dissertation which he has given on spirits or ghosts, says that a maid servant in the Rue St. Victor, who had gone down into the cellar, came back very much frightened, saying she had seen a specter standing upright between two barrels. Some persons who were bolder went down, and saw the same thing. It was a dead body, which had fallen from a cart coming from the Hôtel-Dieu. It had slid down by the cellar window (or grating), and had remained standing between two casks. All these collective facts, instead of confirming one another, and establishing the reality of those ghosts which appear in certain houses, and keep away those who would willingly dwell in them, are only calculated, on the contrary, to render such stories in general very doubtful; for on what account should those people who have been buried and turned to dust for a long time find themselves able to walk about with their chains? How do they drag them? How do they speak? What do they want? Is it sepulture? Are they not interred? If they are heathens and reprobates, they have nothing to do with prayers. If they are good people, who died in a state of grace, they may require prayers to take them out of purgatory; but can that be said of the specters spoken of by Pliny and Lucian? It is the devil, who sports with the simplicity of men? Is it not ascribing to him most excessive power, by making him the author of all these apparitions, which we conceive he cannot cause without the permission of God? And we can still less imagine that God will concur in the deceptions and illusions of the demon. There is then reason to believe that all the apparitions of this kind, and all these stories, are false, and must be absolutely rejected, as more fit to keep up the superstition and idle credulity of the people than to edify and instruct them.