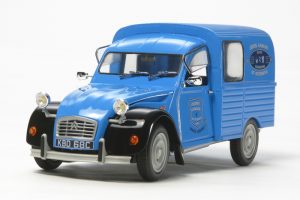 Most builders of model cars (and model airplanes, and model ships) believe that there’s some sort of law of progressive painting skills that apply to building models that we all must follow, which goes something like this:

There’s no such law.

However, of the three books I have on my desk right now, Jeff Wilson’s Modeler’s Guide to Realistic Painting & Finishing explicitly follows the above steps, Aaron Skinner’s Essential Skills for Scale Modelers appears to accept it, and Gary Edmundson’s Painting and Finishing Techniques pretty much assumes that you’re going to airbrush whatever can be easily airbrushed (though he does demonstrate quite a bit of brush painting). These gentlemen aren’t wrong – in fact, all three books are quite good – but I’m not wrong either. The question is not one of right or wrong, but of perspective.

I own an airbrush (actually two), and think that airbrushing is great for people who like to airbrush and who have the right environment in which to airbrush. My problem was that I did not have such an environment available to me for half a year each year, which meant that I was spending six months each year wanting to build model cars and not being able to do so. The reason for this is that I reside in southern Arizona, where for six months each year the temperatures range from close to 100 degrees to well over 100 degrees. So no, I can’t set up a table outdoors to airbrush, and no, I can’t airbrush in the garage because it’s not air-conditioned and it’s so hot my plastic models would start melting if I left them out there for a day or two. Which brings me to the very important Point One:

Point Two: There’s nothing unskillful about using a paintbrush (just ask folks who collect Picassos). In fact, it’s a skill all modelers should have. There’s also nothing childish or unmanly about brush painting, as opposed to airbrushing. If you doubt this, go watch the 1975 movie Three Days of the Condor. I’m not giving anything away in the plot by telling you that the guy in the film hand-painting toy soldiers is a cold-blooded assassin.

Point Four: Set-up and clean up are easier and quicker when you’re hand-painting, which can be great if you have other things to do in life (work, exercise, shop for groceries) besides build models.

A model. Some paint. Some brushes. Maybe something to clean the brushes. Okay, I’ll be more specific, but the model is your choice.

Paint. This isn’t the place to get into the whole enamel-versus-acrylic debate. Enamel is probably better for brush painting because it leaves fewer brushstrokes, but it’s also much more toxic than acrylic. My personal preference is for acrylic paints, simply because of the toxicity issue. (The aforementioned movie assassin used enamels but, hey, he’s an assassin, and with a job like that paint toxicity is probably the least of his worries.) I have a strong preference for all things Tamiya, but when it comes to paint I usually go with Vallejo Model Color acrylics. 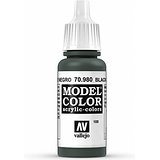 Paint Thinner. You’ll need to thin the paint you use, Go with the manufacturer’s recommendations. Thus, if you use Tamiya acrylics, use Tamiya thinner. Some folks use 91% isopropyl alcohol to thin this paint, some use a ratio of 1:1, everyone will tell you that you need to experiment to get it just right because it can vary from color to color in the same manufacturer’s line of paints. Acrylics can be thinned with distilled water, and I once read somewhere of someone using a mixture of half Vallejo Model Color thinner and half distilled water as a thinner, which is what I do now. 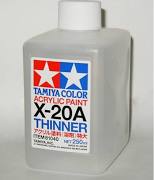 Brushes. Brushes are generally not expensive, so some simple advice: get the best quality you can (no ultra-cheapo “brush sets”), and have a variety of different sizes, including very fine brushes like sizes 0, 00, 000, etc. You’ll also want different shapes, like angle, rigger, filbert, etc. I’ve tried brushes from a number of different manufacturers, and you’ll need to do that too to figure out what appeals to you. The brush part of a paintbrush will be made either from animal hair or synthetic material. My personal preference is for synthetic, because I don’t think some animal needs to be killed just so I can have fun painting a model car. Besides, the good synthetic brushes are just as good as the non-synthetics. One decent inexpensive set I’ve found is the Heartybay 10-Piece Nylon Hair Brush Set.

Old Coffee Mug That You’ll Never Ever Drink Out of Again. You have to store your brushes, brush side up, and that’s what old mugs are made for. If you use both acrylic and enamel then you need two mugs, because you want to keep the brushes for acrylic paint separate from those for enamel.

Plastic Palettes, or a Ceramic Palette If You Like Spending Money and Cleaning Things. 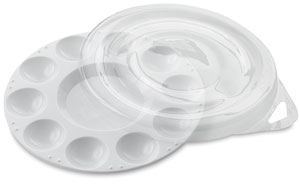 Actually, you have to clean the plastic ones, too, but at some point they’re disposable. The one pictured at the left costs about two bucks at Dick Blick’s Art Supply. Palettes are used for mixing paints, including mixing paint with thinner.

Toothpicks to stir paint. Generally, You don’t want to shake the bottle, you want to stir the paint, which is where the toothpicks come in. However, with Vallejo paints that come in an eyedrop-style bottle, stirring might be too difficult, in which case shaking is the only real way to go.

Brush cleaner in little clear bottle. Swish the brush around until it’s clean; you can also gently run it along the side of the bottle. Don’t press it down on the bottom of the bottle, because this can ruin the brush. I don’t dispose of old paint or old paint thinner down the drains in my house, and I do make the effort to dispose of the stuff in an environmentally-friendly way.

You still need to do things you’d normally do to get a good job; fill gaps, remove molding flash, wash and dry the model, use primer before painting, do multiple thin coats, and use superfine sanding at the end. Do everything right, and you’ll end up with a great model.