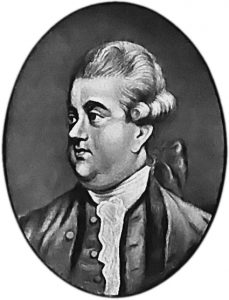 GIBBON, EDWARD (1737-1794). —Historian, was born at Putney of an ancient Kentish family. His father was Edward Gibbon, and his mother Judith Porten. He was the only one of a family of seven who survived infancy, and was himself a delicate child with a precocious love of study. After receiving his early education at home he was sent to Westminster School, and when 15 was entered at Magdalen Coll., Oxford, where, according to his own account, he spent 14 months idly and unprofitably. Oxford was then at its lowest ebb, and earnest study or effort of any kind had little encouragement. Gibbon, however, appears to have maintained his wide reading in some degree, and his study of Bossuet and other controversialists led to his becoming in 1753 a Romanist [Catholic]. To counteract this his father placed him under the charge of David Mallet, the poet, deist, and editor of Bolingbroke’s works, whose influence, not unnaturally, failed of the desired effect, and Gibbon was next sent to Lausanne, and placed under the care of a Protestant pastor, M. Pavilliard. Various circumstances appear to have made Gibbon not unwilling to be re-converted to Protestantism; at all events he soon returned to the reformed doctrines. At Lausanne he remained for over four years, and devoted himself assiduously to study, especially of French literature and the Latin classics.

At this time also he became engaged to Mademoiselle Suzanne Curchod; but on the match being peremptorily opposed by his father it was broken off. With the lady, who eventually became the wife of Necker, and the mother of Madame de Staël, he remained on terms of friendship. In 1758 Gibbon returned to England, and in 1761 pub. Essai sur l’Etude de la Littérature, translated into English in 1764. About this time he made a tour on the Continent, visiting Paris, where he stayed for three months, and thence proceeding to Switzerland and Italy. There it was that, musing amid the ruins of the Capitol at Rome on October 15, 1764, he formed the plan of writing the history of the Decline and Fall of the Roman Empire. He returned to England in 1765, and in 1770 his father died, leaving him the embarrassed estate of Buriton, which had been his usual home when in England. With a view to recovering his affairs, he left his estate and lived in London where, in 1772, he seriously set himself to realise the great plan which, since its conception, had never been out of his thoughts. The first chapter was written three times, and the second twice before he could satisfy himself that he had found the style suited to his subject. The progress of the work was delayed by the fact that Gibbon had meanwhile (1774) entered the House of Commons, where, as member for Liskeard, he was a steady, though silent, supporter of Lord North in his American policy. He subsequently sat for Lymington, and held office as a Commissioner of Trade and Plantations 1779-82.

The first volume of the Decline and Fall appeared in 1776, and was received with acclamation, and it was not until some time had elapsed that the author’s treatment of the rise of Christianity excited the attention and alarm of the religious and ecclesiastical world. When, however, the far-reaching nature of his views was at length realised, a fierce and prolonged controversy arose, into which Gibbon himself did not enter except in one case where his fidelity as an historian was impugned. The second and third volumes appeared in 1781, and thereafter (1783) Gibbon returned to Lausanne, where he lived tranquilly with an early friend, M. Deyverdun, devoting his mornings to the completion of his history, and his evenings to society. At length, on the night of June 27, 1787, in the summer-house of his garden, the last words were penned, and the great work of his life completed. Of the circumstances, and of his feelings at the moment, he has himself given an impressive account. The last three volumes were issued in 1788, Gibbon having gone to London to see them through the press. This being done he returned to Lausanne where, within a year, his beloved friend Deyverdun died. His last years were clouded by ill-health, and by anxieties with regard to the French Revolution. In 1793, though travelling was a serious matter for him, he came to England to comfort his friend Lord Sheffield on the death of his wife, took ill, and died suddenly in London on January 16, 1794.

The place of Gibbon among historians is in the first rank, and if the vast scale of his work and the enormous mass of detail involved in it are considered along with the learning and research employed in accumulating the material, and the breadth of view, lucidity of arrangement, and sense of proportion which have fused them into a distinct and splendid picture, his claims to the first place cannot be lightly dismissed. His style, though not pure, being tinged with Gallicisms, is one of the most noble in our literature, rich, harmonious, and stately; and though sources of information not accessible to him have added to our knowledge, and have shown some of his conclusions to be mistaken, his historical accuracy has been comparatively little shaken, and his work is sure of permanence. As a man Gibbon seems to have been somewhat calm and cool in his feelings, though capable of steady and affectionate friendships, such as those with Deyverdun and the Sheffields, which were warmly reciprocated, and he appears to have been liked in society, where his brilliant conversational powers made him shine. He was vain, and affected the manners of the fine gentleman, which his unattractive countenance and awkward figure, and latterly his extreme corpulence, rendered somewhat ridiculous. He left an interesting Autobiography.