True Encounters With the Supernatural

A lot of people ask me, “What’s the scariest thing that’s ever happened to you?”

Two stories, both true, follow.  Both of these events happened  during the two years that I lived in Round Lake, New York, a charming community in Saratoga County that had begun life as a Methodist Campground back in the 1860’s.  I had a very nice little Victorian house there, with the requisite gingerbread exterior trim.  My realtor called it “the doll house,” and it was a little doll house in some ways.  I don’t think the house itself was haunted, just that I was very sensitive to things there.

The Black Cat, and the Missing Letter from Salem

It was late autumn, and I had just returned home from a brief vacation in Salem, Massachusetts.  It had been my second time there, and this time I’d done the whole Witch Museum tour thing, part of which involved standing around a pentagram.  (My second wife, whom I was with at the time, and who was quite well-versed in the occult, thought this a particularly dangerous thing to do, but there we were.)   Anyway, nothing bad had happened in Salem.  We’d had a good time, and were well rested from our mini-vacation.

At the time, I was working for the phone company and running a small mail-order business on the side.  I kept a Post Office box in nearby Clifton Park for business purposes.  It was convenient, because the lobby where the boxes were was kept open after the Post Office closed.  Although darkness had already fallen on this particular evening shortly after my return from Salem, it seemed like a good time to go check the box for mail.

As I went to the driveway toward my car, a black cat appeared.  There weren’t many stray cats in Round Lake, but it wasn’t inconceivable that there would be one.  This particular cat was incredibly affectionate and demonstrative – and what he seemed to be demonstrating was that he wanted to get in the car with me.  I didn’t think this was a great idea (I like cats, but I’m allergic to them), but he was insistent, and would not move out of the way of the car.  I went inside and got reinforcement in the person of my wife.  She couldn’t persuade the cat that he didn’t want to drive with me either, so in the end we humans capitulated.  All three of us got in the car and headed for the post office.

The cat was a little angel on the trip there.  When I retrieved my mail, there were a few sales flyers and, coincidentally, a letter with a return address in Salem, Massachusetts.  I did not open the letter, but was curious about it.  (I made very few sales from that business, and a letter could have contained a check, which would have been most welcome.)

On the trip back, the cat’s behavior changed from pleasantly passive to demonically frantic.  He made horrendous screeching noises and threw himself back and forth across the back seat.  Thank God it was a short drive!  We got home, opened the car door, and he flew out, never to be seen again.  Oddly, the letter with the Salem return address was also missing.  We went through that entire car over and over, but never found the letter. 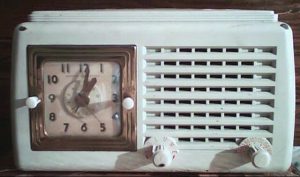 The Radio In the Unused Bedroom

The main part of the house, probably built in the late 1880’s or 1890’s, had two smallish bedrooms upstairs and one very small room, which originally would either have been a dressing room or a baby’s room.  We had no real use for the small room, so used it mainly for storage.  One of the things that I kept on the back shelf of the room was a small, battery-operated transistor radio.  I thought it a good thing to have fairly handy, in case we lost power, but we never did lose power, and after about a year’s time it, like everything else in the small room, sat gathering an even layer of dust.

Let me describe this radio.  It would fit in the palm of one’s hand, and used a single 9-volt battery for power.  It was controlled via two side dials, the first of which controlled the tuning.  The second dial controlled the volume, and was also the on/off control.  The dial locked into the off position fairly solidly, and it took more than a little effort to turn the radio on – one had to really press hard with one’s thumb.  Of course, once you switched the radio on, you had to keep moving the dial to get to a point of volume where you could actually hear something.

The house was only occupied by myself, my wife, and my dog.  None of us had gone into the small storage room for at least a few months, and the door to it was kept closed.  On the night this event occurred, the three of us had gathered, as was our custom, in the main bedroom (one would have to be a very low-on-the-totem-pole “master” to have called it a master bedroom), which was next to the little storage room.

The evening passed quietly.  Perhaps I’d read a bit before going to sleep, as was my custom.  By 10:30 pm, both human and canine occupants of the house were fast asleep, and peacefully remained that way until about 2 a.m. when we were suddenly and alarmingly awakened by the sound of the transistor radio in the room next door blasting out music!  I sat bolt upright (who wouldn’t?), and almost as quickly realized that I would have to go investigate – not an attractive idea.

I let the dog out into the hallway first.  He was a brave beast, and dashed all around, finding nothing.  Still, the music continued to blare at an incredible volume.  With my dog by my side, I opened the door to the small room and found – nothing.  Nothing had been disturbed, not a speck of dust.   Then I turned the radio off.

I’ve never found a suitable explanation for this.