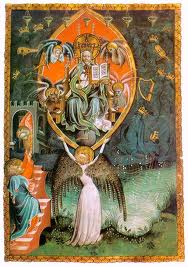 he Life of St. Fursius, written a short time after his death, which happened about the year 653, reports several visions seen by this holy man. Being grievously ill, and unable to stir, he saw himself in the midst of the darkness raised up, as it were, by the hands of three angels, who carried him out of the world, then brought him back to it, and made his soul re-enter his body, to complete the destination assigned him by God. Then he found himself in the midst of several people, who wept for him as if he were dead, and told him how, the day before, he had fallen down in a swoon, so that they believed him to be dead. He could have wished to have some intelligent persons about him to relate to them what he had seen; but having no one near him but rustics, he asked for and received the communion of the body and blood of the Savior, and continued three days longer awake.

The following Tuesday, he fell into a similar swoon, in the middle of the night; his feet became cold, and raising his hands to pray, he received death with joy. Then he saw the same three angels descend who had already guided him. They raised him as the first time, but instead of the agreeable and melodious songs which he had then heard, he could now hear only the frightful howlings of the demons, who began to fight against him, and shoot inflamed darts at him. The Angel of the Lord received them on his buckler, and extinguished them. The devil reproached Fursius with some bad thoughts, and some human weaknesses, but the angels defended him, saying, “If he has not committed any capital sins, he shall not perish.”

As the devil could not reproach him with anything that was worthy of eternal death, he saw two saints from his own country—St. Béan and St. Medan, who comforted him and announced to him the evils with which God would punish mankind, principally because of the sins of the doctors or learned men of the church, and the princes who governed the people;—the doctors for neglecting to declare the word of God, and the princes for the bad examples they gave their people. After which, they sent him back into his body again. He returned into it with repugnance, and began to relate all that he had seen; they poured spring water upon his body, and he felt a great warmth between his shoulders. After this, he began to preach throughout Hibernia; and the Venerable Bede says that there was in his monastery an aged monk who said that he had learned from a grave personage well worthy of belief, that he had heard these visions described by St. Fursius himself. This saint had not the least doubt that his soul was really separated from his body, when he was carried away in his trance.

This is taken from Phantom World, originally published in 1850.