Flinch was, in 1913, advertised as “The Acme of Parlor Games.”  It is a great game, has obviously been around for a long time, and remains popular today.

The Flinch set pictured here is from 1913, and was manufactured by the Flinch Card Co. of Kalamazoo, Mich.  The game was already established by that time.  The rules were first copyrighted in 1901 by A. J. Patterson, who copyrighted them again (presumably with a few changes) in 1902.  In 1903 they were copyrighted by the Flinch Card Co.  The rules were revised in 1913 – they are said to be “IMPROVED Rules for Playing Flinch” – and are similar to the rules in use today.

Flinch was, in 1913, played with a pack of 150 cards consisting of 10 series, each numbered from 1 to 15 consecutively.  The original concept of the game remains the same to this day – you have to get rid of the cards in your Stockpile. You’ll do this by playing them in numerical sequence – whenever possible – onto the Play Piles in the center of the table. 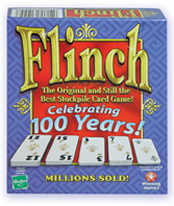 The game is today produced by Winning Moves, with a deck of 144 cards.