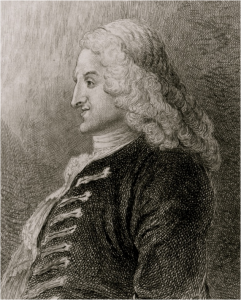 FIELDING, HENRY (1707-1754). —Novelist, was born at Sharpham Park, near Glastonbury. His father was General Edmund Fielding, descended from the Earls of Denbigh and Desmond, and his mother was the daughter of Sir Henry Gould of Sharpham Park. His childhood was spent at East Stour, Dorset, and his education was received at first from a tutor, after which he was sent to Eton. Following a love affair with a young heiress at Lyme Regis he was sent to Leyden to study law, where he remained until his f., who had entered into a second marriage, and who was an extravagant man, ceased to send his allowance. Thrown upon his own resources, he came to London and began to write light comedies and farces, of which during the next few years he threw off nearly a score. The drama, however, was not his true vein, and none of his pieces in this kind have survived, unless Tom Thumb, a burlesque upon his contemporary playwrights, be excepted.

About 1735 he married Miss Charlotte Cradock, a beautiful and amiable girl to whom, though he gave her sufficient cause for forbearance, he was devotedly attached. She is the prototype of his “Amelia” and “Sophia.” She brought him £1500, and the young couple retired to East Stour, where he had a small house inherited from his mother. The little fortune was, however, soon dissipated; and in a year he was back in London, where he formed a company of comedians, and managed a small theatre in the Haymarket. Here he produced successfully Pasquin, a Dramatic Satire on the Times, and The Historical Register for 1736, in which Walpole was satirised. This enterprise was brought to an end by the passing of the Licensing Act, 1737, making the imprimatur of the Lord Chamberlain necessary to the production of any play. Fielding thereupon read law at the Middle Temple, was called to the Bar in 1740, and went the Western Circuit. The same year saw the publication of Richardson’s Pamela, which inspired Fielding with the idea of a parody, thus giving rise to his first novel, Joseph Andrews. As, however, the characters, especially Parson Adams, developed in his hands, the original idea was laid aside, and the work assumed the form of a regular novel. It was published in 1742, and though sharing largely in the same qualities as its great successor, Tom Jones, its reception, though encouraging, was not phenomenally cordial.

Immediately after this a heavy blow fell on Fielding in the death of his wife. The next few years were occupied with writing his Miscellanies, which contained, along with some essays and poems, two important works, A Journey from this World to the Next, and The History of Jonathan Wild the Great, a grave satire; and he also conducted two papers in support of the Government, The True Patriot and The Jacobite Journal, in consideration of which he was appointed Justice of the Peace for Middlesex and Westminster, and had a pension conferred upon him. In 1746 he set convention at defiance by marrying Mary MacDaniel, who had been his first wife’s maid, and the nurse of his children, and who proved a faithful and affectionate companion. F. showed himself an upright, diligent, and efficient magistrate, and his Inquiry into the Increase of Robbers (1751), with suggested remedies, led to beneficial results.

By this time, however, the publication of his great masterpiece, The History of Tom Jones, a Foundling (1749), had given him a place among the immortals. All critics are agreed that this book contains passages offensive to delicacy, and some say to morality. This is often excused on the plea of the coarser manners of the age; but a much stronger defence is advanced on the ground that, while other novelists of the time made immorality an incentive to merriment, Fielding’s treatment of such subjects, as Lowell has said, “shocks rather than corrupts,” and that in his pages evil is evil. On the other hand, there is universal agreement as to the permanent interest of the types of character presented, the profound knowledge of life and insight into human nature, the genial humour, the wide humanity, the wisdom, and the noble and masculine English of the book. His only other novel, Amelia, which some, but these a small minority, have regarded as his best, was pub. in 1751. His health was now thoroughly broken, and in 1753, as a forlorn hope, he went in search of restoration to Lisbon, where he died on October 8, and was buried in the English cemetery. His last work was a Journal of his voyage. Though with many weaknesses and serious faults, Fielding was fundamentally a man of honest and masculine character, and though improvident and reckless in his habits, especially in earlier life, he was affectionate in his domestic relations, and faithful and efficient in the performance of such public duties as he was called to discharge. Thackeray thus describes his appearance, “His figure was tall and stalwart, his face handsome, manly, and noble-looking; to the last days of his life he retained a grandeur of air and, though worn down by disease, his aspect and presence imposed respect upon people round about him.”