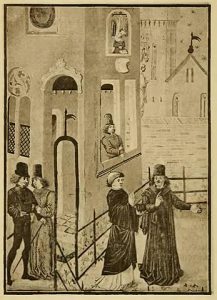 The garden in which I am straying has so many diversions to catch my eye, to engage my attention and to inspire reminiscence that I find it hard to treat of its beauties methodically.  I find myself wandering up and down, hither and thither, in so irresponsible a fashion that I marvel you have not abandoned me as the most irrational of madmen.

Yet how could it be otherwise?  All around me I see those things that draw me from the pathway I set out to pursue: like a heedless butterfly I flit from this sweet unto that, glorying and reveling in the sunshine and the posies.  There is little that is selfish in a love like this, and herein we have another reason why the passion for books is beneficial.  He who loves women must and should love some one woman above the rest, and he has her to his keeping, which I esteem to be one kind of selfishness.

But he who truly loves books loves all books alike, and not only this, but it grieves him that all other men do not share with him this noble passion. Verily, this is the most unselfish of loves!

To return now to the matter of booksellers, I would fain impress you with the excellences of the craft, for I know their virtues.  My association with them has covered so long a period and has been so intimate that even in a vast multitude of people I have no difficulty in determining who are the booksellers and who are not.

For, having to do with books, these men in due time come to resemble their wares not only in appearance but also in conversation.  My bookseller has dwelt so long in his corner with folios and quartos and other antique tomes that he talks in black-letter and has the modest, engaging look of a brown old stout binding, and to the delectation of discriminating olfactories he exhaleth an odor of mildew and of tobacco commingled, which is more grateful to the true bibliophile than all the perfumes of Araby.

I have studied the craft so diligently that by merely clapping my eyes upon a bookseller I can tell you with certainty what manner of books he sells; but you must know that the ideal bookseller has no fads, being equally proficient in and a lover of all spheres, departments, branches, and lines of his art.  He is, moreover, of a benignant nature, and he denies credit to none; yet, withal, he is righteously so discriminating that he lets the poor scholar have for a paltry sum that which the rich parvenu must pay dearly for.  He is courteous and considerate where courtesy and consideration are most seemly.

“You would make a better porter,” said he.

This was too much for the young lexicographer’s patience.  He picked up a folio and incontinently let fly at the bookseller’s head,  and then stepping over the prostrate victim he made his exit, saying:  “Lie there, thou lump of lead!”

This bookseller was Osborne, who had a shop at Gray’s Inn Gate.  To Boswell Johnson subsequently explained:  “Sir, he was impertinent to me, and I beat him.”

Jacob Tonson was Dryden’s bookseller; in the earlier times a seller was also a publisher of books.  Dryden was not always on amiable terms with Tonson, presumably because Dryden invariably was in debt to Tonson.  On one occasion Dryden asked for an advance of money, but Tonson refused upon the grounds that the poet’s overdraft already exceeded the limits of reasonableness.  Thereupon Dryden penned the following lines and sent them to Tonson with the message that he who wrote these lines could write more:

With leering looks, bull-faced and freckled fair
With two left legs, with Judas-colored hair,
And frowzy pores that taint the ambient air.

These lines wrought the desired effect: Tonson sent the money which Dryden had asked  for.  When Dryden died Tonson made overtures to Pope, but the latter soon went over to Tonson’s most formidable rival, Bernard Lintot.  On one occasion Pope happened to be writing to both publishers, and by a curious blunder he enclosed to each the letter intended for the other.  In the letter meant for Tonson, he said that Lintot was a scoundrel, and in the letter meant for Lintot he declared that Tonson was an old rascal.  We can fancy how little satisfaction Messrs. Lintot and Tonson derived from the perusal of these mis-sent epistles.

Andrew Millar was the publisher who had practical charge of the production of Johnson’s dictionary.  It seems that Johnson drew out his stipulated honorarium of eight thousand dollars (to be more exact, £1575) before the dictionary went to press; this is not surprising, for the work of preparation consumed eight years, instead of three, as Johnson had calculated.  Johnson inquired of the messenger what Millar said when he received the last batch of copy. The messenger answered:  “He said ‘Thank God I have done  with him.’”  This made Johnson smile.  “I am glad,” said he, quietly, “that he thanks God for anything.”

I was not done with my discourse when a book was brought in from Judge Methuen; the interruption was a pleasant one.  “I was too busy last evening,” writes the judge, “to bring you this volume which I picked up in a La Salle street stall yesterday.  I know your love for the scalawag Villon, so I am sure you will fancy the lines which, evidently, the former owner of this book has scribbled upon the fly-leaf.”  Fancy them?  Indeed I do; and if you dote on the “scalawag” as I dote on him you also will declare that our anonymous poet has not wrought ill.

My acquaintance with Master Villon was made in Paris during my second visit to that  fascinating capital, and for a while I was under his spell to that extent that I would read no book but his, and I made journeys to Rouen, Tours, Bordeaux, and Poitiers for the purpose of familiarizing myself with the spots where he had lived, and always under the surveillance of the police.  In fact, I became so infatuated of Villonism that at one time I seriously thought of abandoning myself to a life of crime in order to emulate in certain particulars at least the example of my hero.

There were, however, hindrances to this scheme, first of which was my inability to find associates whom I wished to attach to my cause in the capacity in which Colin de Cayeulx and the Baron de Grigny served Master Francois.  I sought the companionship of several low-browed, ill-favored fellows whom I believed suited to my purposes, but almost immediately I wearied of them, for they had never looked into a book and were so profoundly ignorant as to be unable to distinguish between a folio and a thirty-twomo.

Then again it befell that, while the Villon  fever was raging within and I was contemplating a career of vice, I had a letter from my uncle Cephas, apprising me that Captivity Waite (she was now Mrs. Eliphalet Parker) had named her first-born after me!  This intelligence had the effect of cooling and sobering me; I began to realize that, with the responsibility the coming and the christening of Captivity’s first-born had imposed upon me, it behooved me to guard with exceeding jealousy the honor of the name which my namesake bore.

While I was thus tempest-tossed, Fanchonette came across my pathway, and with the appearance of Fanchonette every ambition to figure in the annals of bravado left me.  Fanchonette was the niece of my landlady; her father was a perfumer; she lived with the old people in the Rue des Capucins.  She was of middling stature and had blue eyes and black hair.  Had she not been French, she would have been Irish, or, perhaps, a Grecian.  Her manner had an indefinable charm.

It was she who acquainted me with Beranger; that is why I never take up that precious volume that I do not think, sweetly and tenderly, of Fanchonette.  The book is bound, as you see, in a dainty blue, and the border toolings are delicate tracings of white—all for a purpose, I can assure you.  She used to wear a dainty blue gown, from behind the nether hem of which the most immaculate of petticoats peeped out.

If we were never boys, how barren and lonely our age would be.  Next to the ineffably blessed period of youth there is no time of life pleasanter than that in which serene old age reviews the exploits and the prodigies of boyhood.  Ah, my gay fellows, harvest your crops diligently, that your barns and granaries be full when your arms are no longer able to wield the sickle!

Haec meminisse—to recall the old time—to see her rise out of the dear past—to hear Fanchonette’s voice again—to feel the grace of springtime—how gloriously sweet this is!  The little quarrels, the reconciliations, the coquetries, the jealousies, the reproaches, the forgivenesses—all the characteristic and endearing haps of the Maytime  of life—precious indeed are these retrospections to the hungry eyes of age!

She wed with the perfumer’s apprentice; but that was so very long ago that I can pardon, if not forget, the indiscretion.  Who knows where she is to-day?  Perhaps a granny beldame in a Parisian alley; perhaps for years asleep in Pere la Chaise.  Come forth, beloved Beranger, and sing me the old song to make me young and strong and brave again!