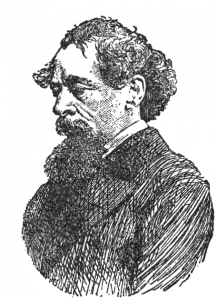 DICKENS, CHARLES (1812-1870). —Novelist, born at Landport, near Portsmouth, where his father was a clerk in the Navy Pay-Office. The hardships and mortifications of his early life, his want of regular schooling, and his miserable time in the blacking factory, which form the basis of the early chapters of David Copperfield, are largely accounted for by the fact that his father was to a considerable extent the prototype of the immortal Mr. Micawber; but partly by his being a delicate and sensitive child, unusually susceptible to suffering both in body and mind.  He had, however, much time for reading, and had access to the older novelists, Fielding, Smollett, and others. A kindly relation also took him frequently to the theatre, where he acquired his life-long interest in, and love of, the stage. After a few years’ residence in Chatham, the family removed to London, and soon thereafter his father became an inmate of the Marshalsea, in which by-and-by the whole family joined him, a passage in his life which furnishes the material for parts of Little Dorrit.

This period of family obscuration happily lasted but a short time: the elder Dickens managed to satisfy his creditors, and soon after retired from his official duties on a pension. About the same time Dickens had two years of continuous schooling, and shortly afterwards he entered a law office. His leisure he devoted to reading and learning shorthand, in which he became very expert. He then acted as parliamentary reporter, first for The True Sun, and from 1835 for the Morning Chronicle. Meanwhile he had been contributing to the Monthly Magazine and the Evening Chronicle the papers which, in 1836, appeared in a coll. form as Sketches by Boz; and he had also produced one or two comic burlettas. In the same year he married Miss Ann Hogarth; and in the following year occurred the opportunity of his life. He was asked by Chapman and Hall to write the letterpress for a series of sporting plates to be done by Robert Seymour who, however, died shortly after, and was succeeded by Hablot Browne (Phiz), who became the illustrator of most of Dickens’s novels. In the hands of Dickens the original plan was entirely altered, and became the Pickwick Papers which, appearing in monthly parts during 1837-39, took the country by storm. Simultaneously Oliver Twist was coming out in Bentley’s Miscellany.

Thenceforward Dickens’s literary career was a continued success, and the almost yearly publication of his works constituted the main events of his life. Nicholas Nickleby appeared in serial form 1838-39. Next year he projected Master Humphrey’s Clock, intended to be a series of miscellaneous stories and sketches. It was, however, soon abandoned, The Old Curiosity Shop and Barnaby Rudge taking its place. The latter, dealing with the Gordon Riots, is, with the partial exception of the Tale of Two Cities, the author’s only excursion into the historical novel. In 1841 Dickens went to America, and was received with great enthusiasm, which, however, the publication of American Notes considerably damped, and the appearance of Martin Chuzzlewit in 1843, with its caustic criticisms of certain features of American life, converted into extreme, though temporary, unpopularity. The first of the Christmas books—the Christmas Carol—appeared in 1843, and in the following year Dickens went to Italy, where at Genoa he wrote The Chimes, followed by The Cricket on the Hearth, The Battle of Life, and The Haunted Man. In January, 1846, he was appointed first editor of The Daily News, but resigned in a few weeks. The same year he went to Switzerland, and while there wrote Dombey and Son, which was published in 1848, and was immediately followed by his masterpiece, David Copperfield (1849-50).

Shortly before this he had become manager of a theatrical company, which performed in the provinces, and he had in 1849 started his magazine, Household Words. Bleak House appeared in 1852-53, Hard Times in 1854, and Little Dorrit 1856-57. In 1856 he bought Gadshill Place, which, in 1860, became his permanent home. In 1858 he began his public readings from his works, which, while eminently successful from a financial point of view, from the nervous strain which they entailed, gradually broke down his constitution, and hastened his death. In the same year he separated from his wife, and consequent upon the controversy which arose thereupon he brought Household Words to an end, and started All the Year Round, in which appeared A Tale of Two Cities (1859), and Great Expectations (1860-61). Our Mutual Friend came out in numbers (1864-65). Dickens was now in the full tide of his readings, and decided to give a course of them in America. Thither accordingly he went in the end of 1867, returning in the following May. He had a magnificent reception, and his profits amounted to £20,000; but the effect on his health was such that he was obliged, on medical advice, finally to abandon all appearances of the kind. In 1869 he began his last work, The Mystery of Edwin Drood, which was interrupted by his death from an apoplectic seizure on June 8, 1870.

One of Dickens’s most marked characteristics is the extraordinary wealth of his invention as exhibited in the number and variety of the characters introduced into his novels. Another, especially, of course, in his entire works, is his boundless flow of animal spirits. Others are his marvellous keenness of observation and his descriptive power. And the English race may well, with Thackeray, be “grateful for the innocent laughter, and the sweet and unsullied pages which the author of David Copperfield gives to [its] children.” On the other hand, his faults are obvious, a tendency to caricature, a mannerism that often tires, fun often forced, and pathos not seldom degenerating into mawkishness. But at his best how rich and genial is the humour, how tender often the pathos. And when all deductions are made, he had the laughter and tears of the English-speaking world at command for a full generation while he lived, and that his spell still works is proved by a continuous succession of new editions.