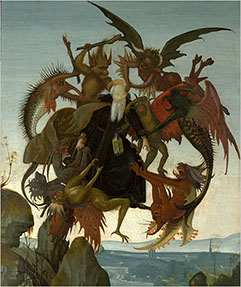 An Essay in Illustration of the Belief in the Existence of Devils, and the Powers Possessed By Them, as It Was Generally Held during the Period of the Reformation, and the Times Immediately Succeeding; with Special Reference to Shakespeare and His Works by

This Essay is an expansion, in accordance with a preconceived scheme, of two papers, one on “The Witches in Macbeth,” and the other on “The Demonology of Shakespeare,” which were read before the New Shakespeare Society in the years 1877 and 1878. The Shakespeare references in the text are made to the Globe Edition.

The writer’s best thanks are due to his friends Mr. F.J. Furnivall and Mr. Lauriston E. Shaw, for their kindness in reading the proof sheets, and suggesting emendations.

“We are too hasty when we set down our ancestors in the gross for fools for the monstrous inconsistencies (as they seem to us) involved in their creed of witchcraft.”
—C. LAMB.

“But I will say, of Shakespeare’s works generally, that we have no full impress of him there, even as full as we have of many men. His works are so many windows, through which we see a glimpse of the world that was in him.”—T. CARLYLE.

The Empire of the Supernatural