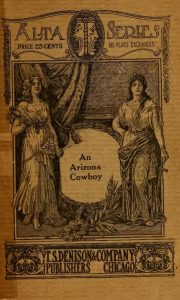 To the Ranchmen of Texas

‘Way out in Western Texas, where the Clear Fork’s waters flow,
Where the cattle are “a-browzin’,” an’ the Spanish ponies grow;
Where the Northers “come a-whistlin'” from beyond the Neutral Strip;
And the prairie dogs are sneezin’, as if they had “The Grip”;
Where the cayotes come a-howlin’ ’round the ranches after dark,
And the mocking-birds are singin’ to the lovely “medder lark”;
Where the ‘possum and the badger, and rattlesnakes abound,
And the monstrous stars are winkin’ o’er a wilderness profound;
Where lonesome, tawny prairies melt into airy streams,
While the Double Mountains slumber, in heavenly kinds of dreams;
Where the antelope is grazin’ and the lonely plovers call–
It was there that I attended “The Cowboys’ Christmas Ball.”

The town was Anson City, old Jones’s county seat,
Where they raised Polled Angus cattle, and waving whiskered wheat;
Where the air is soft and “bammy,” an’ dry an’ full of health,
And the prairies is explodin’ with agricultural wealth;
Where they print the Texas Western, that Hec. McCann supplies
With news and yarns and stories, uv most amazin’ size;
Where Frank Smith “pulls the badger,” on knowin’ tenderfeet,
And Democracy’s triumphant, and might hard to beat;
Where lives that good old hunter, John Milsap, from Lamar,
Who “used to be the Sheriff, back East, in Paris sah!”
‘T was there, I say, at Anson with the lovely “widder Wall,”
That I went to that reception, “The Cowboys’ Christmas Ball.”

The boys had left the ranches and come to town in piles;
The ladies–“kinder scatterin'”– had gathered in for miles.
And yet the place was crowded, as I remember well,
‘T was got for the occasion, at “The Morning Star Hotel.”
The music was a fiddle an’ a lively tambourine,
And a “viol came imported,” by the stage from Abilene.
The room was togged out gorgeous-with mistletoe and shawls,
And candles flickered frescoes, around the airy walls.
The “wimmin folks” looked lovely-the boys looked kinder treed,
Till their leader commenced yellin’: “Whoa! fellers, let’s stampede,”
And the music started sighin’, an’ awailin’ through the hall
As a kind of introduction to “The Cowboys’ Christmas Ball.”

The leader was a feller that came from Swenson’s ranch,
They called him “Windy Billy,” from “little Deadman’s Branch.”
His rig was “kinder keerless,” big spurs and high-heeled boots;
He had the reputation that comes when “fellers shoots.”
His voice was like a bugle upon the mountain’s height;
His feet were animated an’ a mighty, movin’ sight,
When he commenced to holler, “Neow, fellers stake your pen!
“Lock horns ter all them heifers, an’ russle ’em like men.
“Saloot yer lovely critters; neow swing an’ let ’em go,
“Climb the grape vine ’round ’em–all hands do-ce-do!
“You Mavericks, jine the round-up- Jest skip her waterfall,”
Huh!  hit wuz gettin’ happy, “The Cowboys’ Christmas Ball”

The boys were tolerable skittish, the ladies powerful neat,
That old bass viol’s music just got there with both feet!
That wailin’, frisky fiddle, I never shall forget;
And Windy kept a-singin’-I think I hear him yet-
“Oh Xes, chase yer squirrels, an’ cut ’em to one side;
“Spur Treadwell to the centre, with Cross P Charley’s bride;
“Doc. Hollis down the middle, an’ twine the ladies’ chain;
“Varn Andrews pen the fillies in big T Diamond’s train.
“All pull yer freight together, neow swallow fork an’ change;
“‘Big Boston,’ lead the trail herd, through little Pitchfork’s range.
“Purr ’round yer gentle kittens, now rope ’em! Balance all!”
Huh!  hit wuz gettin’ active–“The Cowboys’ Christmas Ball!”

The dust riz fast an’ furious; we all jes’ galloped ’round,
Till the scenery got so giddy that T Bar Dick was downed.
We buckled to our partners, an’ told ’em to hold on,
Then shook our hoofs like lightning, until the early dawn.
Don’t tell me ’bout cotillions, or germans. No sire ‘ee!
That whirl at Anson City just takes the cake with me.
I’m sick of lazy shufflin’s, of them I’ve had my fill,
Give me a frontier break-down, backed up by Windy Bill.
McAllister ain’t nowhar: when Windy leads the show,
I’ve seen ’em both in harness, and so I sorter know–
Oh, Bill, I sha’n’t forget yer, and I’ll oftentimes recall,
That lively gaited sworray–“The Cowboys’ Christmas Ball.”