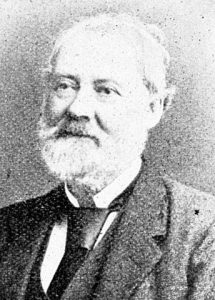 [This is taken from William Dean Howells’ My Literary Passions.]

This was the winter when my friend Piatt and I made our first literary venture together in those ‘Poems of Two Friends;’ which hardly passed the circle of our amity; and it was altogether a time of high literary exaltation with me. I walked the streets of the friendly little city by day and by night with my head so full of rhymes and poetic phrases that it seemed as if their buzzing might have been heard several yards away; and I do not yet see quite how I contrived to keep their music out of my newspaper paragraphs. Out of the newspaper I could not keep it, and from time to time I broke into verse in its columns, to the great amusement of the leading editor, who knew me for a young man with a very sharp tooth for such self-betrayals in others. He wanted to print a burlesque review he wrote of the ‘Poems of Two Friends’ in our paper, but I would not suffer it. I must allow that it was very, funny, and that he was always a generous friend, whose wounds would have been as faithful as any that could have been dealt me then. He did not indeed care much for any poetry but that of Shakespeare and the ‘Ingoldsby Legends;’ and when one morning a State Senator came into the office with a volume of Tennyson, and began to read,

“The poet in a golden clime was born,
With golden stars above;
Dowered with the hate of hate, the scorn of scorn
The love of love,”

he hitched his chair about, and started in on his leader for the day.

He might have been more patient if he had known that this State Senator was to be President Garfield. But who could know anything of the tragical history that was so soon to follow that winter of 1859-60?  Not I; at least I listened rapt by the poet and the reader, and it seemed to me as if the making and the reading of poetry were to go on forever, and that was to be all there was of it. To be sure I had my hard little journalistic misgivings that it was not quite the thing for a State Senator to come round reading Tennyson at ten o’clock in the morning, and I dare say I felt myself superior in my point of view, though I could not resist the charm of the verse. I myself did not bring Tennyson to the office at that time. I brought Thackeray, and I remember that one day when I had read half an hour or so in the ‘Book of Snobs,’ the leading editor said frankly, Well, now, he guessed we had had enough of that.  He apologized afterwards as if he were to blame, and not I, but I dare say I was a nuisance with my different literary passions, and must have made many of my acquaintances very tired of my favorite authors. I had some consciousness of the fact, but I could not help it.

I ought not to omit from the list of these favorites an author who was then beginning to have his greatest vogue, and who somehow just missed of being a very great one. We were all reading his jaunty, nervy, knowing books, and some of us were questioning whether we ought not to set him above Thackeray and Dickens and George Eliot, ‘tulli quanti’, so great was the effect that Charles Reade had with our generation. He was a man who stood at the parting of the ways between realism and romanticism, and if he had been somewhat more of a man he might have been the master of a great school of English realism; but, as it was, he remained content to use the materials of realism and produce the effect of romanticism. He saw that life itself infinitely outvalued anything that could be feigned about it, but its richness seemed to corrupt him, and he had not the clear, ethical conscience which forced George Eliot to be realistic when probably her artistic prepossessions were romantic.

As yet, however, there was no reasoning of the matter, and Charles Reade was writing books of tremendous adventure and exaggerated character, which he prided himself on deriving from the facts of the world around him. He was intoxicated with the discovery he had made that the truth was beyond invention, but he did not know what to do with the truth in art after he had found it in life, and to this day the English mostly do not. We young people were easily taken with his glittering error, and we read him with much the same fury, that he wrote. ‘Never Too Late to Mend;’ ‘Love Me Little, Love Me Long;’ ‘Christie Johnstone;’ ‘Peg Woffington;’ and then, later, ‘Hard Cash,’ ‘The Cloister and the Hearth,’ ‘Foul Play,’ ‘Put Yourself in His Place’—how much they all meant once, or seemed to mean!

The first of them, and the other poems and fictions I was reading, meant more to me than the rumors of war that were then filling the air, and that so soon became its awful actualities. To us who have our lives so largely in books the material world is always the fable, and the ideal the fact. I walked with my feet on the ground, but my head was in the clouds, as light as any of them. I neither praise nor blame this fact; but I feel bound to own it, for that time, and for every time in my life, since the witchery of literature began with me.

Those two happy winters in Columbus, when I was finding opportunity and recognition, were the heydey of life for me. There has been no time like them since, though there have been smiling and prosperous times a plenty; for then I was in the blossom of my youth, and what I had not I could hope for without unreason, for I had so much of that which I had most desired. Those times passed, and there came other times, long years of abeyance, and waiting, and defeat, which I thought would never end, but they passed, too.

I got my appointment of Consul to Venice, and I went home to wait for my passport and to spend the last days, so full of civic trouble, before I should set out for my post. If I hoped to serve my country there and sweep the Confederate cruisers from the Adriatic, I am afraid my prime intent was to add to her literature and to my own credit. I intended, while keeping a sleepless eye out for privateers, to write poems.  concerning American life which should eclipse anything yet done in that kind, and in the mean time I read voraciously and perpetually, to make the days go swiftly which I should have been so glad to have linger. In this month I devoured all the ‘Waverley novels,’ but I must have been devouring a great many others, for Charles Reade’s ‘Christie Johnstone’ is associated with the last moment of the last days.

A few months ago I was at the old home, and I read that book again, after not looking at it for more than thirty years; and I read it with amazement at its prevailing artistic vulgarity, its prevailing aesthetic error shot here and there with gleams of light, and of the truth that Reade himself was always dimly groping for. The book is written throughout on the verge of realism, with divinations and conjectures across its border, and with lapses into the fool’s paradise of romanticism, and an apparent content with its inanity and impossibility.  But then it was brilliantly new and surprising; it seemed to be the last word that could be said for the truth in fiction; and it had a spell that held us like an anesthetic above the ache of parting, and the anxiety for the years that must pass, with all their redoubled chances, before our home circle could be made whole again. I read on, and the rest listened, till the wheels of the old stage made themselves heard in their approach through the absolute silence of the village street. Then we shut the book and all went down to the gate together, and parted under the pale sky of the October night. There was one of the home group whom I was not to see again: the young brother who died in the blossom of his years before I returned from my far and strange sojourn. He was too young then to share our reading of the novel, but when I ran up to his room to bid him goodbye I found him awake, and, with aching hearts, we bade each other good-by forever!